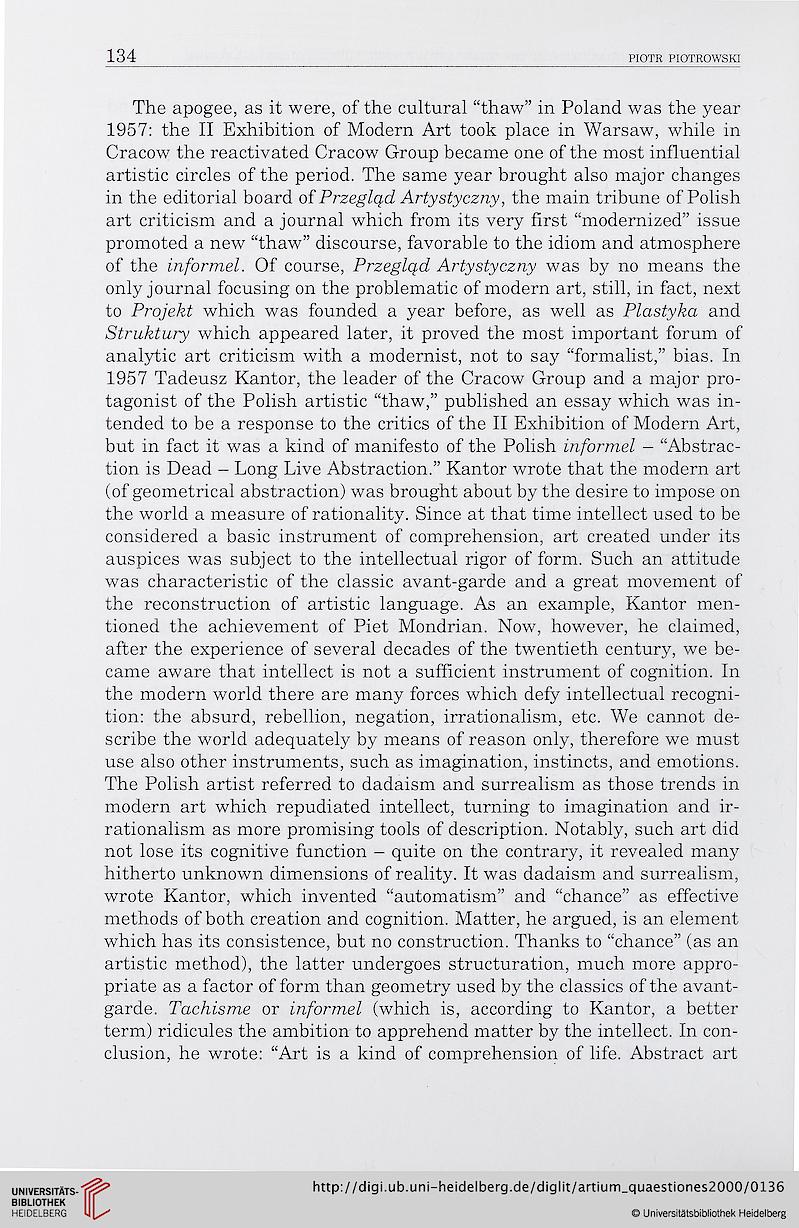 The apogee, as it were, of the cultural “thaw” in Poland was the year
1957: the II Exhibition of Modem Art took place in Warsaw, while in
Cracow the reactivated Cracow Group became one of the rnost influential
artistic circles of the period. The same year brought also major changes
in the éditorial board of Przeglqd Artystyczny, the main tribune of Polish
art criticism and a journal which from its very first “modernized” issue
promoted a new “thaw” discourse, favorable to the idiom and atmosphère
of the informel. Of course, Przeglqd Artystyczny was by no means the
only journal focusing on the problematic of modem art, still, in fact, next
to Projekt which was founded a year before, as well as Plastyka and
Struktury which appeared later, it proved the most important forum of
analytic art criticism with a modernist, not to say “formalist,” bias. In
1957 Tadeusz Kantor, the leader of the Cracow Group and a major pro-
tagonist of the Polish artistic “thaw,” published an essay which was in-
tended to be a response to the critics of the II Exhibition of Modem Art,
but in fact it was a kind of manifesto of the Polish informel - “Abstrac-
tion is Dead - Long Live Abstraction.” Kantor wrote that the modem art
(of geometrical abstraction) was brought about by the desire to impose on
the world a measure of rationality. Since at that time intellect used to be
considered a basic instrument of compréhension, art created under its
auspices was subject to the intellectual rigor of form. Such an attitude
was characteristic of the classic avant-garde and a great movement of
the reconstruction of artistic language. As an example, Kantor men-
tioned the achievement of Piet Mondrian. Now, however, he claimed,
after the expérience of several décades of the twentieth century, we be-
came aware that intellect is not a suffïcient instrument of cognition. In
the modem world there are many forces which defy intellectual récogni-
tion: the absurd, rébellion, négation, irrationalism, etc. We cannot de-
scribe the world adequately by means of reason only, therefore we must
use also other instruments, such as imagination, instincts, and émotions.
The Polish artist referred to dadaism and surrealism as those trends in
modem art which repudiated intellect, turning to imagination and ir-
rationalism as more promising tools of description. Notably, such art did
not lose its cognitive fonction - quite on the contrary, it revealed many
hitherto unknown dimensions of reality. It was dadaism and surrealism,
wrote Kantor, which invented “automatism” and “chance” as effective
methods of both création and cognition. Matter, he argued, is an element
which has its consistence, but no construction. Thanks to “chance” (as an
artistic method), the latter undergoes structuration, much more appro-
priate as a factor of form than geometry used by the classics of the avant-
garde. Tachisme or informel (which is, according to Kantor, a better
term) ridicules the ambition to apprehend matter by the intellect. In con-
clusion, he wrote: “Art is a kind of compréhension of life. Abstract art