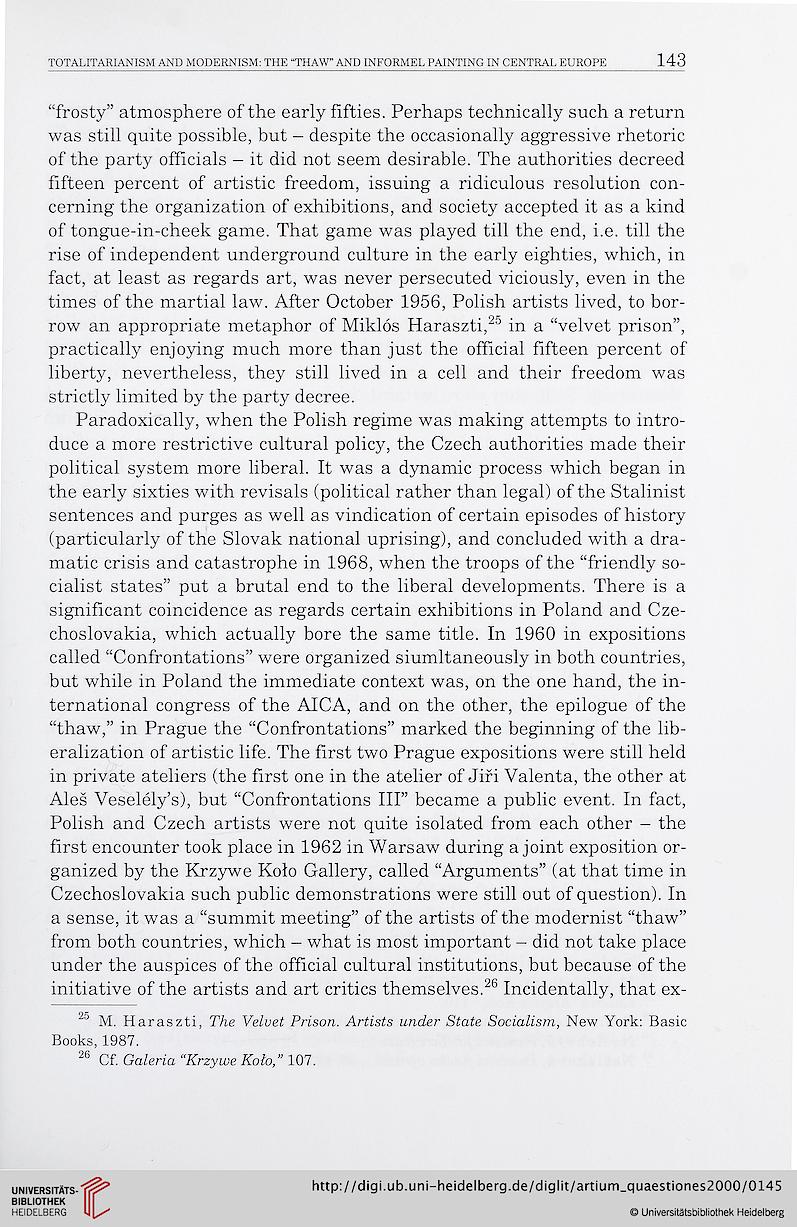 “frosty” atmosphère of the early fifties. Perhaps technically such a return
was still quite possible, but - despite the occasionally aggressive rhetoric
of the party officiais - it did not seem désirable. The authorities decreed
fifteen percent of artistic freedom, issuing a ridiculous resolution con-
cerning the organization of exhibitions, and society accepted it as a kind
of tongue-in-cheek game. That game was played till the end, i.e. till the
rise of independent underground culture in the early eighties, which, in
fact, at least as regards art, was never persecuted viciously, even in the
times of the martial law. After October 1956, Polish artists lived, to bor-
row an appropriate metaphor of Miklôs Haraszti,25 in a “velvet prison”,
practically enjoying much more than just the official fifteen percent of
liberty, nevertheless, they still lived in a cell and their freedom was
strictly limited by the party decree.

Paradoxically, when the Polish régime was making attempts to intro-
duce a more restrictive cultural policy, the Czech authorities made their
political System more liberal. It was a dynamic process which began in
the early sixties with révisais (political rather than legal) of the Stalinist
sentences and purges as well as vindication of certain épisodes of history
(particularly of the Slovak national uprising), and concluded with a dra-
matic crisis and catastrophe in 1968, when the troops of the “friendly so-
cialist states” put a brutal end to the liberal developments. There is a
significant coincidence as regards certain exhibitions in Poland and Cze-
choslovakia, which actually bore the same title. In 1960 in expositions
called “Confrontations” were organized siumltaneously in both countries,
but while in Poland the immédiate context was, on the one hand, the in-
ternational congress of the AICA, and on the other, the épilogue of the
“thaw,” in Prague the “Confrontations” marked the beginning of the lib-
eralization of artistic life. The fïrst two Prague expositions were still held
in private ateliers (the fïrst one in the atelier of Jiri Valenta, the other at
Aies Veselély’s), but “Confrontations III” became a public event. In fact,
Polish and Czech artists were not quite isolated from each other - the
fïrst encounter took place in 1962 in Warsaw during a joint exposition or-
ganized by the Krzywe Kolo Gallery, called “Arguments” (at that time in
Czechoslovakia such public démonstrations were still out of question). In
a sense, it was a “summit meeting” of the artists of the modernist “thaw”
from both countries, which - what is most important - did not take place
under the auspices of the official cultural institutions, but because of the
initiative of the artists and art critics themselves.26 Incidentally, that ex-