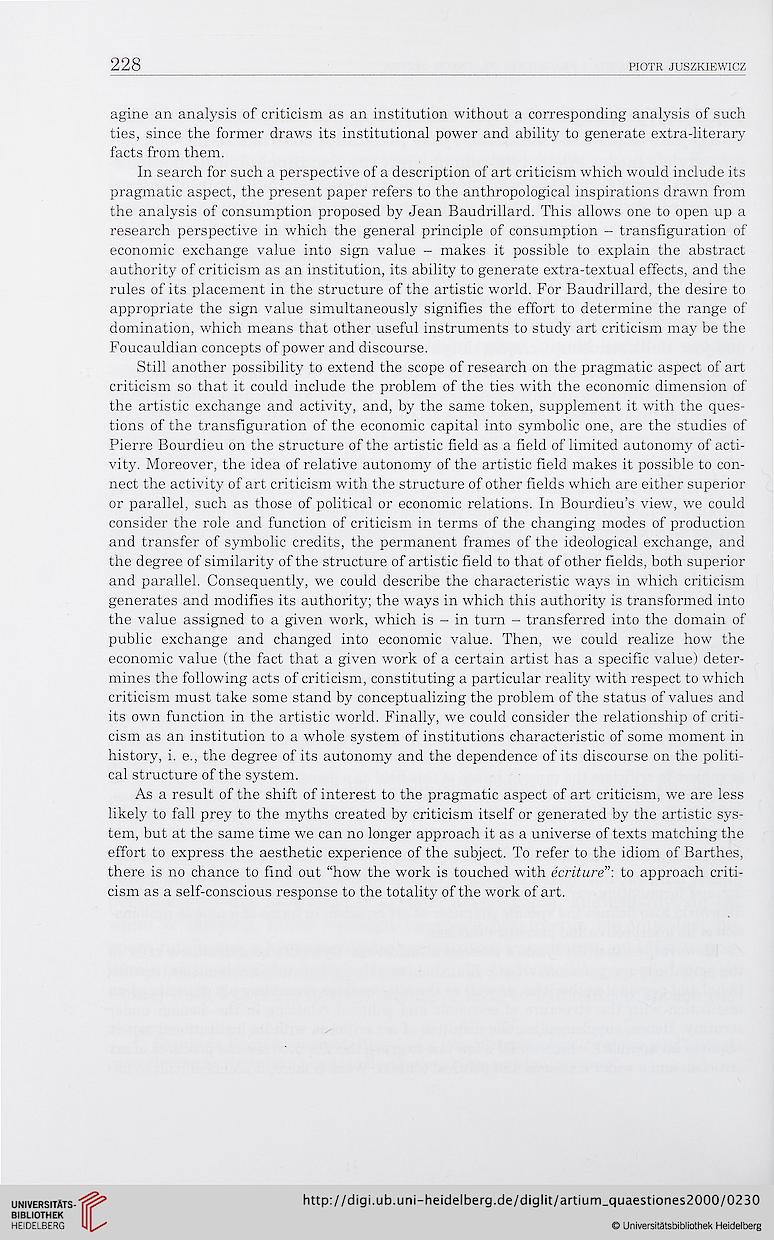 agine an analysis of criticism as an institution without a corresponding analysis of such
ties, since the former draws its institutional power and ability to generate extra-literary
facts from them.

In search for such a perspective of a description of art criticism which would include its
pragmatic aspect, the présent paper refers to the anthropological inspirations drawn from
the analysis of consumption proposed by Jean Baudrillard. This allows one to open up a
research perspective in which the general principle of consumption - transfiguration of
économie exchange value into sign value - makes it possible to explain the abstract
authority of criticism as an institution, its ability to generate extra-textual effects, and the
rules of its placement in the structure of the artistic world. For Baudrillard, the desire to
appropriate the sign value simultaneously signifies the effort to détermine the range of
domination, which means that other useful instruments to study art criticism may be the
Foucauldian concepts of power and discourse.

Still another possibility to extend the scope of research on the pragmatic aspect of art
criticism so that it could include the problem of the ties with the économie dimension of
the artistic exchange and activity, and, by the same token, supplément it with the ques-
tions of the transfiguration of the économie capital into symbolic one, are the studies of
Pierre Bourdieu on the structure of the artistic field as a field of limited autonomy of acti-
vity. Moreover, the idea of relative autonomy of the artistic field makes it possible to con-
nect the activity of art criticism with the structure of other fields which are either superior
or parallel, such as those of political or économie relations. In Bourdieu’s view, we could
consider the rôle and function of criticism in terms of the changing modes of production
and transfer of symbolic crédits, the permanent frames of the ideological exchange, and
the degree of similarity of the structure of artistic field to that of other fields, both superior
and parallel. Consequently, we could describe the characteristic ways in which criticism
generates and modifies its authority; the ways in which this authority is transformed into
the value assigned to a given work, which is - in tum - transferred into the domain of
public exchange and changed into économie value. Then, we could realize how the
économie value (the fact that a given work of a certain artist has a spécifie value) déter-
mines the following acts of criticism, constituting a particular reality with respect to which
criticism must take some stand by conceptualizing the problem of the status of values and
its own function in the artistic world. Finally, we could consider the relationship of criti-
cism as an institution to a whole System of institutions characteristic of some moment in
history, i. e., the degree of its autonomy and the dependence of its discourse on the politi-
cal structure of the System.

As a resuit of the shift of interest to the pragmatic aspect of art criticism, we are less
likely to fall prey to the myths created by criticism itself or generated by the artistic Sys-
tem, but at the same time we can no longer approach it as a universe of texts matching the
effort to express the aesthetic expérience of the subject. To refer to the idiom of Barthes,
there is no chance to find out “how the work is touched with écritureto approach criti-
cism as a self-conscious response to the totality of the work of art.