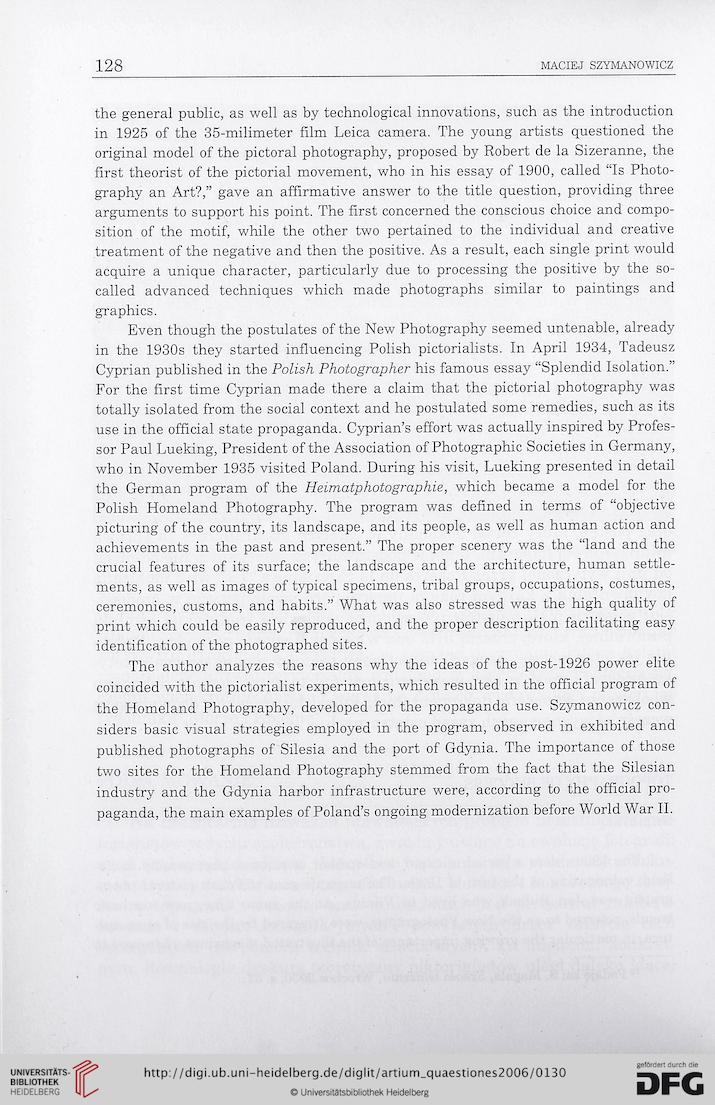 the generał public, as well as by technological innovations, such as the introduction
in 1925 of the 35-milimeter film Leica camera. The young artists ąnestioned the
original model of the pictoral photography, proposed by Robert de la Sizeranne, the
first theorist of the pictorial movement, who in his essay of 1900, called “Is Photo-
graphy an Art?,” gave an affirmative answer to the title ąuestion, providing three
arguments to support his point. The first concerned the conscious choice and compo-
sition of the motif, while the other two pertained to the individual and creative
treatment of the negative and then the positive. As a result, each single print would
acąuire a nniąue character, particularly due to processing the positive by the so-
called advanced techniąues which madę photographs similar to paintings and
graphics.
Even though the postulates of the New Photography seemed untenable, already
in the 1930s they started influencing Polish pictorialists. In April 1934, Tadeusz
Cyprian published in the Polish Photographer his famous essay “Splendid Isolation.”
For the first time Cyprian madę there a claim that the pictorial photography was
totally isolated from the social context and he postulated some remedies, such as its
use in the official state propaganda. Cyprian’s effort was actually inspired by Profes-
sor Paul Lueking, President of the Association of Photographic Societies in Germany,
who in November 1935 visited Poland. During his visit, Lueking presented in detail
the German program of the Heimatphotographie, which became a model for the
Polish Homeland Photography. The program was defined in terms of “objective
picturing of the country, its landscape, and its people, as well as human action and
achievements in the past and present.” The proper scenery was the “land and the
crucial features of its surface; the landscape and the architecture, human settle-
ments, as well as images of typical specimens, tribal groups, occupations, costumes,
ceremonies, customs, and habits.” What was also stressed was the high ąuality of
print which could be easily reproduced, and the proper description facilitating easy
identification of the photographed sites.
The author analyzes the reasons why the ideas of the post-1926 power elite
coincided with the pictorialist experiments, which resulted in the official program of
the Homeland Photography, developed for the propaganda use. Szymanowicz con-
siders basie visual strategies employed in the program, observed in exhibited and
published photographs of Silesia and the port of Gdynia. The importance of those
two sites for the Homeland Photography stemmed from the fact that the Silesian
industry and the Gdynia harbor infrastructure were, according to the official pro-
paganda, the main examples of Poland’s ongoing modernization before World War II.