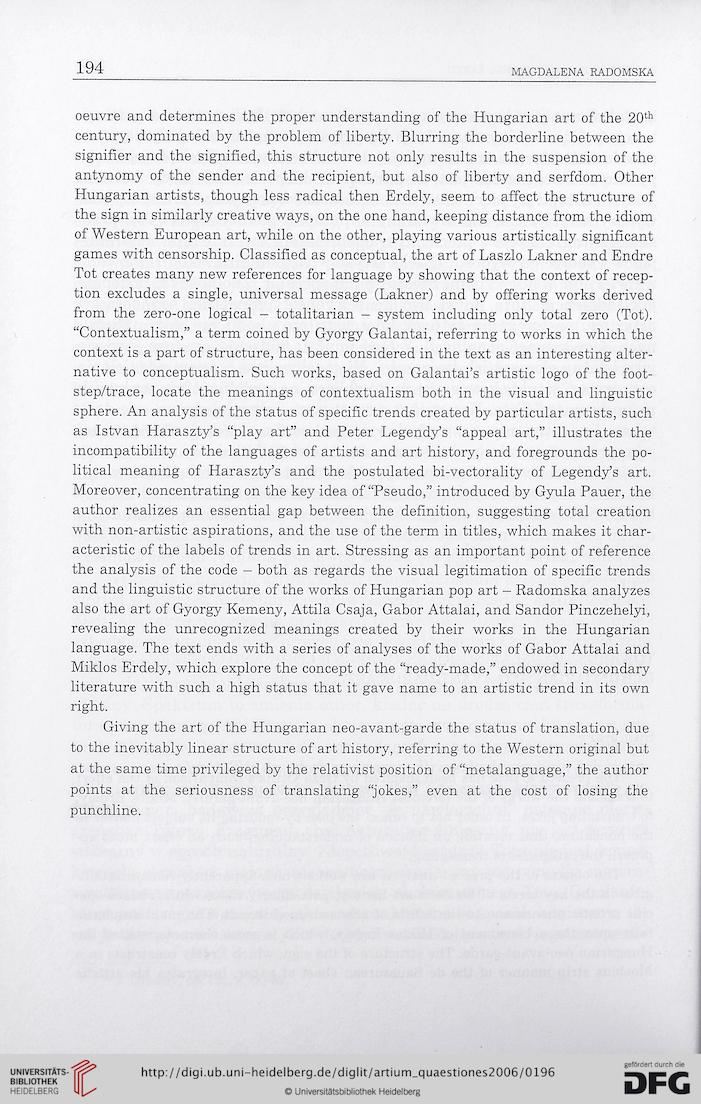 oeuvre and determines the proper understanding of the Hungarian art of the 20th
century, dominated by the problem of liberty. Blurring the borderline between the
signifier and the signified, this structure not only results in the suspension of the
antynomy of the sender and the recipient, but also of liberty and serfdom. Other
Hungarian artists, though less radical then Erdely, seem to affect the structure of
the sign in similarly creative ways, on the one hand, keeping distance from the idiom
of Western European art, while on the other, playing various artistically significant
games with censorship. Classified as conceptual, the art of Laszlo Lakner and Endre
Tot creates many new references for language by showing that the context of recep-
tion excludes a single, universal message (Lakner) and by offering works derived
from the zero-one logical - totalitarian - system including only total zero (Tot).
“Contextualism,” a term coined by Gyorgy Galantai, referring to works in which the
context is a part of structure, has been considered in the text as an interesting alter-
native to conceptualism. Such works, based on Galantai’s artistic logo of the foot-
step/trace, locate the meanings of contextualism both in the visual and linguistic
sphere. An analysis of the status of specific trends created by particular artists, such
as Istvan Haraszty’s “play art” and Peter Legendy’s “appeal art,” illustrates the
incompatibility of the languages of artists and art history, and foregrounds the po-
litical meaning of Haraszty’s and the postulated bi-vectorality of Legendy’s art.
Moreover, concentrating on the key idea of “Pseudo,” introduced by Gyula Pauer, the
author realizes an essential gap between the definition, suggesting total creation
with non-artistic aspirations, and the use of the term in titles, which makes it char-
acteristic of the labels of trends in art. Stressing as an important point of reference
the analysis of the codę - both as regards the yisual legitimation of specific trends
and the linguistic structure of the works of Hungarian pop art - Radomska analyzes
also the art of Gyorgy Kemeny, Attila Csaja, Gabor Attalai, and Sandor Pinczehelyi,
revealing the unrecognized meanings created by their works in the Hungarian
language. The text ends with a series of analyses of the works of Gabor Attalai and
Miklos Erdely, which explore the concept of the “ready-made,” endowed in secondary
literaturę with such a high status that it gave name to an artistic trend in its own
right.
Giving the art of the Hungarian neo-avant-garde the status of translation, due
to the inevitably linear structure of art history, referring to the Western original but
at the same time privileged by the relativist position of “metalanguage,” the author
points at the seriousness of translating “jokes,” even at the cost of losing the
punchline.