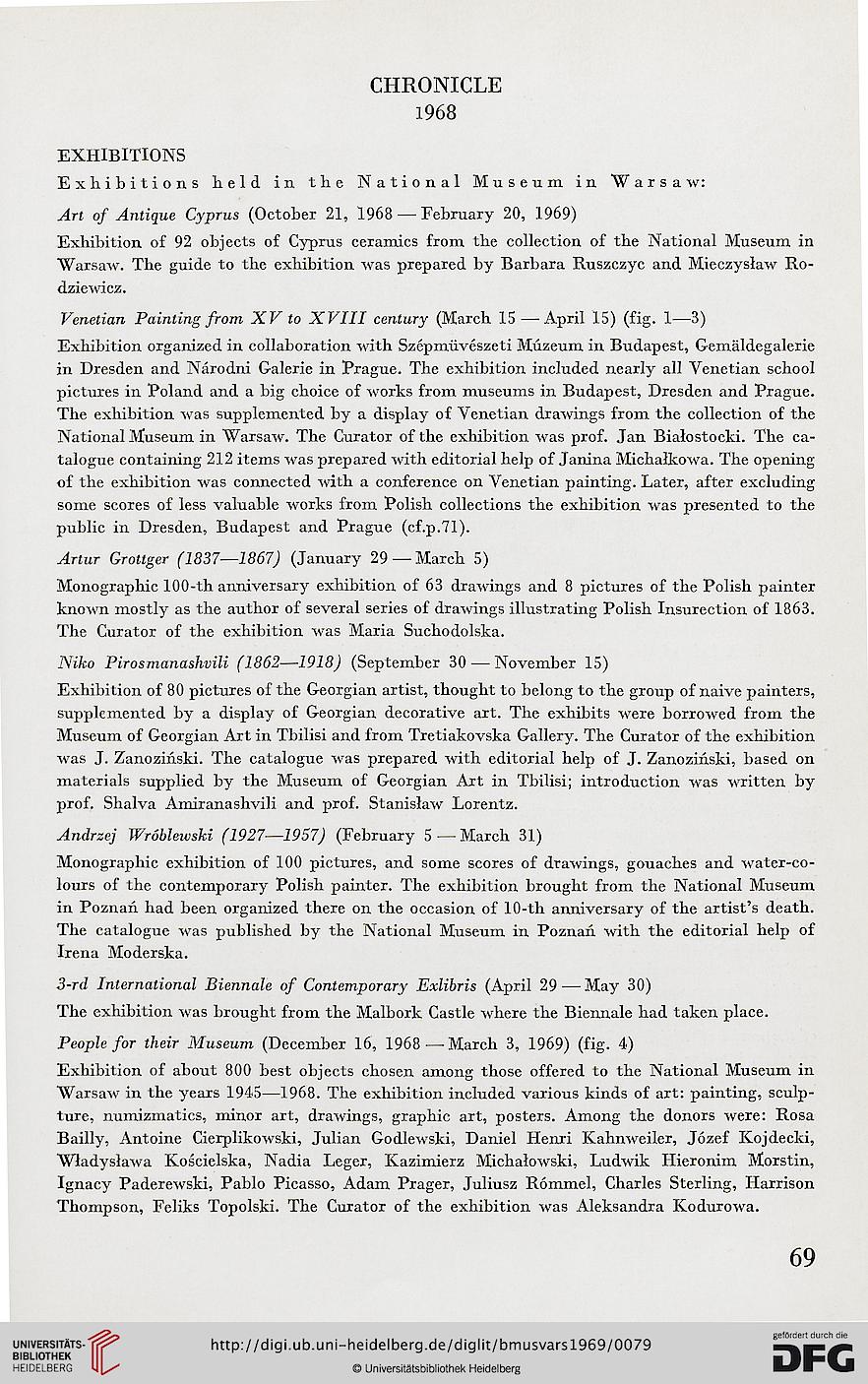 Exhibition of 92 objects of Cyprus ceramics frorn the collection of the National Museum in
Warsaw. The guide to the exhibition was prepared by Barbara Ruszczyć and Mieczysław Ro-
dziewicz.

Venetian Painting from XV to XVIII century (March 15 —April 15) (fig. 1—3)
Exhibition organized in collaboration with Szepmuveszeti Muzeum in Budapest, Gemaldegalerie
in Dresden and Narodni Galerie in Prague. The exhibition included nearly all Venetian school
pictures in Poland and a big choice of works from museums in Budapest, Dresden and Prague.
The exhibition was supplemented by a display of Venetian drawings from the collection of the
National Museum in Warsaw. The Curator of the exhibition was prof. Jan Białostocki. The ca-
talogue containing 212 items was prepared with editorial help of Janina Michałkowa. The opening
of the exhibition was connected with a conference on Venetian painting. Later, after excluding
some scores of less valuable works from Polish collections the exhibition was presented to the
public in Dresden, Budapest and Prague (cf.p.71).

Monographic 100-th anniversary exhibition of 63 drawings and 8 pictures of the Polish painter
known mostly as the author of several series of drawings illustrating Polish Insurection of 1863.
The Curator of the exhibition was Maria Suchodolska.

Exhibition of 80 pictures of the Georgian artist, thought to belong to the group of naive painters,
supplemented by a display of Georgian decorative art. The exhibits were borrowed from the
Museum of Georgian Art in Tbilisi and from Tretiakovska Gallery. The Curator of the exhibition
was J. Zanoziński. The catalogue was prepared with editorial help of J. Zanoziński, based on
materials supplied by the Museum of Georgian Art in Tbilisi; introduction was written by
prof. Shalva Amiranaslwili and prof. Stanisław Lorentz.

Monographic exhibition of 100 pictures, and some scores of drawings, gouaches and water-co-
lours of the contemporary Polish painter. The exhibition brought from the National Museum
in Poznań had been organized there on the occasion of 10-th anniversary of the artist's death.
The catalogue was published by the National Museum in Poznań with the editorial help of
Irena Moderska.

The exhibition was brought from the Malbork Castle where the Biennale had taken place.