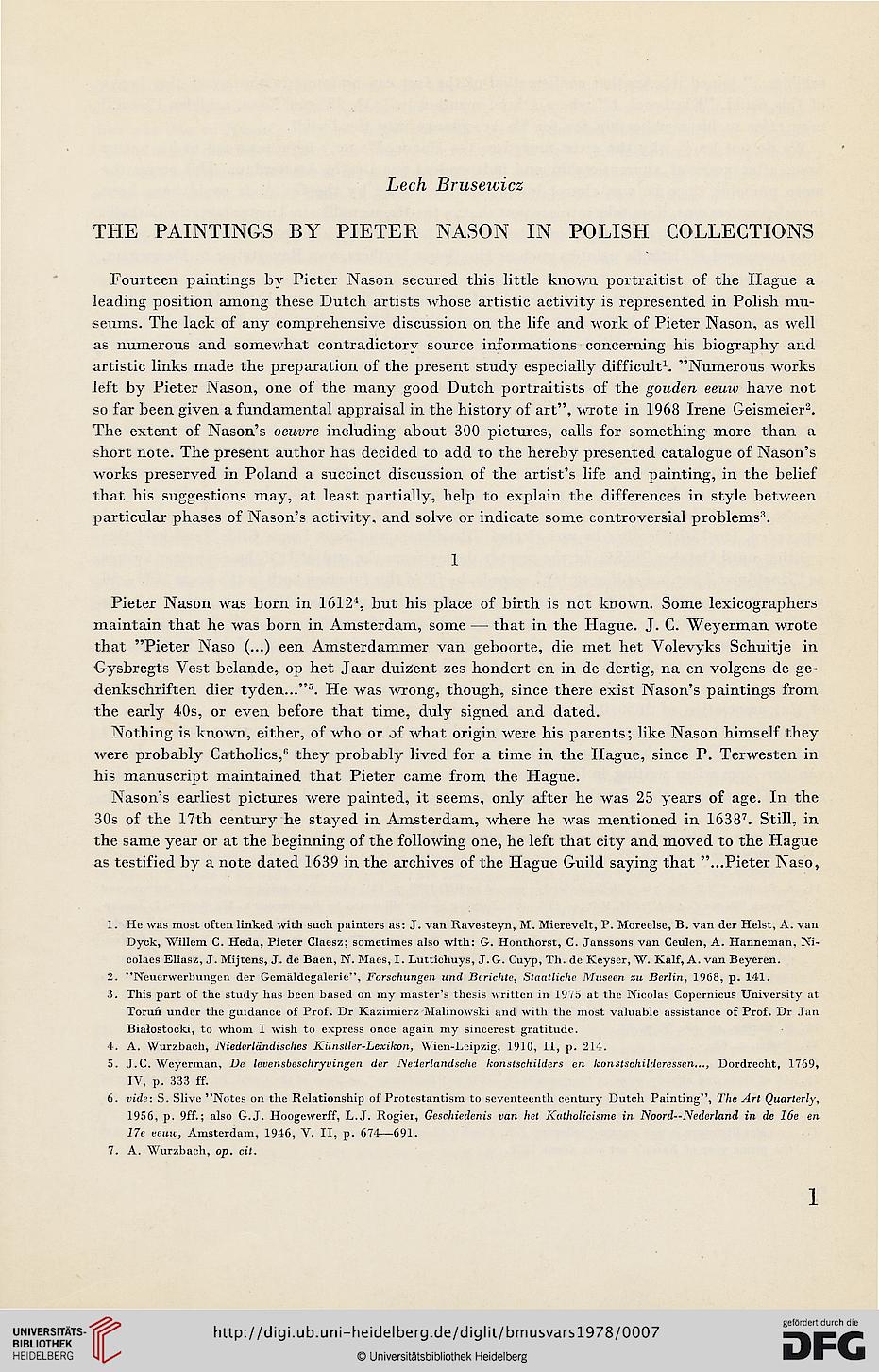 THE PAINTINGS BY PIETER NASON IN POLISH COLLECTIONS

Fourteen paintings by Pieter Nason secured this little knowu portraitist of the Hague a
leading position among these Dutch artists whose artistic activity is represented in Polish mu-
seums. The lack of any compreheiisive discussion on the life and work of Pieter Nason, as well
as numerous and somewhat contradictory source informations concerning his biography and
artistic links made the preparation of the present study especially difficult1. "Numerous works
left by Pieter Nason, one of the many good Dutch portraitists of the gouden eeuw have not
so far been given a fundamental appraisal in the history of art", wrote in 1968 Irenę Geismeier2.
The extent of Nason's oeuvre including about 300 pictures, calls for something more than a
short note. The present author has decided to add to the hereby presented catalogue of Nason's
works preserved in Poland a succinct discussion of the artist's life and painting, in the bclief
that his suggestions may, at least partially, help to explain the differences in style between
particular phases of Nason's activity, and solve or indicate some controversial problems3.

Pieter Nason was born in 16124, but his place of birth is not known. Some lexicographers
maintain that he was born in Amsterdam, some — that in the Hague. J. C. Weyerman wrote
that "Pieter Naso (...) een Amsterdammer van geboorte, die met het Volevyks Schuitje in
Gysbregts Vest belande, op het Jaar duizent zes hondert en in de dertig, na en volgens de ge-
denkschriften dier tyden..."5. He was wrong, though, sińce there exist Nason's paintings from
the early 40s, or even before that time, duły signed and dated.

Nothing is known, either, of who or of what origin were his parents; like Nason himself they
were probably Catholics,6 they probably lived for a time in the Hague, sińce P. Terwesten in
his manuscript maintained that Pieter came from the Hague.

Nason's earliest pictures were painted, it seems, only after he was 25 years of age. In the
30s of the 17th century he stayed in Amsterdam, where he was mentioned in 16387. Still, in
the same year or at the beginning of the following one, he left that city and moved to the Hague
as testified by a note dated 1639 in the archives of the Hague Guild saying that "...Pieter Naso,

3. This part of the study has been based on my master's thesis written in 1975 at the Nicolas Copernicus TJniversity at
Toruń undcr the guidance of Prof. Dr Kazimierz'Malinowski and with the most valuable assistance of Prof. Dr Jan
Białostocki, to whom I wish to express once again my sincerest gratitude.