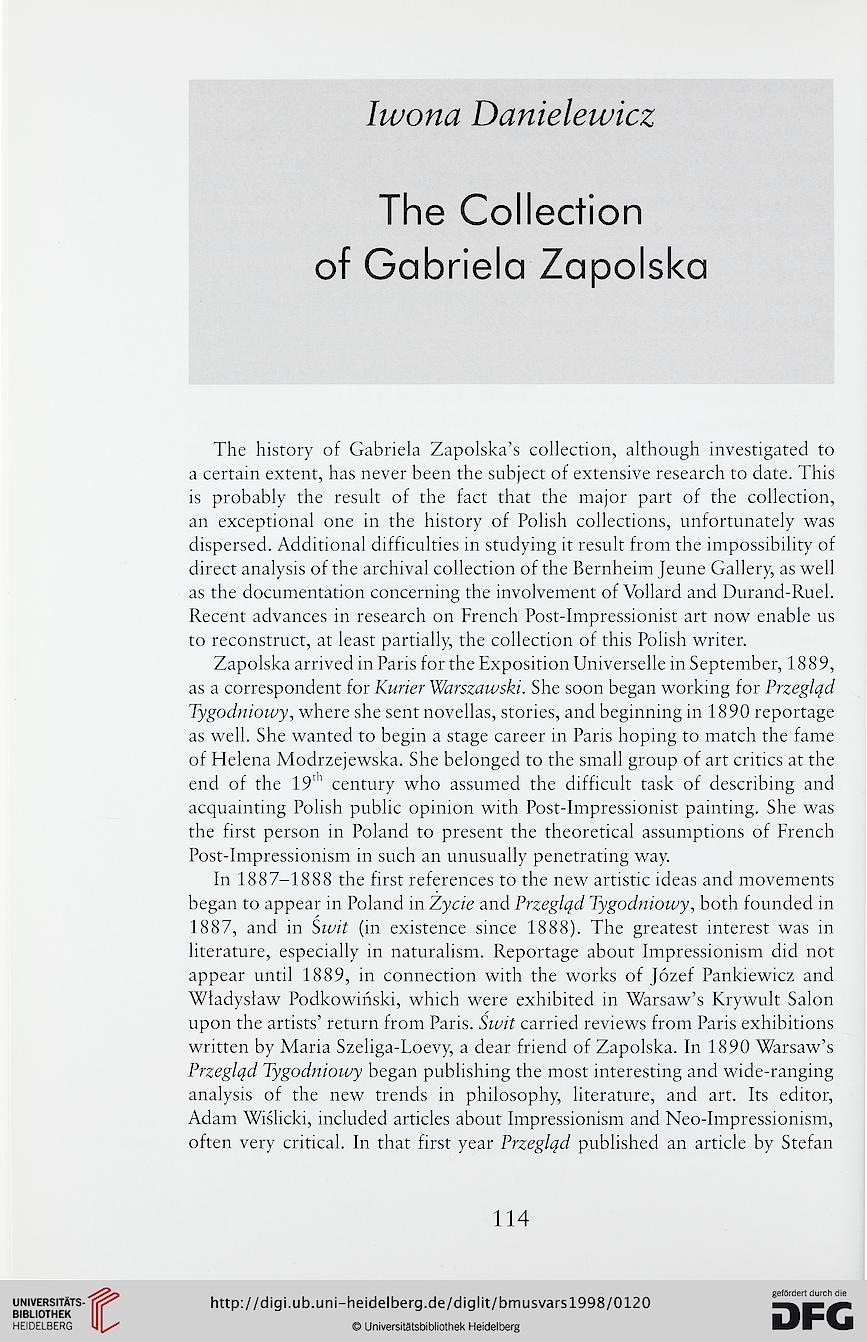 The Collection
of Gabriela Zapolska

The history of Gabriela Zapolska’s collection, although investigated to
a certain extent, has never been the subject of extensive research to datę. This
is probably the result of the fact that the major part of the collection,
an exceptional one in the history of Polish collections, unfortunately was
dispersed. Additional difficulties in studying lt result from the lmpossibility of
direct analysis of the archival collection of the Bernheim Jeune Gallery, as well
as the documentation concerning the involvement of Vollard and Durand-Ruel.
Recent advances in research on French Post-Impressionist art now enable us
to reconstruct, at least partially, the collection of this Polish writer.

Zapolska arrived in Paris for the Exposition Universelle in September, 1889,
as a correspondent for Kurier Warszawski. She soon began working for Przegląd
Tygodniowy, where she sent novellas, stories, and beginnmg in 1890 reportage
as well. She wanted to begin a stage career in Paris hoping to match the famę
of Helena Modrzejewska. She belonged to the smali group of art critics at the
end of the 19th century who assumed the difficult task of describing and
acąuainting Polish public opimon with Post-Impressionist painting. She was
the first person in Poland to present the theoretical assumptions of French
Post-Impressionism in such an unusually penetrating way.

In 1887-1888 the first references to the new artistic ideas and movements
began to appear in Poland in Zycie and Przegląd Tygodniowy, both founded in
1887, and in Świt (in existence sińce 1888). The greatest interest was in
literaturę, especially in naturalism. Reportage about Impressionism did not
appear until 1889, in connection with the works of Józef Pankiewicz and
Władysław Podkowiński, which were exhibited in Warsaw’s Krywult Salon
upon the artists’ return from Paris. Świt carried reviews from Paris exhibitions
written by Maria Szeliga-Toevy, a dear friend of Zapolska. In 1890 Warsaw’s
Przegląd Tygodniowy began publishing the most interesting and wide-ranging
analysis of the new trends in philosophy, literaturę, and art. Its editor,
Adam Wiślicki, included articles about Impressionism and Neo-Impressionism,
often very critical. In that first year Przegląd published an article by Stefan