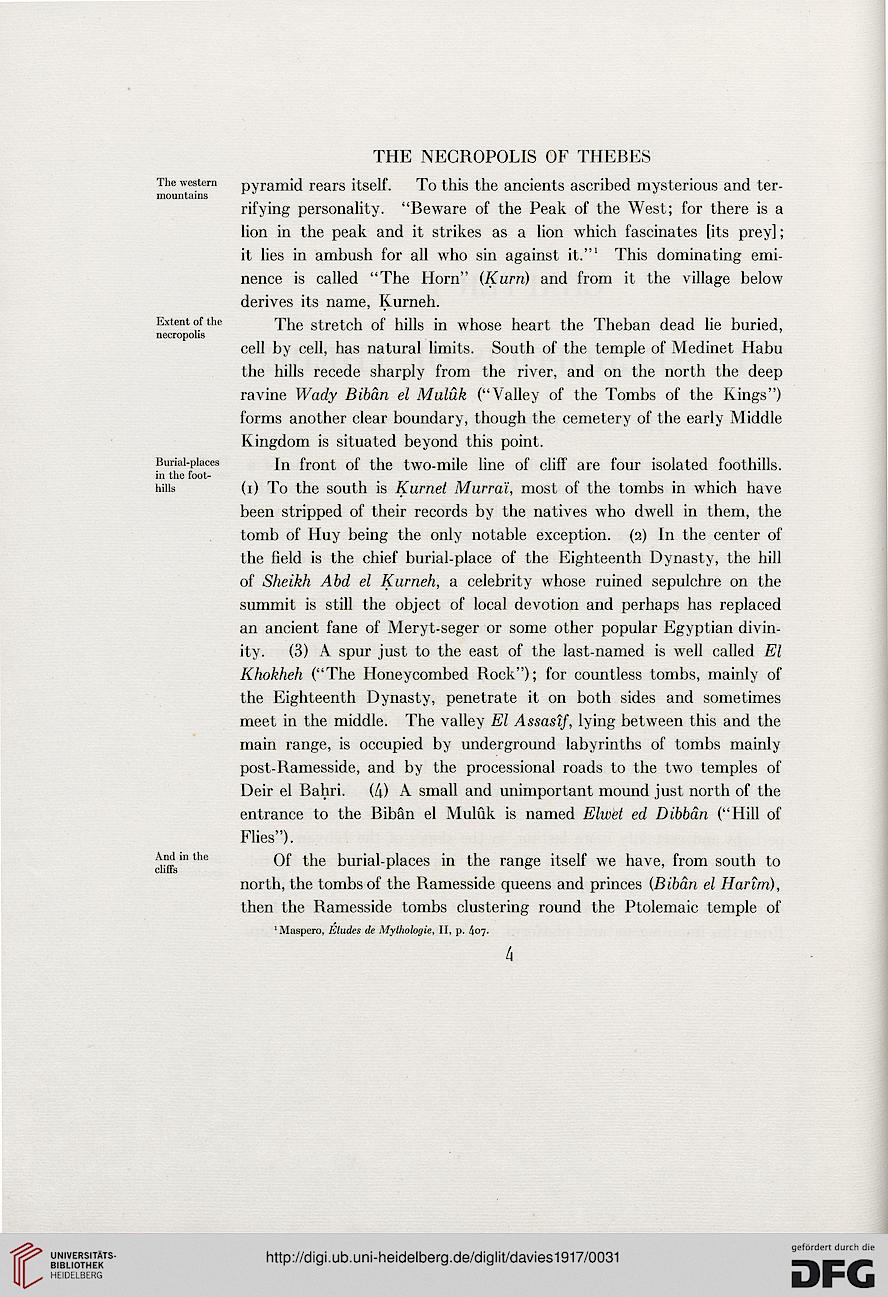 Extent of the
necropolis

Burial-places
in the foot-
hills

And in the
cliffs

THE NECROPOLIS OF THEBES

pyramid rears itself. To this the ancients ascribed mysterious and ter-
rifying personality. "Beware of the Peak of the West; for there is a
lion in the peak and it strikes as a lion which fascinates [its prey];
it lies in ambush for all who sin against it."1 This dominating emi-
nence is called "The Horn" (Kurn) and from it the village below
derives its name, Kurneh.

The stretch of hills in whose heart the Theban dead lie buried,
cell by cell, has natural limits. South of the temple of Medinet Habu
the hills recede sharply from the river, and on the north the deep
ravine Wady Biban el Muluk ("Valley of the Tombs of the Kings")
forms another clear boundary, though the cemetery of the early Middle
Kingdom is situated beyond this point.

In front of the two-mile line of cliff are four isolated foothills,
(i) To the south is Kurnet Murrai, most of the tombs in which have
been stripped of their records by the natives who dwell in them, the
tomb of Huy being the only notable exception. (2) In the center of
the field is the chief burial-place of the Eighteenth Dynasty, the hill
of Sheikh Abd el Kurneh, a celebrity whose ruined sepulchre on the
summit is still the object of local devotion and perhaps has replaced
an ancient fane of Meryt-seger or some other popular Egyptian divin-
ity. (3) A spur just to the east of the last-named is well called El
Khokheh ("The Honeycombed Rock"); for countless tombs, mainly of
the Eighteenth Dynasty, penetrate it on both sides and sometimes
meet in the middle. The valley El Assastf, lying between this and the
main range, is occupied by underground labyrinths of tombs mainly
post-Ramesside, and by the processional roads to the two temples of
Deir el Bahri. (4) A small and unimportant mound just north of the
entrance to the Biban el Muluk is named Elwel ed Dibbdn ("Hill of
Flies").

Of the burial-places in the range itself we have, from south to
north, the tombs of the Ramesside queens and princes {Biban el Harim),
then the Ramesside tombs clustering round the Ptolemaic temple of