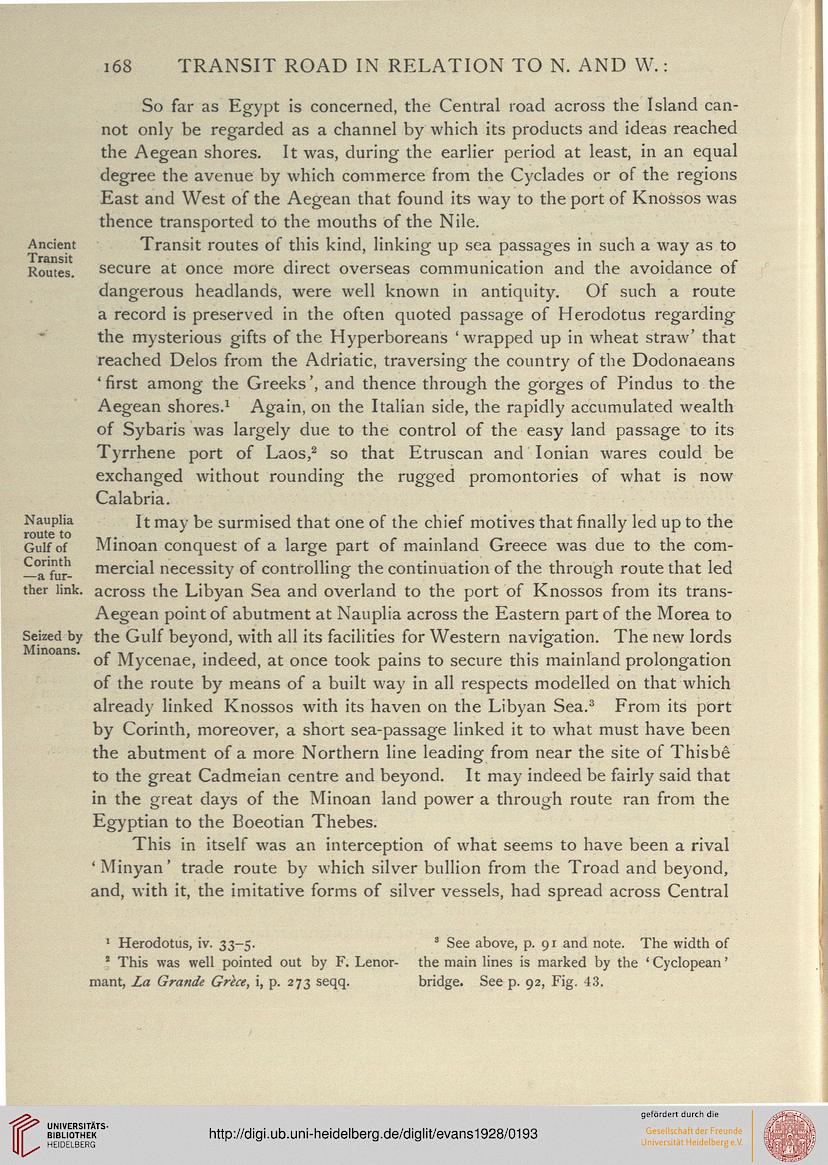 TRANSIT ROAD IN RELATION TO N. AND W.:

Nauplia
route to
Gulf of
Corinth
—a fur-
ther link.

So far as Egypt is concerned, the Central road across the Island can-
not only be regarded as a channel by which its products and ideas reached
the Aegean shores. It was, during the earlier period at least, in an equal
degree the avenue by which commerce from the Cyclades or of the regions
East and West of the Aegean that found its way to the port of Knossos was
thence transported to the mouths of the Nile.

Transit routes of this kind, linking up sea passages in such a way as to
secure at once more direct overseas communication and the avoidance of
dangerous headlands, were well known in antiquity. Of such a route
a record is preserved in the often quoted passage of Herodotus regarding
the mysterious gifts of the Hyperboreans 'wrapped up in wheat straw' that
reached Delos from the Adriatic, traversing the country of the Dodonaeans
' first among the Greeks', and thence through the gorges of Pindus to the
Aegean shores.1 Again, on the Italian side, the rapidly accumulated wealth
of Sybaris was largely due to the control of the easy land passage to its
Tyrrhene port of Laos,2 so that Etruscan and Ionian wares could be
exchanged without rounding the rugged promontories of what is now
Calabria.

It may be surmised that one of the chief motives that finally led up to the
Minoan conquest of a large part of mainland Greece was due to the com-
mercial necessity of controlling the continuation of the through route that led
across the Libyan Sea and overland to the port of Knossos from its trans-
Aegean point of abutment at Nauplia across the Eastern part of the Morea to
the Gulf beyond, with all its facilities for Western navigation. The new lords
of Mycenae, indeed, at once took pains to secure this mainland prolongation
of the route by means of a built way in all respects modelled on that which
already linked Knossos with its haven on the Libyan Sea.3 From its port
by Corinth, moreover, a short sea-passage linked it to what must have been
the abutment of a more Northern line leading from near the site of Thisbe
to the great Cadmeian centre and beyond. It may indeed be fairly said that
in the great clays of the Minoan land power a through route ran from the
Egyptian to the Boeotian Thebes.

This in itself was an interception of what seems to have been a rival
'Minyan' trade route by which silver bullion from the Troad and beyond,
and, with it, the imitative forms of silver vessels, had spread across Central