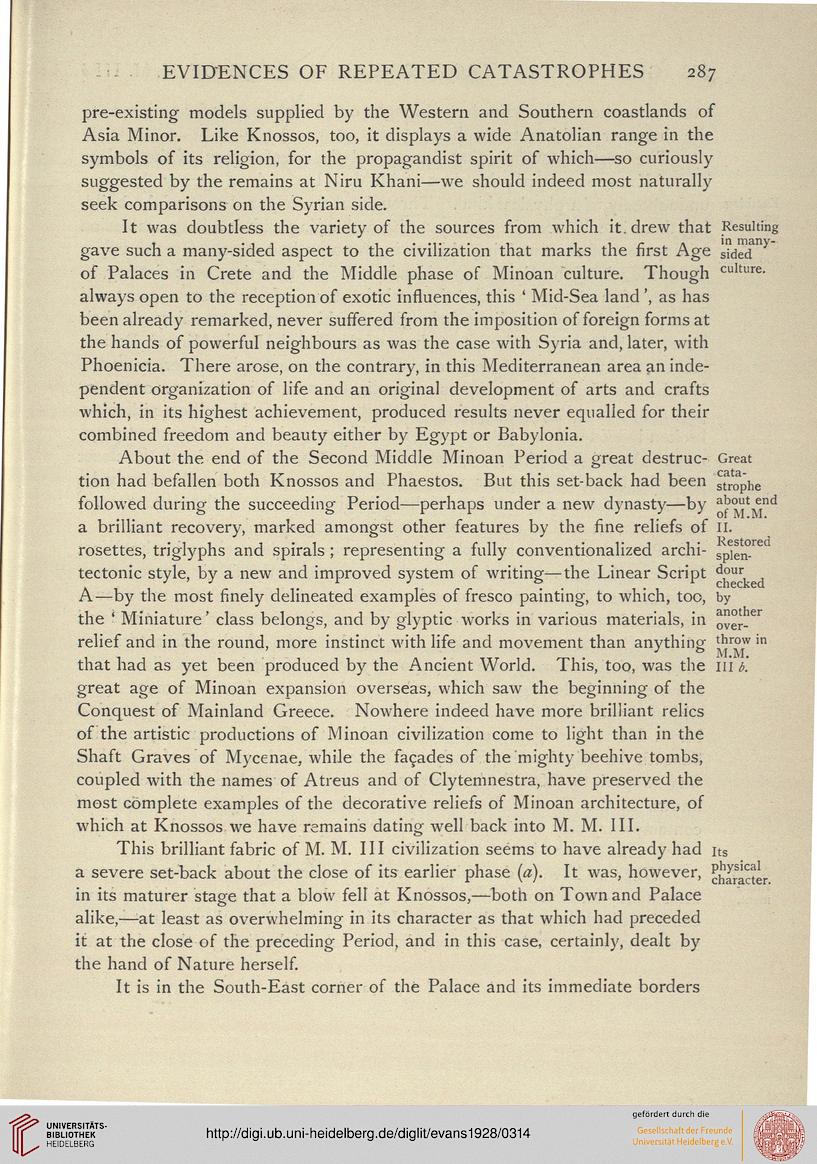 pre-existing models supplied by the Western and Southern coastlands of
Asia Minor. Like Knossos, too, it displays a wide Anatolian range in the
symbols of its religion, for the propagandist spirit of which—so curiously
suggested by the remains at Niru Khani—we should indeed most naturally
seek comparisons on the Syrian side.

It was doubtless the variety of the sources from which it. drew that Resulting
gave such a many-sided aspect to the civilization that marks the first Age sided
of Palaces in Crete and the Middle phase of Minoan culture. Though cuIture-
always open to the reception of exotic influences, this ' Mid-Sea land ', as has
been already remarked, never suffered from the imposition of foreign forms at
the hands of powerful neighbours as was the case with Syria and, later, with
Phoenicia. There arose, on the contrary, in this Mediterranean area an inde-
pendent organization of life and an original development of arts and crafts
which, in its highest achievement, produced results never equalled for their
combined freedom and beauty either by Egypt or Babylonia.

tion had befallen both Knossos and Phaestos. But this set-back had been stroPhe

a brilliant recovery, marked amongst other features by the fine reliefs of II.

tectonic style, by a new and improved system of writing—the Linear Script d°ur

A—by the most finely delineated examples of fresco painting, to which, too, by

the ' Miniature' class belongs, and by glyptic works in various materials, in o"er.er

relief and in the round, more instinct with life and movement than anything; throw in

that had as yet been produced by the Ancient World. This, too, was the in b.

great age of Minoan expansion overseas, which saw the beginning of the

Shaft Graves of Mycenae, while the facades of the mighty beehive tombs,

coupled with the names of Atreus and of Clytemnestra, have preserved the

most complete examples of the decorative reliefs of Minoan architecture, of

which at Knossos we have remains dating well back into M. M. III.

This brilliant fabric of M. M. Ill civilization seems to have already had its
a severe set-back about the close of its earlier phase (a). It was, however, j^Jracter
in its maturer stage that a blow fell at Knossos,—both on Town and Palace
alike,—at least as overwhelming in its character as that which had preceded
it at "the close of the preceding Period, and in this case, certainly, dealt by
the hand of Nature herself.