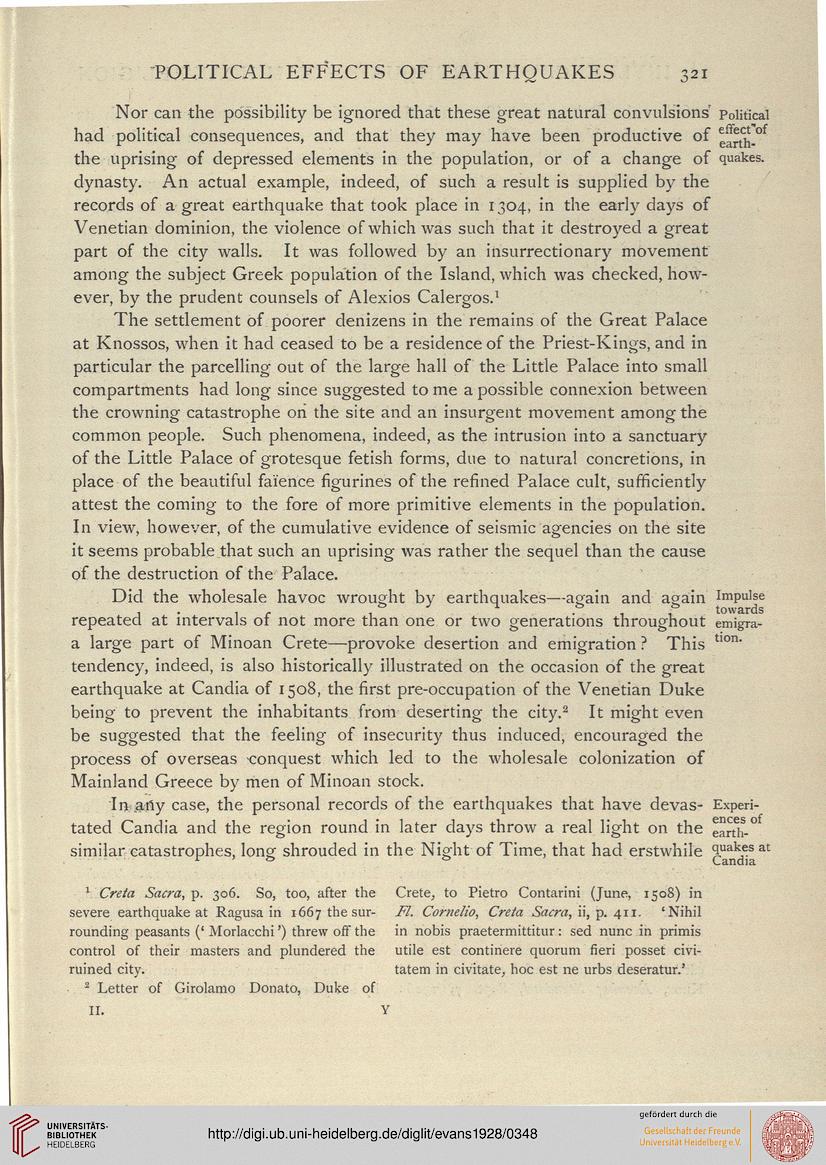 Nor can the possibility be ignored that these great natural convulsions Political
had political consequences, and that they may have been productive of gf^h-°f
the uprising of depressed elements in the population, or of a change of quakes,
dynasty. An actual example, indeed, of such a result is supplied by the
records of a great earthquake that took place in 1304, in the early days of
Venetian dominion, the violence of which was such that it destroyed a great
part of the city walls. It was followed by an insurrectionary movement
among the subject Greek population of the Island, which was checked, how-
ever, by the prudent counsels of Alexios Calergos.1

The settlement of poorer denizens in the remains of the Great Palace
at Knossos, when it had ceased to be a residence of the Priest-Kings, and in
particular the parcelling out of the large hall of the Little Palace into small
compartments had long since suggested to me a possible connexion between
the crowning catastrophe on the site and an insurgent movement among the
common people. Such phenomena, indeed, as the intrusion into a sanctuary
of the Little Palace of grotesque fetish forms, due to natural concretions, in
place of the beautiful faience figurines of the refined Palace cult, sufficiently
attest the coming to the fore of more primitive elements in the population.
In view, however, of the cumulative evidence of seismic agencies on the site
it seems probable that such an uprising was rather the sequel than the cause
of the destruction of the Palace.

Did the wholesale havoc wrought by earthquakes—again and again Impulse

repeated at intervals of not more than one or two generations throughout emigra-
a large part of Minoan Crete—provoke desertion and emigration ? This tlon'
tendency, indeed, is also historically illustrated on the occasion of the great
earthquake at Candia of 1508, the first pre-occupation of the Venetian Duke
being to prevent the inhabitants from deserting the city.2 It might even
be suggested that the feeling of insecurity thus induced, encouraged the
process of overseas -conquest which led to the wholesale colonization of
Mainland Greece by men of Minoan stock.

In any case, the personal records of the earthquakes that have devas- Experi-
tated Candia and the region round in later days throw a real light on the earth-°
similar catastrophes, long shrouded in the Night of Time, that had erstwhile quakes at