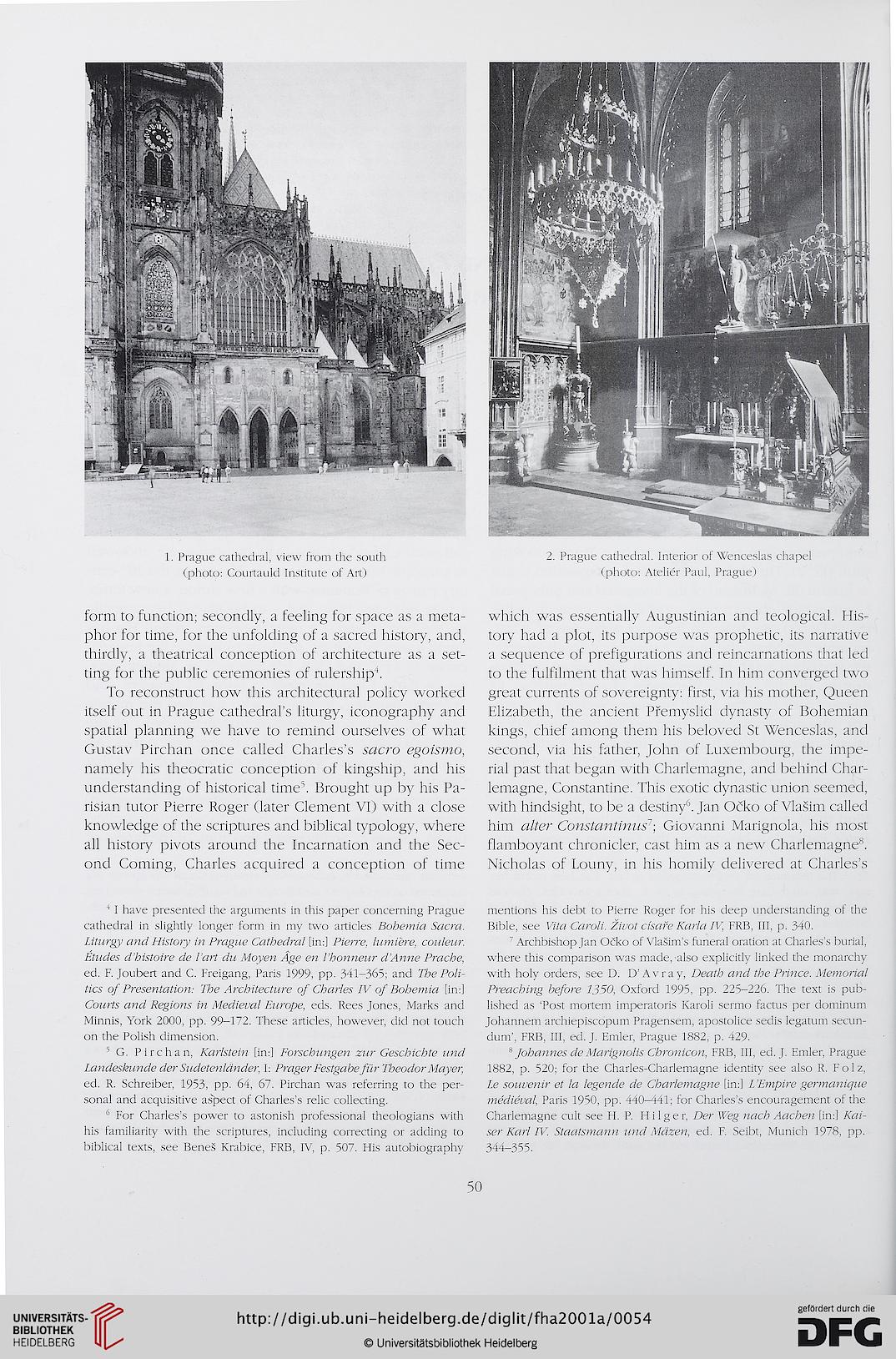 form to function; secondly, a feeling for space as a meta-
phor for time, for the unfolding of a sacred history, and,
thirdly, a theatrical conception of architecture as a set-
ting for the public ceremonies of rulership4.

To reconstruct how this architectural policy worked
itself out in Prague cathedrafs liturgy, iconography and
spatial planning we have to remind ourselves of what
Gustav Pirchan once called Charles’s sacro egoismo,
namely his theocratic conception of kingship, and his
understancling of historical time5. Brought up by his Pa-
risian tutor Pierre Roger (later Clement VI) with a close
knowledge of the scriptures and biblical typology, where
all history pivots around the Incarnation and the Sec-
ond Corning, Charles acąuired a conception of time

4 I have presented the arguments in this paper concerning Prague
cathedral in slightly longer form in my two articles Bobemia Sacra.
Liturgy and History in Prague Cathedral [in:] Pierre, lumiere, couleur.
Etudes d’histoire de IWjrt du Moyen Age en l’honneur dAnne Prache,
ed. F. Joubert and C. Freigang, Paris 1999, pp. 341-365; and The Poli-
tics of Presentation: The Architecture of Charles IV of Bohemia [in:]
Courts and Regions in Medieval Europę, eds. Rees Jones, Marks and
Minnis, York 2000, pp. 99-172. These articles, however, did not touch
on the Polish dimension.

6 For Charles’s power to astonish professional theologians with

his familiarity with the scriptures, including correcting or adding to

which was essentially Augustinian and teological. His-
tory had a plot, its purpose was prophetic, its narrative
a seąuence of prefigurations and reincarnations that leci
to the fulfilment that was himself. In him converged two
great currents of sovereignty; first, via his mother, Queen
Elizabeth, the ancient Premyslid dynasty of Bohemian
kings, chief among them his beloved St Wenceslas, and
second, via his father, John of Luxembourg, the impe-
rial past that began with Charlemagne, and behind Char-
lemagne, Constantine. This exotic dynastie union seemecl,
with hindsight, to be a destiny6 *. Jan Oćko of Vlasim called
him alter Constantimis1; Giovanni Marignola, his most
flamboyant chronider, cast him as a new Charlemagne8.
Nicholas of Louny, in his homily delivered at Charles’s