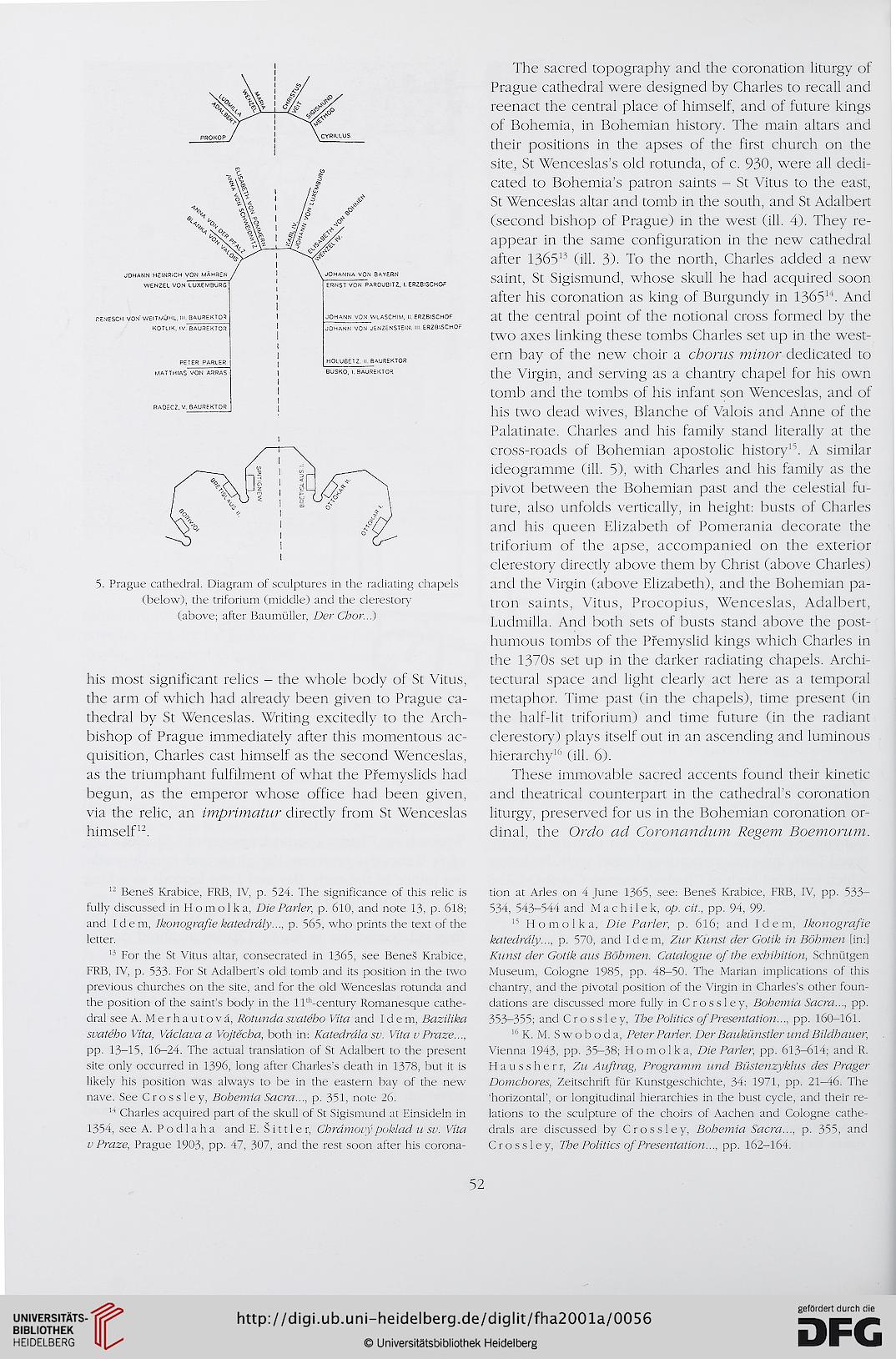 Information about OCR text
5. Prague cathedral. Diagram of sculptures in the radiating chapels
(below), the triforium (middle) and the clerestory
(above; after Baumtiller, Der Chor..?)

his most significant relics - the whole body of St Vitus,
the arm of which had already been given to Prague ca-
thedral by St Wenceslas. Writing excitedly to the Arch-
bishop of Prague immediately after this momentous ac-
ąuisition, Charles cast himself as the second Wenceslas,
as the triumphant fulfilment of what the Pfemyslids had
begun, as the emperor whose office had been given,
via the relic, an imprimatur directly from St Wenceslas
himself12.

13 For the St Vitus altar, consecrated in 1365, see Benes Krabice,
FRB, IV, p. 533- For St Adalberfs old tomb and its position in the two
previous churches on the site, and for the old Wenceslas rotunda and
the position of the saint’s body in the ll^-century Romanesąue cathe-
dral see A. M e r h a u t o v a, Rotunda suateho Vtta and Idem, Bazilika
suateho Vtta, Vaclava a Vojtecha, both in: Katedrala sv. Vtia vPraze...,
pp. 13-15, 16-24. The actual translation of St Adalbert to the present
site only occurred in 1396, long after Charles’s death in 1378, but it is
likely his position was always to be in the eastern bay of the new
nave. See Crossley, Bohemia Sacra..., p. 351, notę 26.

The sacred topography and the coronation liturgy of
Prague cathedral were designed by Charles to recall and
reenact the central place of himself, and of futurę kings
of Bohemia, in Bohemian history. The main altars anci
their positions in the apses of the first church on the
site, St Wenceslas’s old rotunda, of c. 930, were all dedi-
cated to Bohemia’s patron saints - St Vitus to the east,
St Wenceslas altar and tomb in the south, and St Adalbert
(second bishop of Prague) in the west (ill. 4). They re-
appear in the same configuration in the new cathedral
after 136513 (ill. 3)- To the north, Charles added a new
saint, St Sigismund, whose skuli he had acąuired soon
after his coronation as king of Burgundy in 1365l4. And
at the central point of the notional cross formed by the
two axes linking these tombs Charles set up in the west-
ern bay of the new choir a chorus minor dedicated to
the Virgin, and serving as a chantiy chapel for his own
tomb and the tombs of his infant son Wenceslas, and of
his two deacl wives, Blanche of Valois and Annę of the
Palatinate. Charles and his family stand literally at the
cross-roads of Bohemian apostolic history15. A similar
ideogramme (ill. 5), with Charles and his family as the
pivot between the Bohemian past and the celestial fu-
turę, also unfolds vertically, in height: busts of Charles
and his ąueen Elizabeth of Pomerania decorate the
triforium of the apse, accompanied on the exterior
clerestory directly above them by Christ (above Charles)
and the Virgin (above Elizabeth), and the Bohemian pa-
tron saints, Vitus, Procopius, Wenceslas, Adalbert,
Ludmilla. And both sets of busts stand above the post-
humous tombs of the Pfemyslid kings which Charles in
the 1370s set up in the darker radiating chapels. Archi-
tectural space and light clearly act here as a temporal
metaphor. Time past (in the chapels), time present (in
the half-lit triforium) and time futurę (in the radiant
clerestory) plays itself out in an ascending and luminous
hierarchy16 (ill. 6).

These immovable sacred accents found their kinetic
and theatrical counterpart in the cathedraPs coronation
liturgy, preserved for us in the Bohemian coronation or-
dinal, the Ordo ad Coronandum Regem Boemorum.