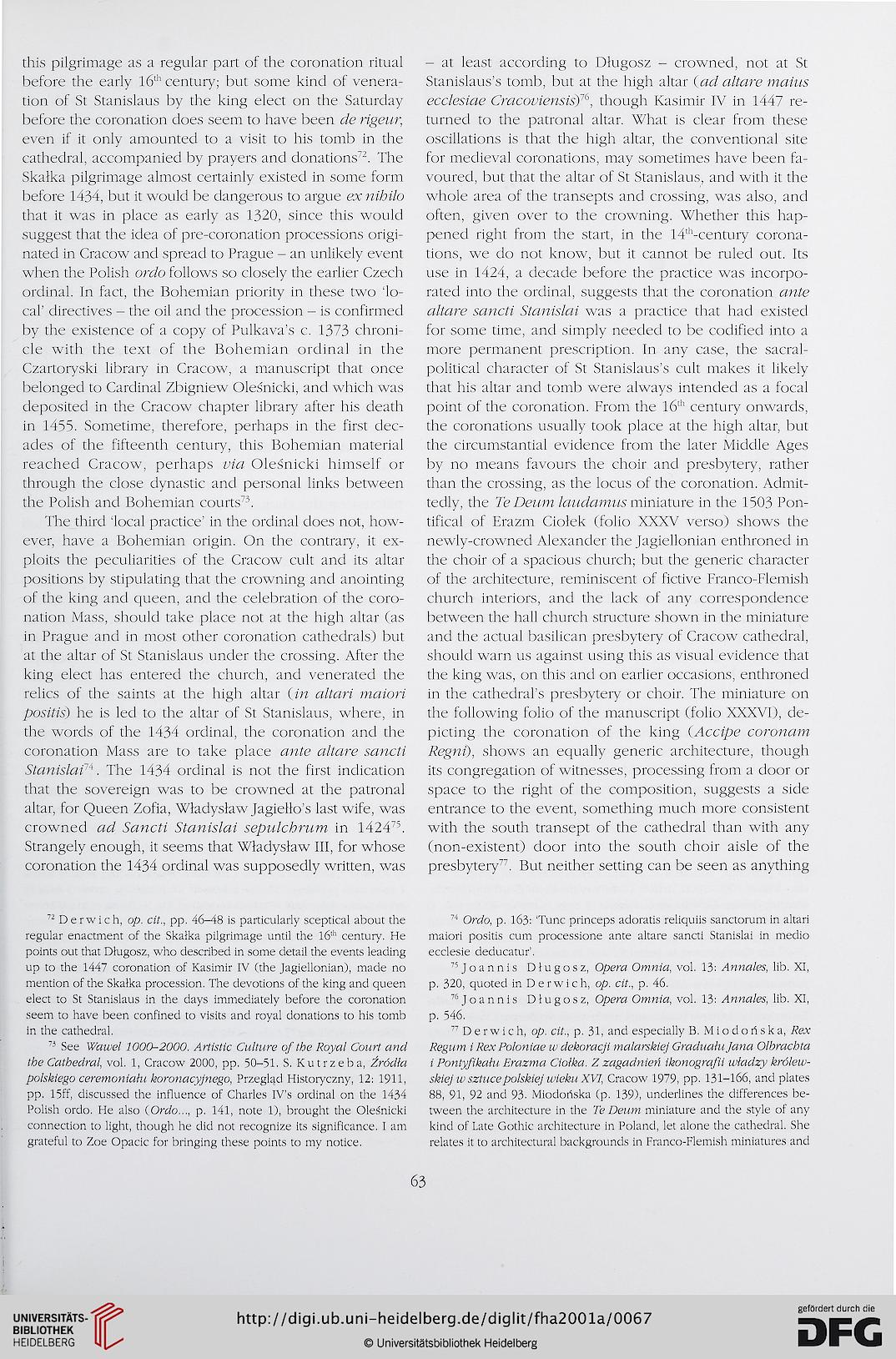 Information about OCR text
this pilgrimage as a regular part of the coronation ritual
before the early l6th century; but some kind of venera-
tion of St Stanislaus by the king elect on the Saturday
before the coronation does seem to have been de rigeur,
even if it only amounted to a visit to his tomb in the
cathedral, accompanied by prayers and donations72. The
Skałka pilgrimage almost certainly existed in some form
before 1434, but it would be dangerous to argue ex nihilo
that it was in place as early as 1320, sińce this would
suggest that the idea of pre-coronation processions origi-
nated in Cracow and spread to Prague - an unlikely event
when the Polish ordo follows so closely the earlier Czech
ordinal. In fact, the Bohemian priority in these two ‘lo-
cal’ directives - the oil and the procession — is confirmed
by the existence of a copy of Pulkava’s c. 1373 chroni-
cie with the text of the Bohemian ordinal in the
Czartoryski library in Cracow, a manuscript that once
belonged to Cardinal Zbigniew Oleśnicki, and which was
deposited in the Cracow chapter library after his death
in 1455. Sometime, therefore, perhaps in the first dec-
ades of the fifteenth century, this Bohemian materiał
reached Cracow, perhaps via Oleśnicki himself or
through the close dynastie and personal links between
the Polish and Bohemian courts73 *.

The third ‘local practice’ in the ordinal does not, how-
ever, have a Bohemian origin. On the contrary, it ex-
ploits the peculiarities of the Cracow cult and its altar
positions by stipulating that the crowning and anointing
of the king and ąueen, and the celebration of the coro-
nation Mass, should take place not at the high altar (as
in Prague and in most other coronation cathedrals) but
at the altar of St Stanislaus under the Crossing. After the
king elect has entered the church, and venerated the
relics of the saints at the high altar (m altan maiori
positis) he is led to the altar of St Stanislaus, where, in
the words of the 1434 ordinal, the coronation and the
coronation Mass are to take place antę altare sancti
Stanislai74. The 1434 ordinal is not the first indication
that the sovereign was to be crowned at the patronal
altar, for Queen Zofia, Władysław Jagiełło’s last wife, was
crowned ad Sancti Stanislai sepulchrum in 142475 *.
Strangely enough, it seems that Władysław III, for whose
coronation the 1434 ordinal was supposedly written, was

72 D e r w i c h, op. cit., pp. 46-48 is particularly sceptical about the
regular enaetment of the Skałka pilgrimage until the l6'h century. He
points out that Długosz, who described in some detail the events leading
up to the 1447 coronation of Kasimir IV (the Jagiellonian), macie no
mention of the Skałka procession. The devotions of the king and ąueen
elect to St Stanislaus in the days immediately before the coronation
seem to have been confined to visits and royal donations to his tomb
in the cathedral.

connection to light, though he did not recognize its significance. I am

grateful to Zoe Opacie for bringing these points to my notice.

- at least according to Długosz - crowned, not at St
Stanislaus’s tomb, but at the high altar (ad altare maius
ecclesiae Cracoviensis)%, though Kasimir IV in 1447 re-
turned to the patronal altar. What is elear from these
oscilłations is that the high altar, the conventional site
for medieval coronations, may sometimes have been fa-
voured, but that the altar of St Stanislaus, and with it the
whole area of the transepts and Crossing, was also, and
often, given over to the crowning. Whether this hap-
penecl right from the start, in the l4th-century corona-
tions, we do not know, but it cannot be ruled out. Its
use in 1424, a decade before the practice was incorpo-
rated into the ordinal, suggests that the coronation antę
altare sancti Stanislai was a practice that had existecl
for some time, and simply needecl to be codified into a
morę permanent prescription. In any case, the sacral-
political character of St Stanislaus’s cult makes it likely
that his altar and tomb were always intended as a focal
point of the coronation. From the l6th century onwards,
the coronations usually took place at the high altar, but
the circumstantial evidence from the later Middle Ages
by no means favours the choir and presbytery, rather
than the Crossing, as the loeus of the coronation. Admit-
teclly, the TeDeum laudamus miniaturę in the 1503 Pon-
tifical of Erazm Ciołek (folio XXXV verso) shows the
newly-crownecl Alexander the Jagiellonian enthroned in
the choir of a spacious church; but the generic character
of the architecture, reminiscent of fictive Franco-Flemish
church interiors, and the lack of any correspondence
between the hall church structure shown in the miniaturę
and the actual basilican presbytery of Cracow cathedral,
should warn us against using this as visual evidence that
the king was, on this and on earlier occasions, enthroned
in the cathedraPs presbyteiy or choir. The miniaturę on
the following folio of the manuscript (folio XXXVI), de-
picting the coronation of the king (Accipe coronam
Regni), shows an eąually generic architecture, though
its congregation of witnesses, processing from a door or
space to the right of the composition, suggests a side
entrance to the event, something much morę consistent
with the south transept of the cathedral than with any
(non-existent) door into the south choir aisle of the
presbytery77. But neither setting can be seen as anything