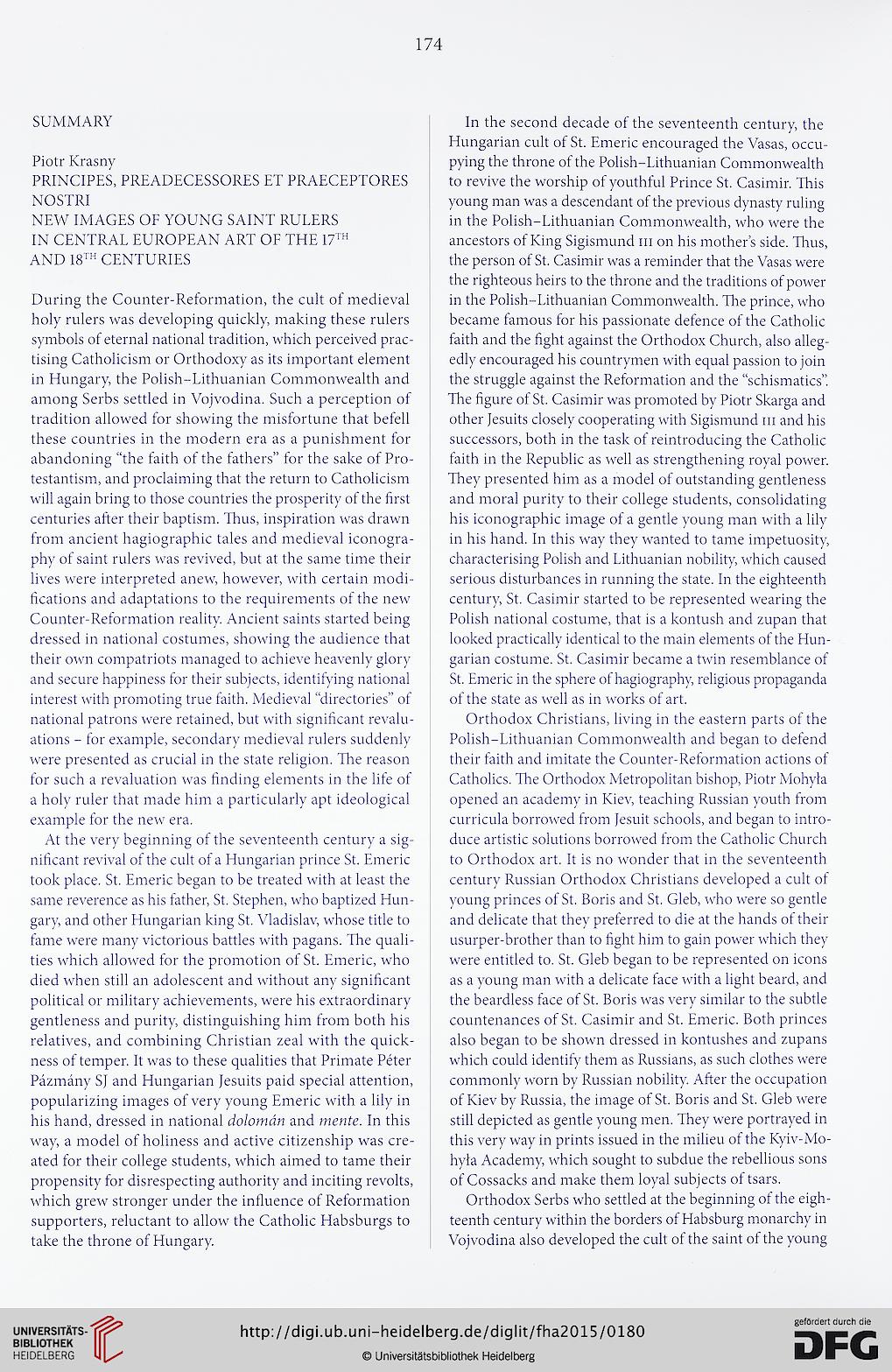 During the Counter-Reformation, the cult of medieval
holy rulers was developing quickly, making these rulers
symbols of eternal national tradition, which perceived prac-
tising Catholicism or Orthodoxy as its important element
in Hungary, the Polish-Lithuanian Commonwealth and
among Serbs settled in Vojvodina. Such a perception of
tradition allowed for showing the misfortune that befell
these countries in the modern era as a punishment for
abandoning “the faith of the fathers” for the sake of Pro-
testantism, and proclaiming that the return to Catholicism
will again bring to those countries the prosperity of the first
centuries after their baptism. Thus, inspiration was drawn
from ancient hagiographic tales and medieval iconogra-
phy of saint rulers was revived, but at the same time their
lives were interpreted anew, however, with certain modi-
fications and adaptations to the requirements of the new
Counter-Reformation reality. Ancient saints started being
dressed in national costumes, showing the audience that
their own compatriots managed to achieve heavenly glory
and secure happiness for their subjects, identifying national
interest with promoting true faith. Medieval “directories” of
national patrons were retained, but with significant revalu-
ations - for example, secondary medieval rulers suddenly
were presented as crucial in the state religion. The reason
for such a revaluation was finding elements in the life of
a holy ruler that made him a particularly apt ideological
example for the new era.

At the very beginning of the seventeenth century a sig-
nificant revival of the cult of a Hungarian prince St. Emeric
took place. St. Emeric began to be treated with at least the
same reverence as his father, St. Stephen, who baptized Hun-
gary, and other Hungarian king St. Vladislav, whose title to
fame were many victorious battles with pagans. The quali-
ties which allowed for the promotion of St. Emeric, who
died when still an adolescent and without any significant
political or military achievements, were his extraordinary
gentleness and purity, distinguishing him from both his
relatives, and combining Christian zeal with the quick-
ness of temper. It was to these qualities that Primate Peter
Pazmany SJ and Hungarian Jesuits paid special attention,
popularizing images of very young Emeric with a lily in
his hand, dressed in national doloman and mente. In this
way, a model of holiness and active citizenship was cre-
ated for their college students, which aimed to tame their
propensity for disrespecting authority and inciting revolts,
which grew stronger under the influence of Reformation
supporters, reluctant to allow the Catholic Habsburgs to
take the throne of Hungary.

In the second decade of the seventeenth century, the
Hungarian cult of St. Emeric encouraged the Vasas, occu-
pying the throne of the Polish-Lithuanian Commonwealth
to revive the worship of youthful Prince St. Casimir. This
young man was a descendant of the previous dynasty ruling
in the Polish-Lithuanian Commonwealth, who were the
ancestors of King Sigismund iii on his mothers side. Thus,
the person of St. Casimir was a reminder that the Vasas were
the righteous heirs to the throne and the traditions of power
in the Polish-Lithuanian Commonwealth. The prince, who
became famous for his passionate defence of the Catholic
faith and the fight against the Orthodox Church, also alleg-
edly encouraged his countrymen with equal passion to join
the struggle against the Reformation and the “schismatics”.
The figure of St. Casimir was promoted by Piotr Skarga and
other Jesuits closely cooperating with Sigismund iii and his
successors, both in the task of reintroducing the Catholic
faith in the Republic as well as strengthening royal power.
They presented him as a model of outstanding gentleness
and moral purity to their college students, consolidating
his iconographic image of a gentle young man with a lily
in his hand. In this way they wanted to tame impetuosity,
characterising Polish and Lithuanian nobility, which caused
serious disturbances in running the state. In the eighteenth
century, St. Casimir started to be represented wearing the
Polish national costume, that is a kontush and zupan that
looked practically identical to the main elements of the Hun-
garian costume. St. Casimir became a twin resemblance of
St. Emeric in the sphere of hagiography, religious propaganda
of the state as well as in works of art.

Orthodox Christians, living in the eastern parts of the
Polish-Lithuanian Commonwealth and began to defend
their faith and imitate the Counter-Reformation actions of
Catholics. The Orthodox Metropolitan bishop, Piotr Mohyła
opened an academy in Kiev, teaching Russian youth from
curricula borrowed from Jesuit schools, and began to intro-
duce artistic solutions borrowed from the Catholic Church
to Orthodox art. It is no wonder that in the seventeenth
century Russian Orthodox Christians developed a cult of
young princes of St. Boris and St. Gleb, who were so gentle
and delicate that they preferred to die at the hands of their
usurper-brother than to fight him to gain power which they
were entitled to. St. Gleb began to be represented on icons
as a young man with a delicate face with a light beard, and
the beardless face of St. Boris was very similar to the subtle
countenances of St. Casimir and St. Emeric. Both princes
also began to be shown dressed in kontushes and zupans
which could identify them as Russians, as such clothes were
commonly worn by Russian nobility. After the occupation
of Kiev by Russia, the image of St. Boris and St. Gleb were
still depicted as gentle young men. They were portrayed in
this very way in prints issued in the milieu of the Kyiv-Mo-
hyła Academy, which sought to subdue the rebellious sons
of Cossacks and make them loyal subjects of tsars.