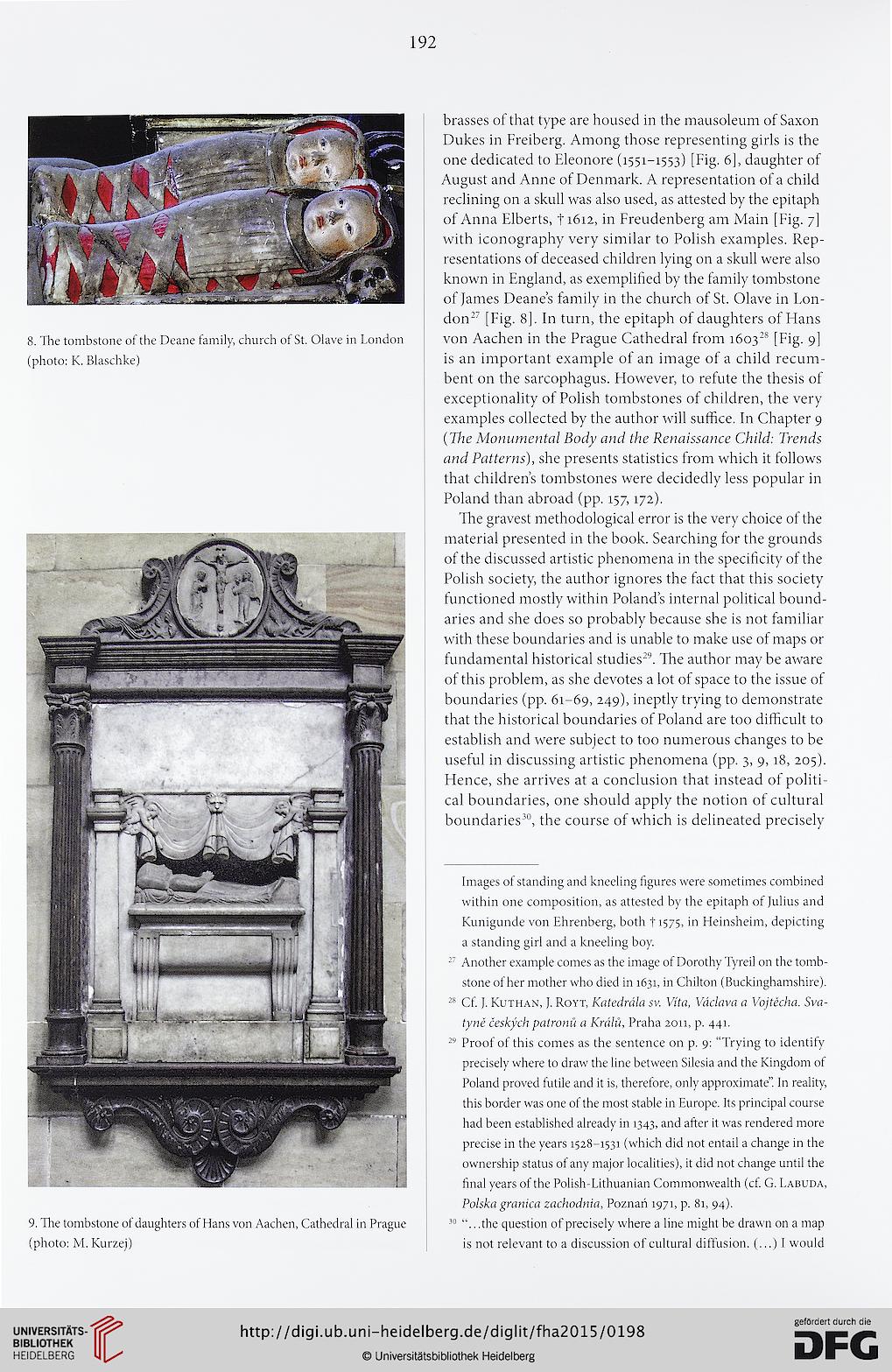 8. The tombstone of the Deane family, church of St. Olave in London
(photo: K. Blaschke)

brasses of that type are housed in the mausoleum of Saxon
Dukes in Freiberg. Among those representing girls is the
one dedicated to Eleonore (1551-1553) [Fig. 6], daughter of
August and Anne of Denmark. A representation of a child
reclining on a skull was also used, as attested by the epitaph
of Anna Elberts, 11612, in Freudenberg am Main [Fig. 7]
with iconography very similar to Polish examples. Rep-
resentations of deceased children lying on a skull were also
known in England, as exemplihed by the family tombstone
of james Deane’s family in the church of St. Olave in Lon-
don 27 [Fig. 8], In turn, the epitaph of daughters of Hans
von Aachen in the Prague Cathedral from 1603 28 [Fig. 9]
is an important example of an image of a child recum-
bent on the sarcophagus. However, to refute the thesis of
exceptionality of Polish tombstones of children, the very
examples collected by the author will suffice. In Chapter 9
(The Monumental Body and the Renaissance Child: Trends
and Patterns), she presents statistics from which it follows
that childrens tombstones were decidedly less popular in
Poland than abroad (pp. 157,172).

The gravest methodological error is the very choice of the
material presented in the book. Searching for the grounds
of the discussed artistic phenomena in the specificity of the
Polish society, the author ignores the fact that this society
functioned mostly within Poland’s internal political bound-
aries and she does so probably because she is not familiar
with these boundaries and is unable to make use of maps or
fundamental historical studies 29. The author may be aware
of this problem, as she devotes a lot of space to the issue of
boundaries (pp. 61-69, 249)> ineptly trying to demonstrate
that the historical boundaries of Poland are too difficult to
establish and were subject to too numerous changes to be
useful in discussing artistic phenomena (pp. 3, 9,18, 205).
Hence, she arrives at a conclusion that instead of politi-
cal boundaries, one should apply the notion of cultural
boundaries 30, the course of which is delineated precisely

Images of standing and kneeling figures were sometimes combined
within one composition, as attested by the epitaph of Julius and
Kunigunde von Ehrenberg, both 11575, in Heinsheim, depicting
a standing girl and a kneeling boy.

27 Another example comes as the image of Dorothy Tyreil on the tomb-
stone of her mother who died in 1631, in Chilton (Buckinghamshire).

29 Proof of this comes as the sentence on p. 9: “Trying to identify
precisely where to draw the line between Silesia and the Kingdom of
Poland proved futile and it is, therefore, only approximate”. In reality,
this border was one of the most stable in Europe. Its principal course
had been established already in 1343, and after it was rendered more
precise in the years 1528-1531 (which did not entail a change in the
ownership status of any major localities), it did not change until the
final years of the Polish-Lithuanian Commonwealth (cf. G. Labuda,
Polska granica zachodnia, Poznah 1971, p. 81, 94).

30 “.. .the question of precisely where a line might be drawn on a map
is not relevant to a discussion of cultural diffusion. (...) I would