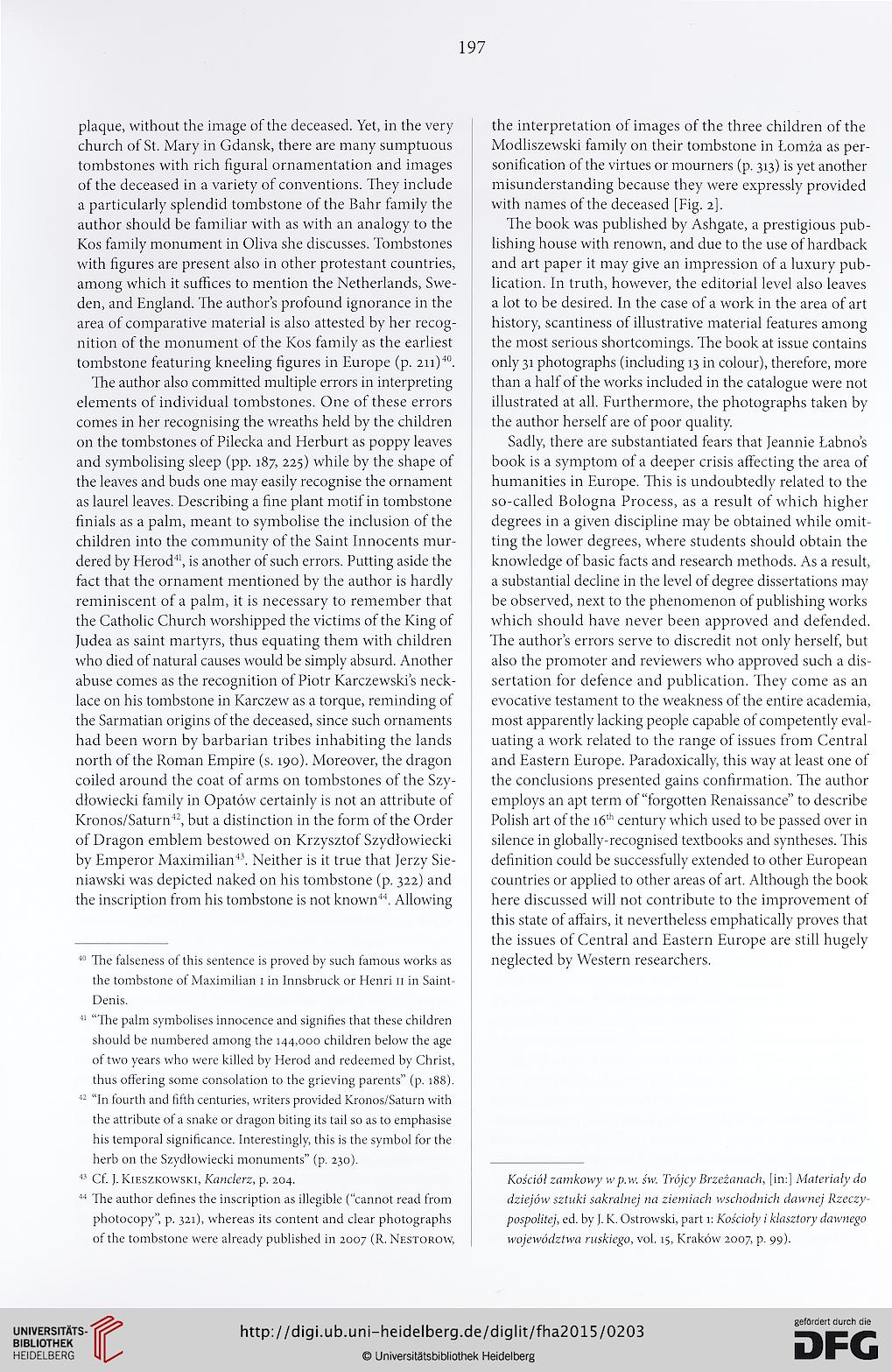 plaque, without the image of the deceased. Yet, in the very
church of St. Mary in Gdansk, there are many sumptuous
tombstones with rich hgural ornamentation and images
of the deceased in a variety of conventions. They include
a particularly splendid tombstone of the Bahr family the
author should be familiar with as with an analogy to the
Kos family monument in Oliva she discusses. Tombstones
with figures are present also in other protestant countries,
among which it suffices to mention the Netherlands, Swe-
den, and England. The author’s profound ignorance in the
area of comparative material is also attested by her recog-
nition of the monument of the Kos family as the earliest
tombstone featuring kneeling figures in Europe (p. 211) 40.

The author also committed multiple errors in interpreting
elements of individual tombstones. One of these errors
comes in her recognising the wreaths held by the children
on the tombstones of Pilecka and Herburt as poppy leaves
and symbolising sleep (pp. 187, 225) while by the shape of
the leaves and buds one may easily recognise the ornament
as laurel leaves. Describing a fine plant motif in tombstone
finials as a palm, meant to symbolise the inclusion of the
children into the community of the Saint Innocents mur-
dered by Herod 41, is another of such errors. Putting aside the
fact that the ornament mentioned by the author is hardly
reminiscent of a palm, it is necessary to remember that
the Catholic Church worshipped the victims of the King of
Judea as saint martyrs, thus equating them with children
who died of natural causes would be simply absurd. Another
abuse comes as the recognition of Piotr Karczewski’s neck-
lace on his tombstone in Karczew as a torque, reminding of
the Sarmatian origins of the deceased, since such ornaments
had been worn by barbarian tribes inhabiting the lands
north of the Roman Empire (s. 190). Moreover, the dragon
coiled around the coat of arms on tombstones of the Szy-
dłowiecki family in Opatów certainly is not an attribute of
Kronos/Saturn 42, but a distinction in the form of the Order
of Dragon emblem bestowed on Krzysztof Szydłowiecki
by Emperor Maximilian 43. Neither is it true that Jerzy Sie-
niawski was depicted naked on his tombstone (p. 322) and
the inscription from his tombstone is not known 44. Allowing

40 The falseness of this sentence is proved by such famous works as
the tombstone of Maximilian 1 in Innsbruck or Henri 11 in Saint-
Denis.

41 “The palm symbolises innocence and signifies that these children
should be numbered among the 144,000 children below the age
of two years who were killed by Herod and redeemed by Christ,
thus offering some consolation to the grieving parents” (p. 188).

42 “In fourth and fifth centuries, writers provided Kronos/Saturn with
the attribute of a snake or dragon biting its tail so as to emphasise
his temporal significance. Interestingly, this is the symbol for the
herb on the Szydłowiecki monuments” (p. 230).

44 Tbe author defines the inscription as illegible (“cannot read from
photocopy”, p. 321), whereas its content and clear photographs
of the tombstone were already published in 2007 (R. Nestorow,

the interpretation of images of the three children of the
Modliszewski family on their tombstone in Łomża as per-
sonification of the virtues or mourners (p. 313) is yet another
misunderstanding because they were expressly provided
with names of the deceased [Fig. 2].

The book was published by Ashgate, a prestigious pub-
lishing house with renown, and due to the use of hardback
and art paper it may give an impression of a luxury pub-
lication. In truth, however, the editorial level also leaves
a lot to be desired. In the case of a work in the area of art
history, scantiness of illustrative material features among
the most serious shortcomings. The book at issue contains
only 31 photographs (including 13 in colour), therefore, more
than a half of the works included in the catalogue were not
illustrated at all. Furthermore, the photographs taken by
the author herself are of poor quality.

Sadly, there are substantiated fears that Jeannie Labno’s
book is a symptom of a deeper crisis affecting the area of
humanities in Europe. This is undoubtedly related to the
so-called Bologna Process, as a result of which higher
degrees in a given discipline may be obtained while omit-
ting the lower degrees, where students should obtain the
knowledge of basic facts and research methods. As a result,
a substantial decline in the level of degree dissertations may
be observed, next to the phenomenon of publishing works
which should have never been approved and defended.
The author’s errors serve to discredit not only herself, but
also the promoter and reviewers who approved such a dis-
sertation for defence and publication. They come as an
evocative testament to the weakness of the entire academia,
most apparently lacking people capable of competently eval-
uating a work related to the range of issues from Central
and Eastern Europe. Paradoxically, this way at least one of
the conclusions presented gains confirmation. The author
employs an apt term of “forgotten Renaissance” to describe
Polish art of the 16 th century which used to be passed over in
silence in globally-recognised textbooks and syntheses. This
definition could be successfully extended to other European
countries or applied to other areas of art. Although the book
here discussed will not contribute to the improvement of
this state of affairs, it nevertheless emphatically proves that
the issues of Central and Eastern Europe are still hugely
neglected by Western researchers.