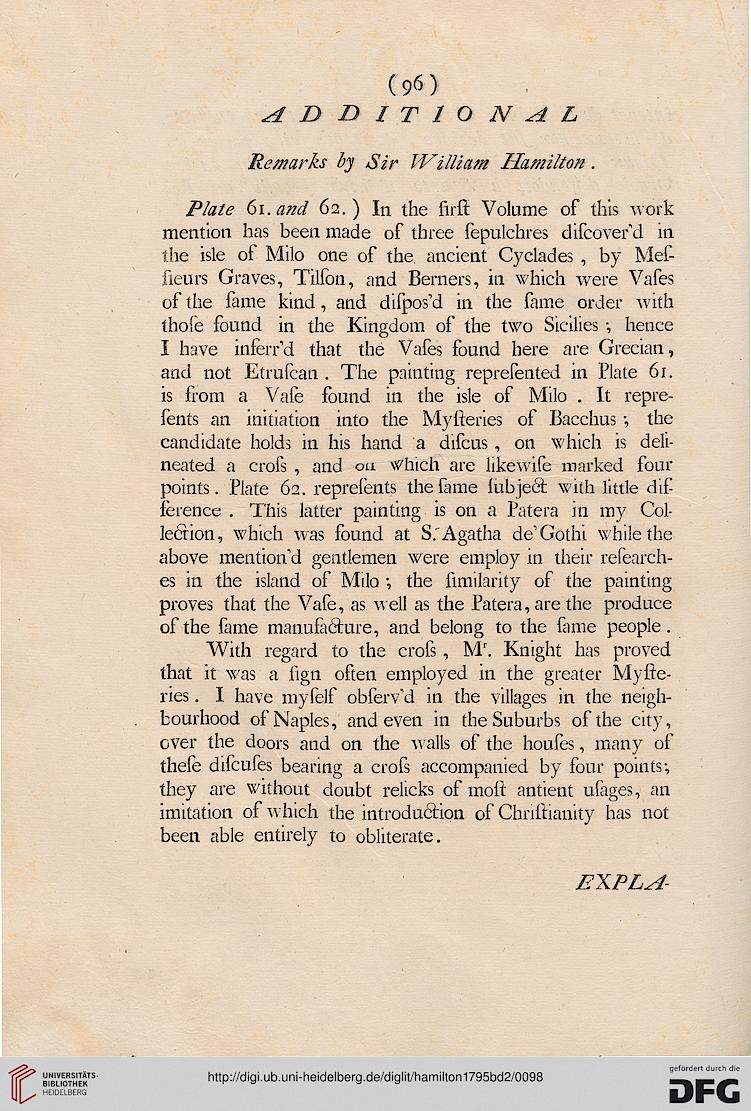 Remarks by Sir William Hamilton.
Plate 6i.and 62.) In the firsi: Volume of this work
mention has been made of three sepulchres discover d in
the isle of Milo one of the ancient Cyclades , by Mes-
sieurs Graves, Tilson, and Berners, in which were Vases
of the same kind, and dispos'd in the same order with
those found in the Kingdom of the two Sicilies hence
I have inferred that the Vases found here are Grecian,
aad not Etruscan . The painting represented in Plate 61.
is from a Vase found in the isle of Milo . It repre-
sents an initiation into the Mysteries of Bacchus *, the
candidate holds in his hand a discus, on which is deli-
neated a cross , and ou which are likewise marked four
joints. Plate 62. represents the same lubjecft with little dif
:erence . This latter painting is on a Patera in my Col-
lection, which was found at S. Agatha de'Gothi while the
above mention d gentlemen were employ in their research-
es in the island of Milo \ the similarity of the painting
proves that the Vase, as well as the Patera, are the produce
of the same manufacture, and belong to the same people.
"With regard to the cross, Mr. Knight has proved
that it was a sign often employed in the greater My Ae-
ries . I have myself observ'd in the villages in the neigh-
bourhood of Naples, and even in the Suburbs of the city,
over the doors and on the walls of the houses, many of
thefe discuses bearing a cross accompanied by four points;
they are without doubt relicks of molt antient usages, an
imitation of which the introduction of Christianity has not
been able entirely to obliterate.
EXP LA