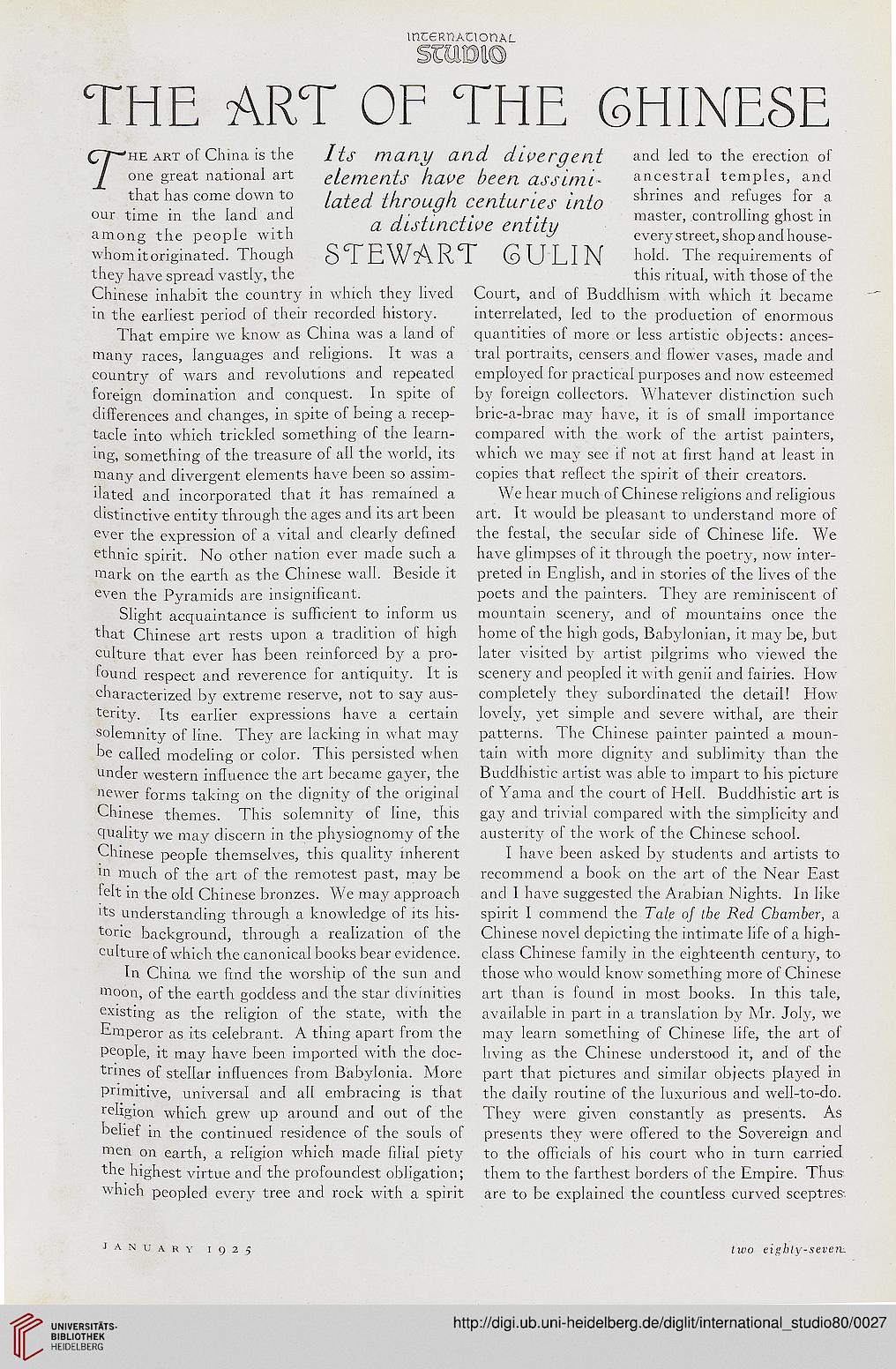 THE ART OF THE 6HINESE

one great national art elements have been aSSimi- ancestral temples, and

among the people with & every street, shop and house-
whom it originated. Though STEWART 6ULIN" The requirements of
they have spread vastly, the this ritual, with those of the
Chinese inhabit the country in which they lived Court, and of Buddhism with which it became
in the earliest period of their recorded history. interrelated, led to the production of enormous
That empire we know as China was a land of quantities of more or less artistic objects: ances-
many races, languages and religions. It was a tral portraits, censers and flower vases, made and
country of wars and revolutions and repeated employed for practical purposes and now esteemed
foreign domination and conquest. In spite of by foreign collectors. Whatever distinction such
differences and changes, in spite of being a recep- bric-a-brac may have, it is of small importance
tacle into which trickled something of the learn- compared with the work of the artist painters,
ing, something of the treasure of all the world, its which we may see if not at first hand at least in
many and divergent elements have been so assim- copies that reflect the spirit of their creators,
ilated and incorporated that it has remained a We hear much of Chinese religions and religious
distinctive entity through the ages and its art been art. It would be pleasant to understand more of
ever the expression of a vital and clearly defined the festal, the secular side of Chinese life. We
ethnic spirit. No other nation ever made such a have glimpses of it through the poetry, now inter-
mark on the earth as the Chinese wall. Beside it preted in English, and in stories of the lives of the
even the Pyramids are insignificant. poets and the painters. They are reminiscent of
Slight acquaintance is sufficient to inform us mountain scenery, and of mountains once the
that Chinese art rests upon a tradition of high home of the high gods, Babylonian, it may be, but
culture that ever has been reinforced by a pro- later visited by artist pilgrims who viewed the
found respect and reverence for antiquity. It is scenery and peopled it with genii and fairies. How
characterized by extreme reserve, not to say aus- completely they subordinated the detail! How
terity. Its earlier expressions have a certain lovely, yet simple and severe withal, are their
solemnity of line. They are lacking in what may patterns. The Chinese painter painted a moun-
be called modeling or color. This persisted when tain with more dignity and sublimityr than the
under western influence the art became gayer, the Buddhistic artist was able to impart to his picture
newer forms taking on the dignity of the original of Yama and the court of Hell. Buddhistic art is
Chinese themes. This solemnity of line, this gay and trivial compared with the simplicity and
quality we may discern in the physiognomy of the austerity of the work of the Chinese school.
Chinese people themselves, this quality inherent I have been asked by students and artists to
in much of the art of the remotest past, may be recommend a book on the art of the Near East
felt in the old Chinese bronzes. We may approach and I have suggested the Arabian Nights. In like
its understanding through a knowledge of its his- spirit I commend the Tale of the Red Chamber, a
toric background, through a realization of the Chinese novel depicting the intimate life of a high-
culture of which the canonical books bear evidence, class Chinese family in the eighteenth century, to
In China we find the worship of the sun and those who would know something more of Chinese
moon, of the earth goddess and the star divinities art than is found in most books. In this tale,
existing as the religion of the state, with the available in part in a translation by Mr. Joly, we
Emperor as its celebrant. A thing apart from the may learn something of Chinese life, the art of
people, it may have been imported with the doc- living as the Chinese understood it, and of the
tnnes of stellar influences from Babylonia. More part that pictures and similar objects played in
primitive, universal and all embracing is that the daily routine of the luxurious and well-to-do.
religion which grew up around and out of the They were given constantly as presents. As
belief in the continued residence of the souls of presents they were offered to the Sovereign and
men on earth, a religion which made filial piety to the officials of his court who in turn carried
the highest virtue and the profoundest obligation; them to the farthest borders of the Empire. Thus
which peopled every tree and rock with a spirit are to be explained the countless curved sceptres-.