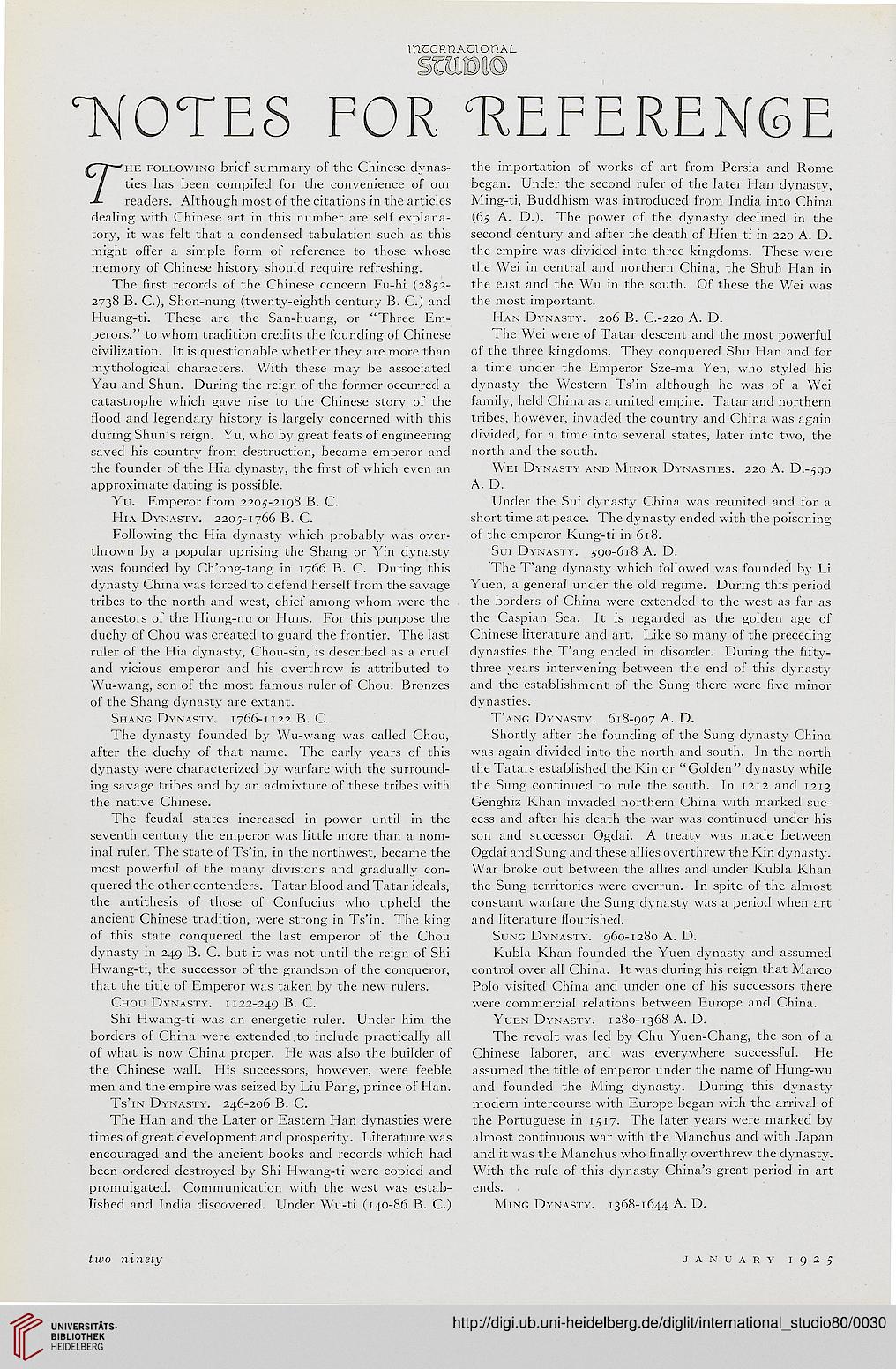 rhe following brief summary of the Chinese dynas-
ties has been compiled for the convenience of our
readers. Although most of the citations in the articles
dealing with Chinese art in this number are self explana-
tory, it was felt that a condensed tabulation such as this
might offer a simple form of reference to those whose
memory of Chinese history should require refreshing.

The first records of the Chinese concern Fu-hi (2852-
2738 B. C), Shon-nung (twenty-eighth century B. C.) and
Huang-ti. These are the San-huang, or "Three Em-
perors," to whom tradition credits the founding of Chinese
civilization. It is questionable whether they are more than
mythological characters. With these may be associated
Yau and Shun. During the reign of the former occurred a
catastrophe which gave rise to the Chinese story of the
flood and legendary history is largely concerned with this
during Slum's reign. Yu, who by great feats of engineering
saved his country from destruction, became emperor and
the founder of the Hia dynasty, the first of which even an
approximate dating is possible.

Following the Hia dynasty which probably was over-
thrown by a popular uprising the Shang or Yin dynasty
was founded by Ch'ong-tang in 1766 B. C. During this
dynasty China was forced to defend herself from the savage
tribes to the north and west, chief among whom were the
ancestors of the Hiung-nu or Huns. For this purpose the
duchy of Chou was created to guard the frontier. The last
ruler of the Hia dynasty, Chou-sin, is described as a cruel
and vicious emperor and his overthrow is attributed to
Wu-wang, son of the most famous ruler of Chou. Bronzes
of the Shang dynasty are extant.

The dynasty founded by Wu-wang was called Chou,
after the duchy of that name. The early years of this
dynasty were characterized by warfare with the surround-
ing savage tribes and by an admixture of these tribes with
the native Chinese.

The feudal states increased in power until in the
seventh century the emperor was little more than a nom-
inal ruler. The state of Ts'in, in the northwest, became the
most powerful of the many divisions and gradually con-
quered the other contenders. Tatar blood and Tatar ideals,
the antithesis of those of Confucius who upheld the
ancient Chinese tradition, were strong in Ts'in. The king
of this state conquered the last emperor of the Chou
dynasty in 249 B. C. but it was not until the reign of Shi
Hwang-ti, the successor of the grandson of the conqueror,
that the title ol Emperor was taken by the new rulers.

Shi Hwang-ti was an energetic ruler. Under him the
borders of China were extended.to include practically all
of what is now China proper. He was also the builder of
the Chinese wall. His successors, however, were feeble
men and the empire was seized by Liu Pang, prince of Han.

The Han and the Later or Eastern Han dynasties were
times of great development and prosperity. Literature was
encouraged and the ancient books and records which had
been ordered destroyed by Shi Hwang-ti were copied and
promulgated. Communication with the west was estab-
lished and India discovered. Under Wu-ti (140-86 B. C.)

the importation of works of art from Persia and Rome
began. Under the second ruler of the later Han dynasty,
Ming-ti, Buddhism was introduced from India into China
(65 A. D.). The power of the dynasty declined in the
second century and after the death of Hien-ti in 220 A. D.
the empire was divided into three kingdoms. These were
the Wei in central and northern China, the Shuh Han in
the east and the Wu in the south. Of these the Wei was
the most important.

The Wei were of Tatar descent and the most powerful
of the three kingdoms. They conquered Shu Han and for
a time under the Emperor Sze-ma Yen, who styled his
dynasty the Western Ts'in although he was of a Wei
family, held China as a united empire. Tatar and northern
tribes, however, invaded the country and China was again
divided, for a time into several states, later into two, the
north and the south.

Under the Sui dynasty China was reunited and for a
short time at peace. The dynasty ended with the poisoning
of the emperor Kung-ti in 618.

The T'ang dynasty which followed was founded by Li
Yuen, a general under the old regime. During this period
the borders of China were extended to the west as far as
the Caspian Sea. It is regarded as the golden age of
Chinese literature and art. Like so many of the preceding
dynasties the T'ang ended in disorder. During the fifty-
three years intervening between the end of this dynasty
and the establishment of the Sung there were five minor
dynasties.

Shortly after the founding of the Sung dynasty China
was again divided into the north and south. In the north
the Tatars established the Kin or "Golden" dynasty while
the Sung continued to rule the south. In 1212 and 1213
Genghiz Khan invaded northern China with marked suc-
cess and after his death the war was continued under his
son and successor Ogdai. A treaty was made between
Ogdai and Sung and these allies overthrew the Kin dynasty.
War broke out between the allies and under Kubla Khan
the Sung territories were overrun. In spite of the almost
constant warfare the Sung dynasty was a period when art
and literature flourished.

Kubla Khan founded the Yuen dynasty and assumed
control over all China. It was during his reign that Marco
Polo visited China and under one of his successors there
were commercial relations between Europe and China.

The revolt was led by Chu Yuen-Chang, the son of a
Chinese laborer, and was everywhere successful. He
assumed the title of emperor under the name of Hung-wu
and founded the Ming dynasty. During this dynasty
modern intercourse with Europe began with the arrival of
the Portuguese in 1517. The later years were marked by
almost continuous war with the Manchus and with Japan
and it was the Manchus who finally overthrew the dynasty.
With the rule of this dynasty China's great period in art
ends. .