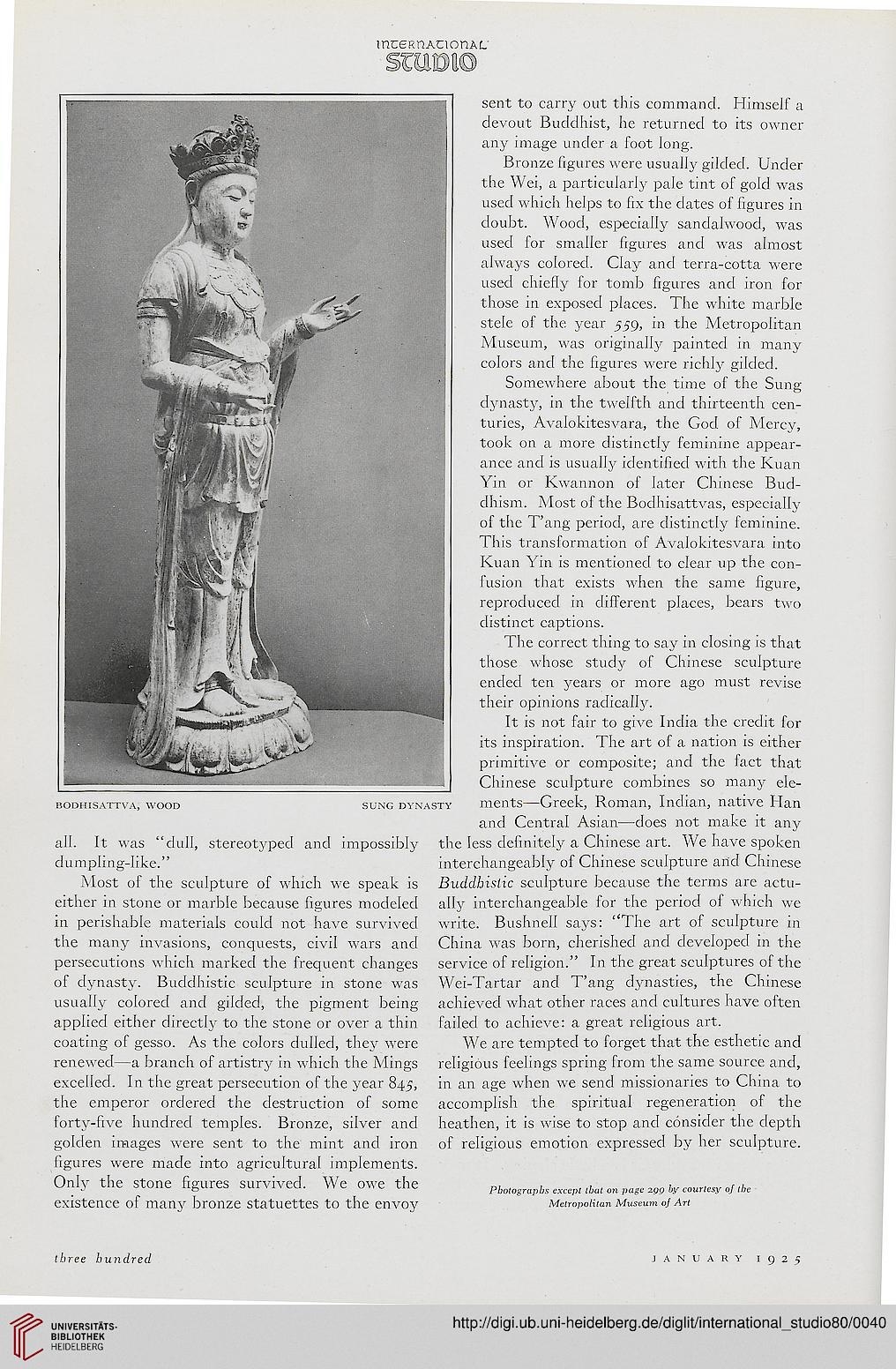 sent to carry out this command. Himself a
devout Buddhist, he returned to its owner
any image under a foot long.

Bronze figures were usually gilded. Under
the Wei, a particularly pale tint of gold was
used which helps to fix the dates of figures in
doubt. Wood, especially sandalwood, was
used for smaller figures and was almost
always colored. Clay and terra-cotta were
used chiefly for tomb figures and iron for
those in exposed places. The white marble
stele of the year 559, in the Metropolitan
Museum, was originally painted in many
colors and the figures were richly gilded.

Somewhere about the time of the Sung
dynasty, in the twelfth and thirteenth cen-
turies, Avalokitesvara, the God of Mercy,
took on a more distinctly feminine appear-
ance and is usually identified with the Kuan
Yin or Kwannon of later Chinese Bud-
dhism. Most of the Bodhisattvas, especially
of the T'ang period, are distinctly feminine.
This transformation of Avalokitesvara into
Kuan Yin is mentioned to clear up the con-
fusion that exists when the same figure,
reproduced in different places, bears two
distinct captions.

The correct thing to say in closing is that
those whose study of Chinese sculpture
ended ten years or more ago must revise
their opinions radically.

It is not fair to give India the credit for
its inspiration. The art of a nation is cither
primitive or composite; and the fact that
Chinese sculpture combines so many ele-
bodhisattva, wood sung dynasty ments—Greek, Roman, Indian, native Han

and Central Asian—does not make it any
all. It was "dull, stereotyped and impossibly the less definitely a Chinese art. We have spoken
dumpling-like." interchangeably of Chinese sculpture arid Chinese

Most of the sculpture of which we speak is Buddhistic sculpture because the terms are actu-
either in stone or marble because figures modeled ally interchangeable for the period of which we
in perishable materials could not have survived write. Bushnell says: "The art of sculpture in
the many invasions, conquests, civil wars and China was born, cherished and developed in the
persecutions which marked the frequent changes service of religion." In the great sculptures of the
of dynasty. Buddhistic sculpture in stone was Wei-Tartar and T'ang dynasties, the Chinese
usually colored and gilded, the pigment being achieved what other races and cultures have often
applied either directly to the stone or over a thin failed to achieve: a great religious art.
coating of gesso. As the colors dulled, they were We are tempted to forget that the esthetic and
renewed—a branch of artistry in which the ATngs religious feelings spring from the same source and,
excelled. In the great persecution of the year 845, in an age when we send missionaries to China to
the emperor ordered the destruction of some accomplish the spiritual regeneration of the
forty-five hundred temples. Bronze, silver and heathen, it is wise to stop and consider the depth
golden images were sent to the mint and iron of religious emotion expressed by her sculpture,
figures were made into agricultural implements.

J ° Photographs except that on page 299 oy courtesy oj the