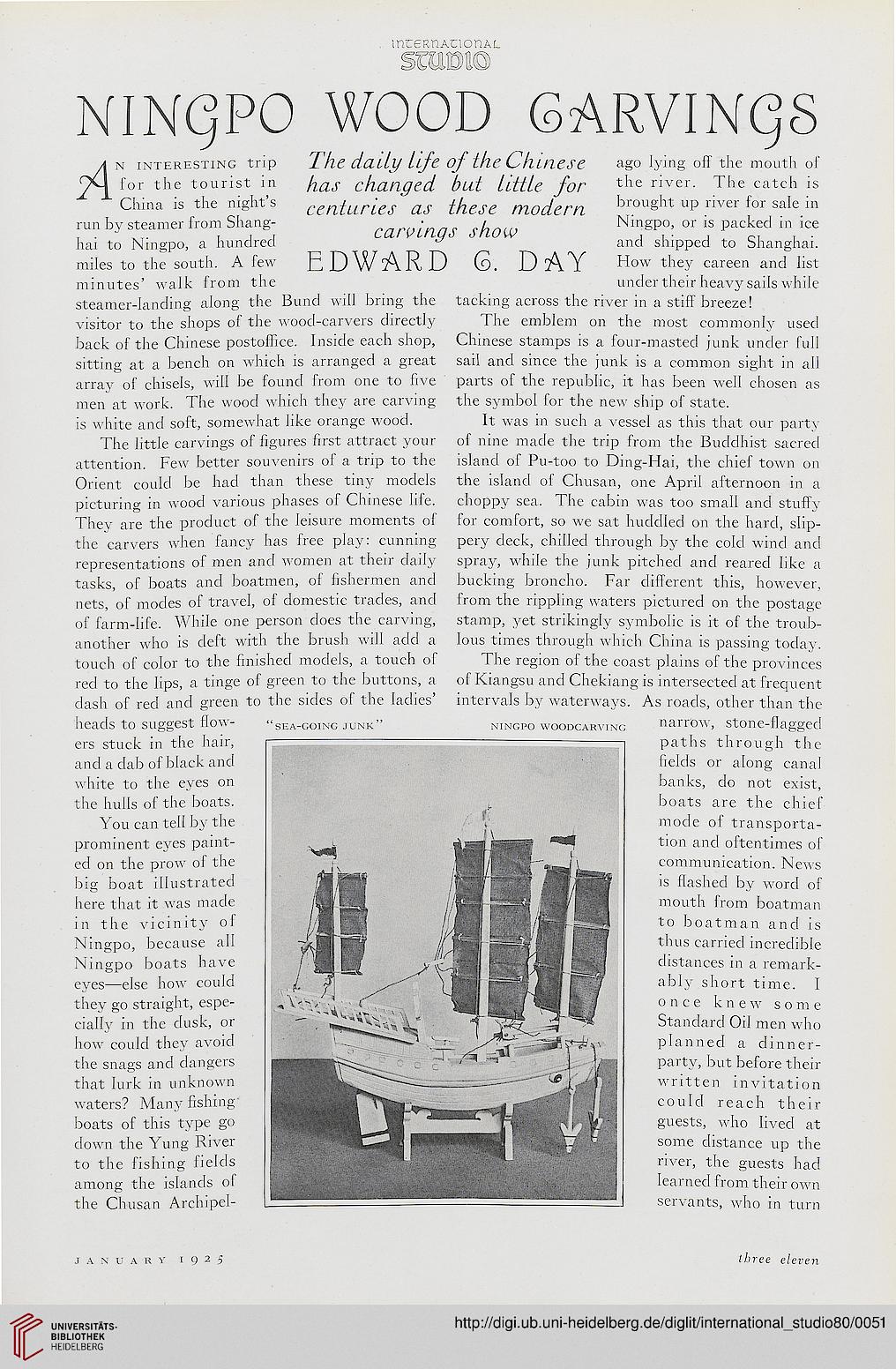 A n interesting trip 2^he da ill/ life of the Chinese ago lying off' the mouth of
2^ for the tourist in nas changed but little for the river. The catch is

China is the night's centuries as these modern brousnt UP river lor s^le !l1

run by steamer from Shang- carvinQS show NmgP°. or 1S packed in ice

hai to Ningpo, a hundred " and shipped to Shanghai,

miles to the south. A few EDWARD 6. DAY How they careen and list

minutes' walk from the under their heavy sails while

steamer-landing along the Bund will bring the tacking across the river in a stiff breeze!

back of the Chinese postoffice. Inside each shop, Chinese stamps is a four-masted junk under full

array of chisels, will be found from one to live parts of the republic, it has been well chosen as

men at work. The wood which they are carving the symbol for the new ship of state,

is white and soft, somewhat like orange wood. It was in such a vessel as this that our party

attention. Few better souvenirs of a trip to the island of Pu-too to Ding-Hai, the chief town on

Orient could be had than these tiny models the island of Chusan, one April afternoon in a

picturing in wood various phases of Chinese life. choppy sea. The cabin was too small and stuffy

They are the product of the leisure moments of for comfort, so we sat huddled on the hard, slip-

tlie carvers when fancy has free play: cunning pery deck, chilled through by the cold wind and

representations of men and women at their daily spray, while the junk pitched and reared like a

tasks, of boats and boatmen, of fishermen and bucking broncho. Far different this, however,

nets, of modes of travel, of domestic trades, and from the rippling waters pictured on the postage

of farm-life. While one person does the carving, stamp, yet strikingly symbolic is it of the troub-

another who is cleft with the brush will add a lous times through which China is passing today,

touch of color to the finished models, a touch of The region of the coast plains of the provinces

red to the lips, a tinge of green to the buttons, a of Kiangsu and Chekiangis intersected at frequent

dash of red and green to the sides of the ladies' intervals by waterways. As roads, other than the

ers stuck in the hair,
and a dab of black and
white to the eyes on
the hulls of the boats.

You can tell by the
prominent eyes paint-
ed on the prow of the
big boat illustrated
here that it was made
in the vicinity of
Ningpo, because all
Ningpo boats have
eyes—else how could
they go straight, espe-
cially in the dusk, or
how could they avoid
the snags and dangers
tiiat lurk in unknown
waters? Many fishing
boats of this type go
down the Yung River
to the fishing fields
among the islands of
the Chusan Archipel-

paths through the
fields or along canal
banks, do not exist,
boats arc the chief
mode of transporta-
tion and oftentimes of
communication. News
is flashed by word ol
mouth from boatman
to boatman and is
thus carried incredible
distances in a remark-
ably short time. I
once knew some
Standard Oil men who
planned a dinner-
party, but before their
written invitation
could reach their
guests, who lived at
some distance up the
river, the guests had
learned from their own
servants, who in turn