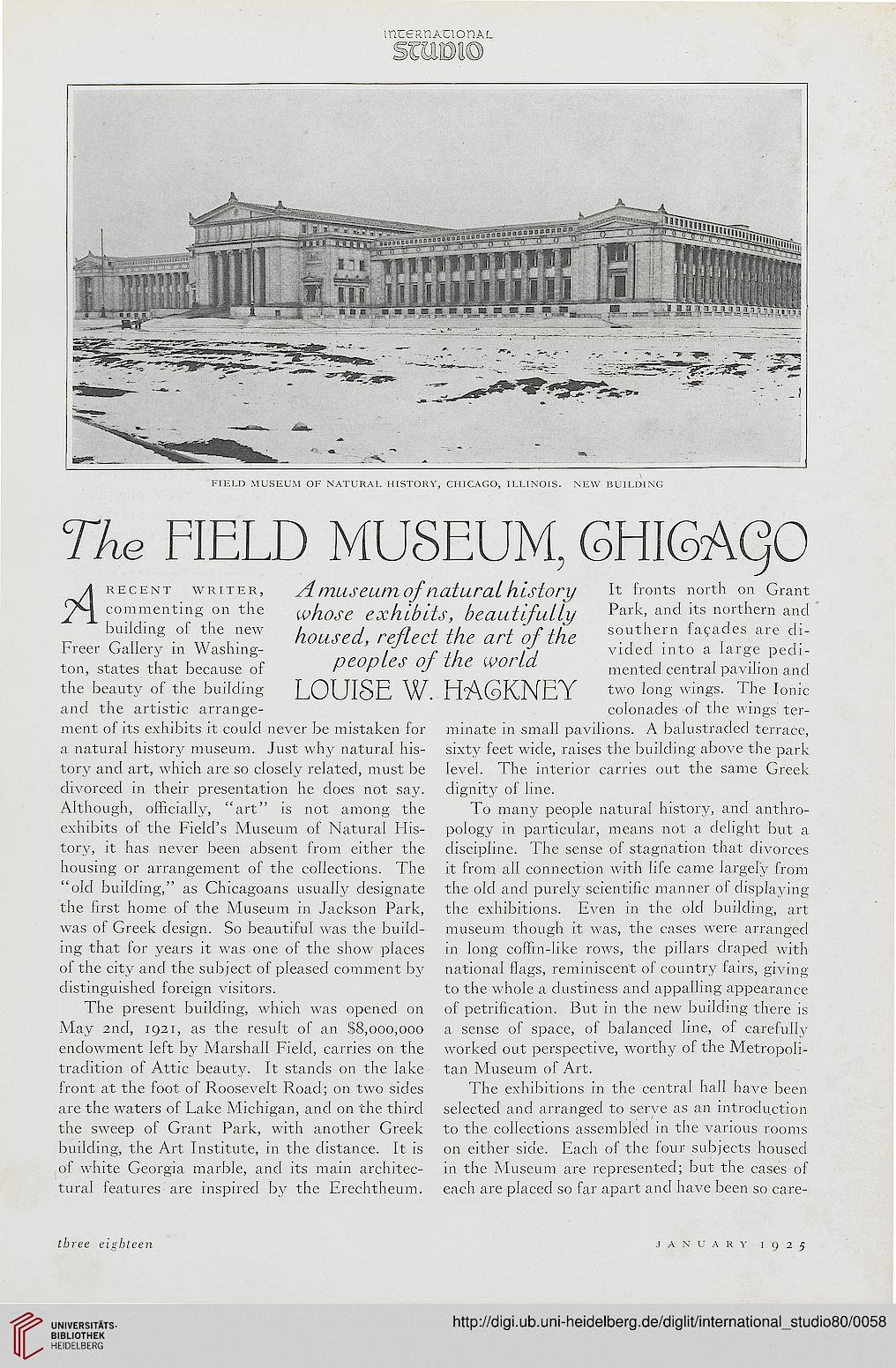 >1 recent writer, A museum ofnatural history It fronts north on Grant
2<\ commenting on the whose exhibits, beautifully Park> and its northem and
building of the new housed reflect fhe arf Qf the southern facades are di-

ton, states that because of peoples Of the World merited central pavilion and

the beauty of the building LOUISE W. HAGKlNfEY two 'onS wings- The Ionic

and the artistic arrange- colonades of the wings ter-

ment of its exhibits it could never be mistaken for minate in small pavilions. A balustraded terrace,

a natural history museum. Just why natural his- sixty feet wide, raises the building above the park

tory and art, which are so closely related, must be level. The interior carries out the same Greek

divorced in their presentation he does not say. dignity of line.

Although, officially, "art" is not among the To many people natural history, and anthro-

exhibits of the Field's Museum of Natural His- pology in particular, means not a delight but a

tory, it has never been absent from either the discipline. The sense of stagnation that divorces

housing or arrangement of the collections. The it from all connection with life came largely from

the first home of the Museum in Jackson Park, the exhibitions. Even in the old building, art

was of Greek design. So beautiful was the build- museum though it was, the cases were arranged

ing that for years it was one of the show places in long coffin-like rows, the pillars draped with

of the city and the subject of pleased comment by national flags, reminiscent of country fairs, giving

distinguished foreign visitors. to the whole a dustiness and appalling appearance

The present building, which was opened on of petrification. But in the new building there is

endowment left by Marshall Field, carries on the worked out perspective, worthy of the Metropoli-

tradition of Attic beauty. It stands on the lake tan Museum of Art.

front at the foot of Roosevelt Road; on two sides The exhibitions in the central hall have been

are the waters of Lake Michigan, and on the third selected and arranged to serve as an introduction

the sweep of Grant Park, with another Greek to the collections assembled in the various rooms

building, the Art Institute, in the distance. It is on either side. Each of the four subjects housed

ot white Georgia marble, and its main architec- in the Museum are represented; but the cases of

tural features are inspired by the Erechtheum. each are placed so far apart and have been so care-