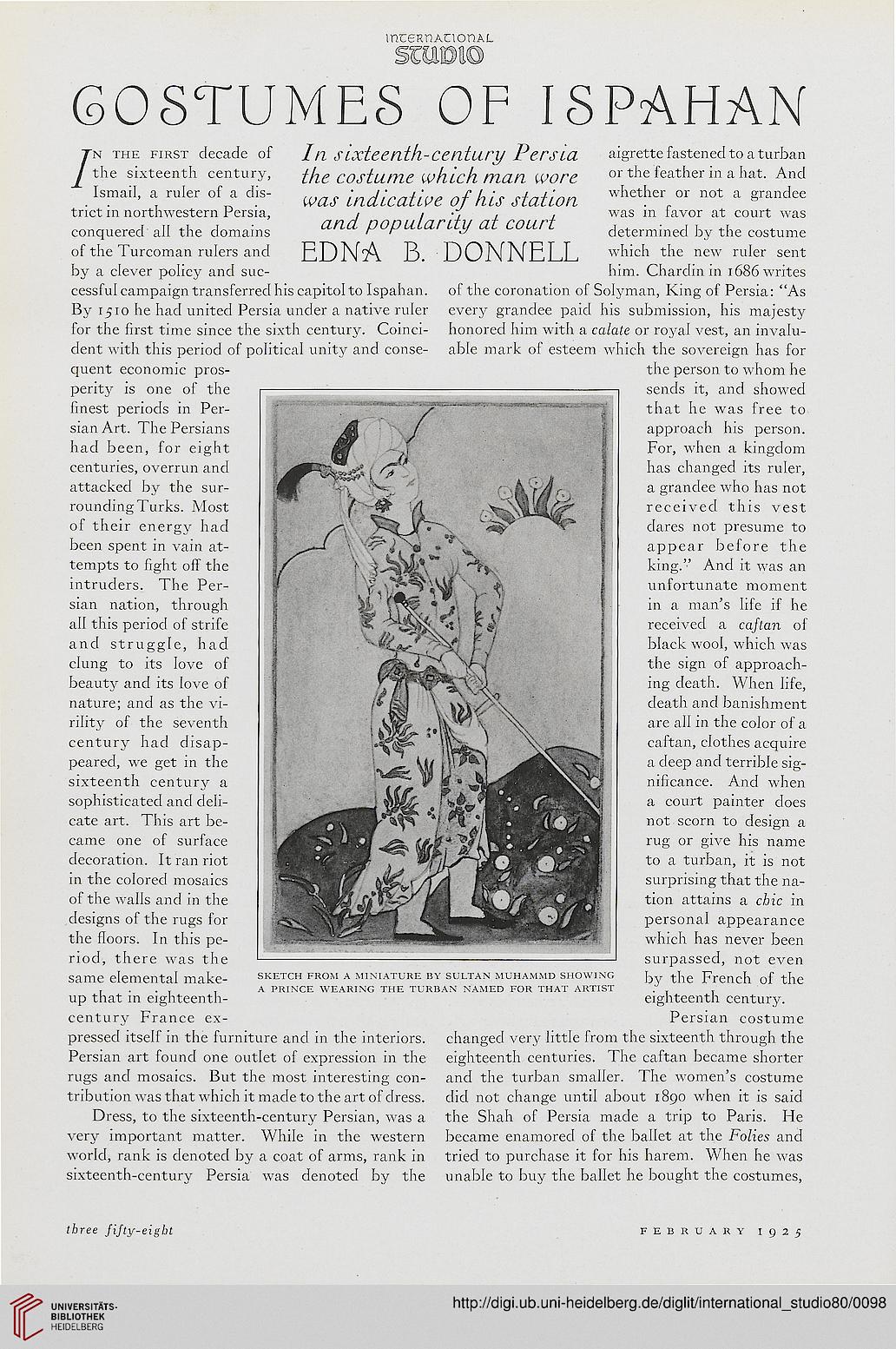 /n the first decade of In S Lxteenth- century Persia aigrette fastened to a turban
the sixteenth century, the Costume which man Wore or the feather in a hat. And
Ismail, a ruler of a dis- ^ ln^cat^e ~f fa station whether or not a Srandee
tnct m northwestern Persia, , / V / / was m lavor at court was

of the Turcoman rulers and EDNA B. DONNELL which thc

by a clever policy and sue- him. Chardin in 1686 writes

cessful campaign transferred his capitol to Ispahan, of the coronation of Solyman, King of Persia: "As
By 1510 he had united Persia under a native ruler every grandee paid his submission, his majesty
for the first time since the sixth century. Coinci- honored him with a calate or royal vest, an invalu-
dent with this period of political unity and conse- able mark of esteem which the sovereign has for
quent economic pros- the person to whom he

perity is one of the
finest periods in Per-
sian Art. The Persians
had been, for eight
centuries, overrun and
attacked by the sur-
rounding Turks. Most
of their energy had
been spent in vain at-
tempts to fight off the
intruders. The Per-
sian nation, through
all this period of strife
and struggle, had
clung to its love of
beauty and its love of
nature; and as the vi-
rility of the seventh
century had disap-
peared, we get in the
sixteenth century a
sophisticated and deli-
cate art. This art be-
came one of surface
decoration. It ran riot
in the colored mosaics
of the walls and in the
designs of the rugs for
the floors. In this pe-
riod, there was the

sends it, and showed
that he was free to
approach his person.
For, when a kingdom
has changed its ruler,
a grandee who has not
received this vest
dares not presume to
appear before the
king." And it was an
unfortunate moment
in a man's life if he
received a caftan of
black wool, which was
thc sign of approach-
ing death. When life,
death and banishment
are all in the color of a
caftan, clothes acquire
a deep and terrible sig-
nificance. And when
a court painter does
not scorn to design a
rug or give his name
to a turban, it is not
surprising that the na-
tion attains a chic in
personal appearance
which has never been
surpassed, not even

same elemental make- sketch from a miniature by sultan muhammd showing ]-,y the French of thc

... a prince wearing the turban named for that artist .

pressed itself in the furniture and in the interiors, changed very little from the sixteenth through the

Persian art found one outlet of expression in the eighteenth centuries. The caftan became shorter

rugs and mosaics. But the most interesting con- and the turban smaller. The women's costume

tribution was that which it made to the art of dress, did not change until about 1890 when it is said

Dress, to the sixteenth-century Persian, was a the Shah of Persia made a trip to Paris. He

very important matter. While in the western became enamored of the ballet at the Folies and

world, rank is denoted by a coat of arms, rank in tried to purchase it for his harem. When he was

sixteenth-century Persia was denoted by the unable to buy the ballet he bought the costumes,