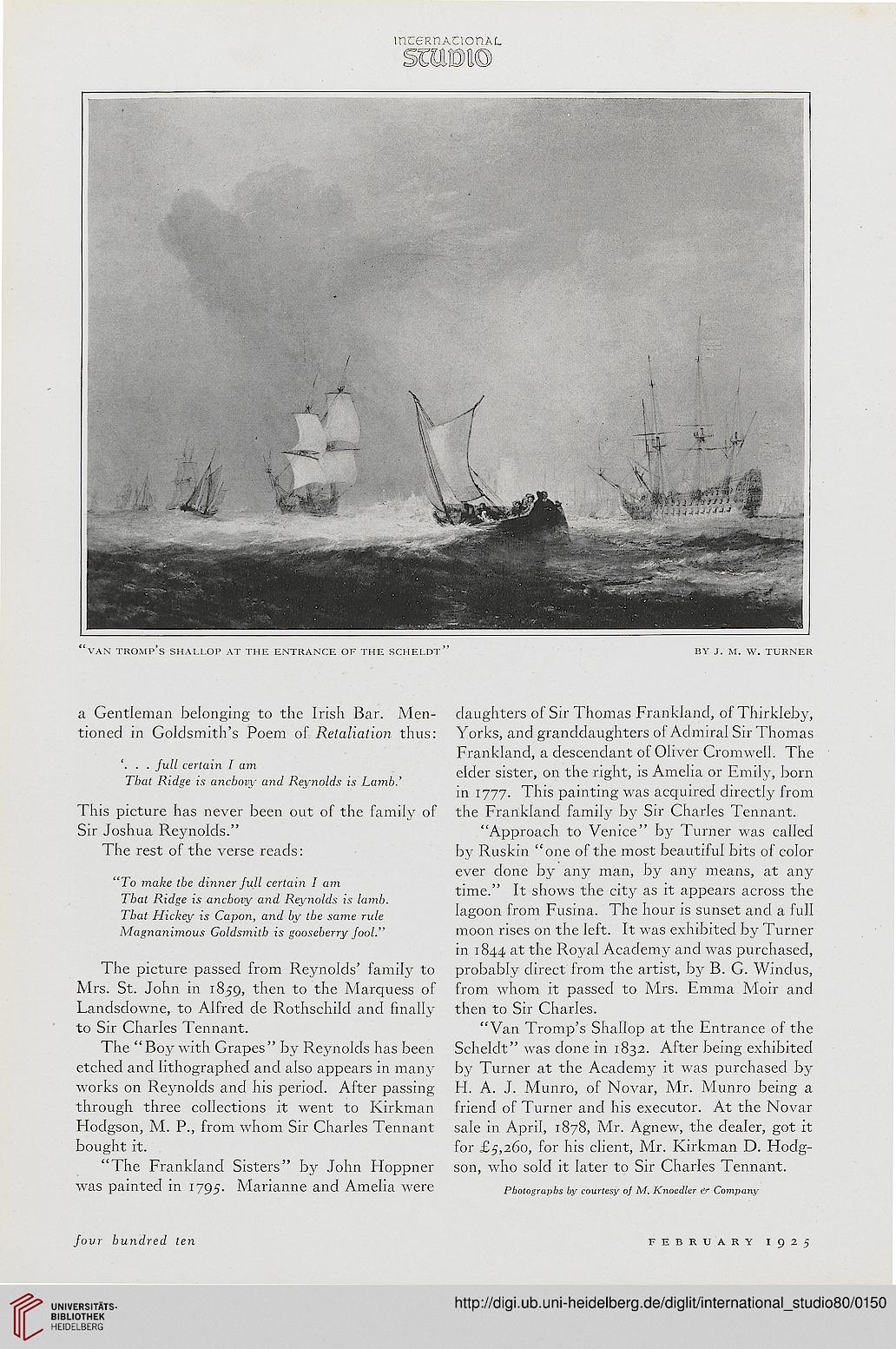 "van tromp's shallop at the entrance of the Scheldt" by j. m. w. turner

a Gentleman belonging to the Irish Bar. Men-
tioned in Goldsmith's Poem of Retaliation thus:

That Ridge is anchovy and Reynolds is Lamb.'

This picture has never been out of the family of
Sir Joshua Reynolds."

The rest of the verse reads:

"To make the dinner full certain I am
That Ridge is anchovy and Reynolds is lamb.
That Hickey is Capon, and by the same rule
Magnanimous Goldsmith is gooseberry Jool."

The picture passed from Reynolds' family to
Mrs. St. John in 1859, then to the Marquess of
Landsdowne, to Alfred de Rothschild and finally
to Sir Charles Tennant.

The "Boy with Grapes" by Reynolds has been
etched and lithographed and also appears in many
works on Reynolds and his period. After passing
through three collections it went to Kirkman
Hodgson, M. P., from whom Sir Charles Tennant
bought it.

"The Frankland Sisters" by John Hoppner
was painted in 1795. Marianne and Amelia were

daughters of Sir Thomas Frankland, of Thirkleby,
Yorks, and granddaughters of Admiral Sir Thomas
Frankland, a descendant of Oliver Cromwell. The
cider sister, on the right, is Amelia or Emily, born
in 1777. This painting was acquired directly from
the Frankland family by Sir Charles Tennant.

"Approach to Venice" by Turner was called
by Ruskin "one of the most beautiful bits of color
ever done by any man, by any means, at any
time." It shows the city as it appears across the
lagoon from Fusina. The hour is sunset and a full
moon rises on the left. It was exhibited by Turner
in 1844 at the Royal Academy and was purchased,
probably direct from the artist, by B. G. Windus,
from whom it passed to Mrs. Emma Moir and
then to Sir Charles.

"Van Tromp's Shallop at the Entrance of the
Scheldt" was done in 1832. After being exhibited
by Turner at the Academy it was purchased by
H. A. J. Munro, of Novar, Mr. Munro being a
friend of Turner and his executor. At the Novar
sale in April, 1878, Mr. Agnew, the dealer, got it
for £5,260, for his client, Mr. Kirkman D. Hodg-
son, who sold it later to Sir Charles Tennant.