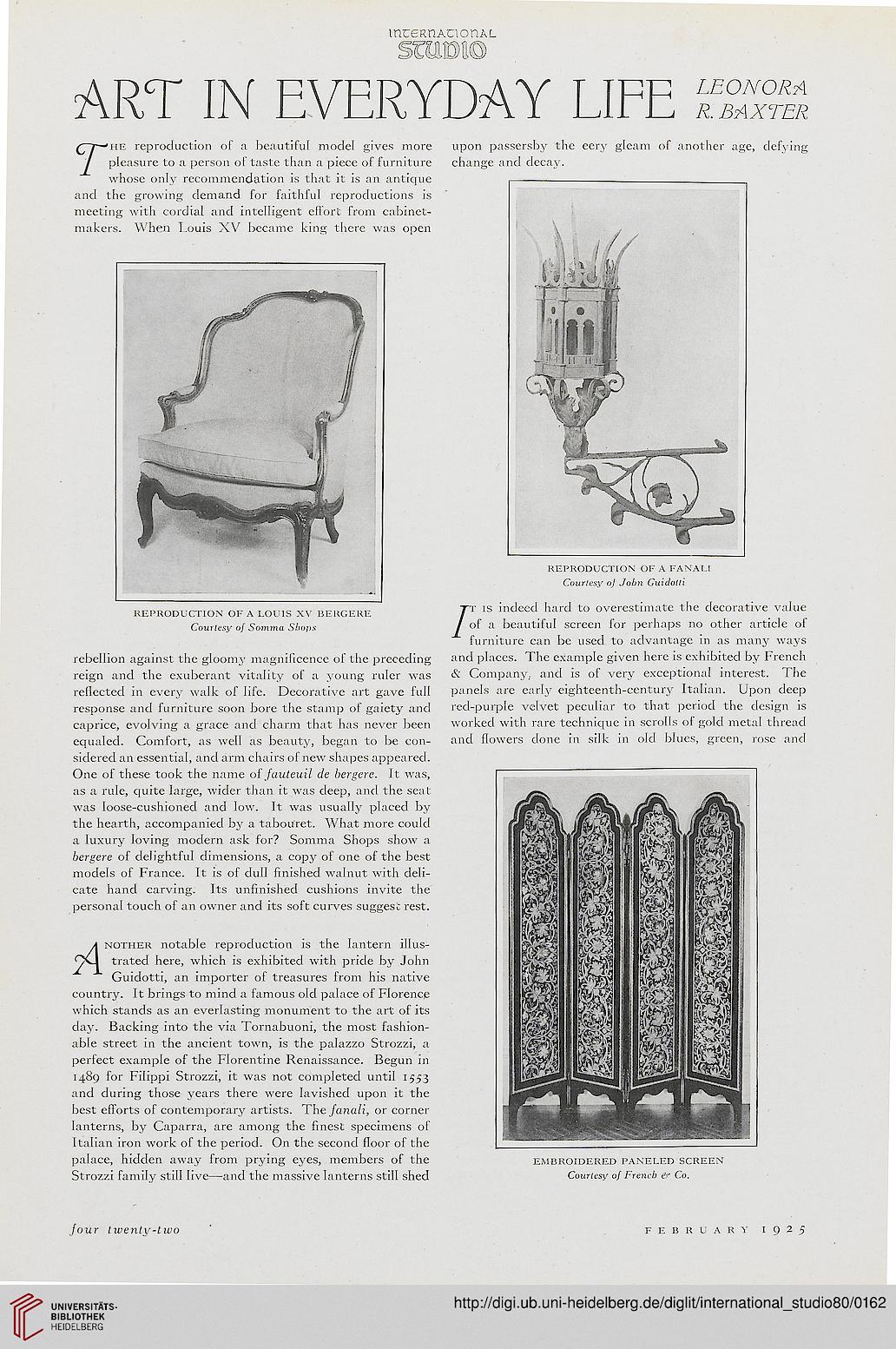 he reproduction of a beautiful model gives more upon passersby the eery gleam of another age, delving
pleasure to a person of taste than a piece of furniture change and decay,
whose only recommendation is that it is an antique
and the growing demand for faithful reproductions is
meeting with cordial and intelligent effort from cabinet-
makers. When Louis XV became king there was open

furniture can be used to advantage in as many ways
rebellion against the gloomy magnificence of the preceding and places. The example given here is exhibited by French
reign and the exuberant vitality of a young ruler was & Company, and is of very exceptional interest. The
reflected in every walk of life. Decorative art gave full panels are early eighteenth-century Italian. Upon deep
response and furniture soon bore the stamp of gaiety and red-purple velvet peculiar to that period the design is
caprice, evolving a grace and charm that has never been worked with rare technique in scrolls of gold metal thread
equaled. Comfort, as well as beauty, began to be con- and flowers done in silk in old blues, green, rose and
sidered an essential, and arm chairs of new shapes appeared.
One of these took the name of fauteuil de bergere. It was,
as a rule, quite large, wider than it was deep, and the seat
was loose-cushioned and low. It was usually placed by
the hearth, accompanied by a tabouret. What more could
a luxury loving modern ask for? Somma Shops show a
bergere of delightful dimensions, a copy of one of the best
models of France. It is of dull finished walnut with deli-
cate hand carving. Its unfinished cushions invite the
personal touch of an owner and its soft curves suggest rest.

A nother notable reproduction is the lantern illus-
^Vj^ trated here, which is exhibited with pride by John
Guidotti, an importer of treasures from his native
country. It brings to mind a famous old palace of Florence
which stands as an everlasting monument to the art of its
day. Backing into the via Tornabuoni, the most fashion-
able street in the ancient town, is the palazzo Strozzi, a
perfect example of the Florentine Renaissance. Begun in
1489 for Filippi Strozzi, it was not completed until 1553
and during those years there were lavished upon it the
best efforts of contemporary artists. The Janali, or corner
lanterns, by Caparra, are among the finest specimens of
Italian iron work of the period. On the second floor of the

palace, hidden away from prying eyes, members of the embroidered paneled screen