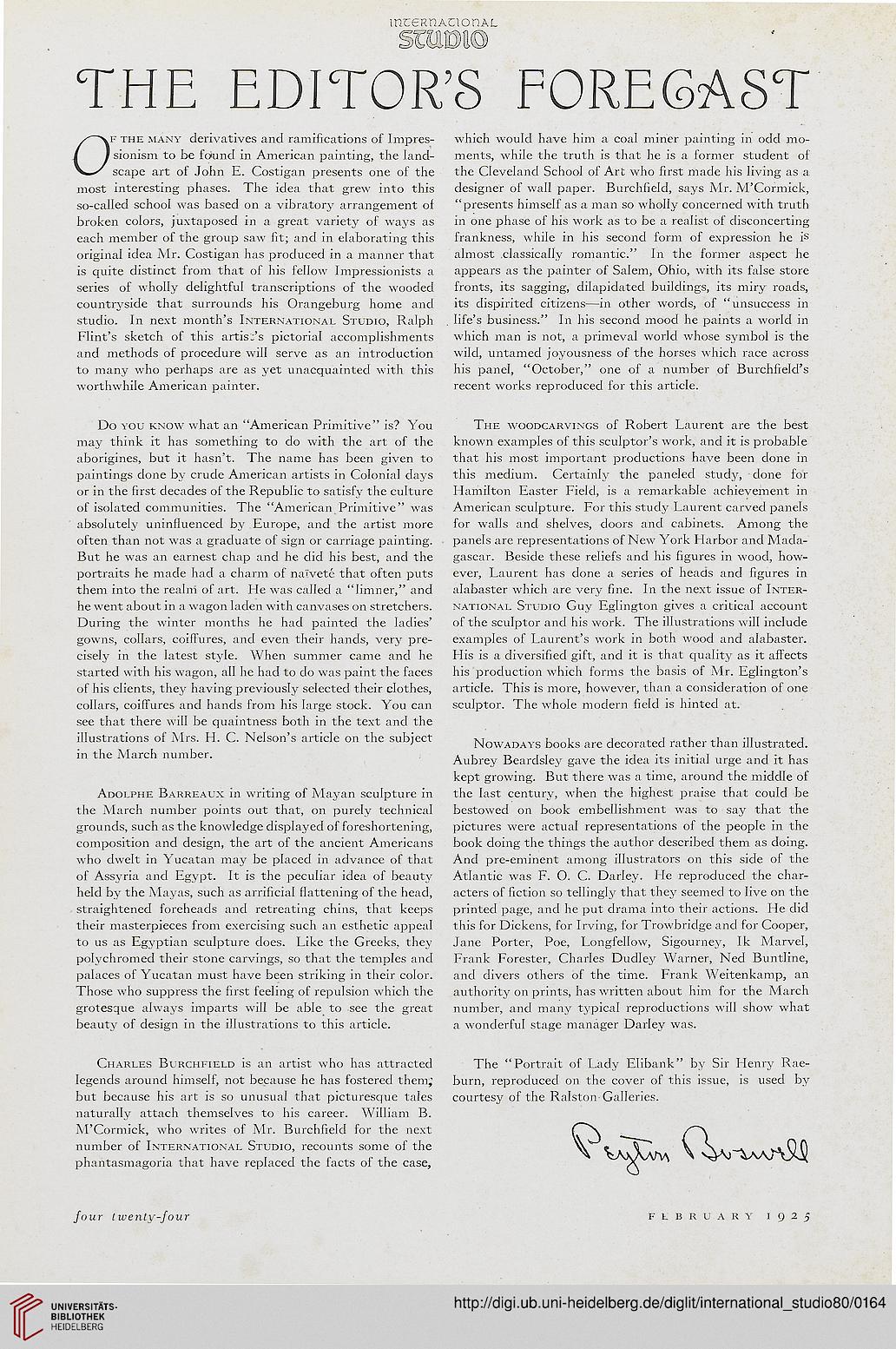 Of the many derivatives and ramifications of Impres-
sionism to be found in American painting, the land-
scape art of John E. Costigan presents one of the
most interesting phases. The idea that grew into this
so-called school was based on a vibratory arrangement of
broken colors, juxtaposed in a great variety of ways as
each member of the group saw fit; and in elaborating this
original idea Mr. Costigan has produced in a manner that
is quite distinct from that of his fellow Impressionists a
series of wholly delightful transcriptions of the wooded
countryside that surrounds his Orangeburg home and
studio. In next month's International Studio, Ralph
Flint's sketch of this artist's pictorial accomplishments
and methods of procedure will serve as an introduction
to many who perhaps are as yet unacquainted with this
worthwhile American painter.

which would have him a coal miner painting in odd mo-
ments, while the truth is that he is a former student of
the Cleveland School of Art who first made his living as a
designer of wall paper. Burchfield, says Mr. M'Cormick,
"presents himself as a man so wholly concerned with truth
in one phase of his work as to be a realist of disconcerting
frankness, while in his second form of expression he is
almost classically romantic." In the former aspect he
appears as the painter of Salem, Ohio, with its false store
fronts, its sagging, dilapidated buildings, its miry roads,
its dispirited citizens—in other words, of "unsuccess in
life's business." In his second mood he paints a world in
which man is not, a primeval world whose symbol is the
wild, untamed joyousness of the horses which race across
his panel, "October," one of a number of Burchlield's
recent works reproduced for this article.

Do you know what an "American Primitive" is? You
may think it has something to do with the art of the
aborigines, but it hasn't. The name has been given to
paintings done by crude American artists in Colonial days
or in the first decades of the Republic to satisfy the culture
of isolated communities. The "American Primitive" was
absolutely uninfluenced by Europe, and the artist more
often than not was a graduate of sign or carriage painting.
But he was an earnest chap and he did his best, and the
portraits he made had a charm of muvete that often puts
them into the realm of art. He was called a "limner," and
he went about in a wagon laden with canvases on stretchers.
During the winter months he had painted the ladies'
gowns, collars, coiffures, and even their hands, very pre-
cisely in the latest style. When summer came and he
started with his wagon, all he had to do was paint the faces
of his clients, they having previously selected their clothes,
collars, coiffures and hands from his large stock. You can
see that there will be quaintness both in the text and the
illustrations of Mrs. H. C. Nelson's article on the subject
in the March number.

Adolphe Barreaux in writing of Mayan sculpture in
the March number points out that, on purely technical
grounds, such as the knowledge displayed of foreshortening,
composition and design, the art of the ancient Americans
who dwelt in Yucatan may be placed in advance of that
of Assyria and Egypt. It is the peculiar idea of beauty
held by the Mayas, such as arrificial flattening of the head,
straightened foreheads and retreating chins, that keeps
their masterpieces from exercising such an esthetic appeal
to us as Egyptian sculpture does. Like the Greeks, they
polychromed their stone carvings, so that the temples and
palaces of Yucatan must have been striking in their color.
Those who suppress the first feeling of repulsion which the
grotesque always imparts will be able to see the great
beauty of design in the illustrations to this article.

The woodcarvings of Robert Laurent are the best
known examples of this sculptor's work, and it is probable
that his most important productions have been done in
this medium. Certainly the paneled study, done for
Hamilton Easter Field, is a remarkable achievement in
American sculpture. For this study Laurent carved panels
for walls and shelves, doors and cabinets. Among the
panels are representations of New York Harbor and Mada-
gascar. Beside these reliefs and his figures in wood, how-
ever, Laurent has done a series of heads and figures in
alabaster which are very fine. In the next issue of Inter-
national Studio Guy Eglington gives a critical account
of the sculptor and his work. The illustrations will include
examples of Laurent's work in both wood and alabaster.
His is a diversified gift, and it is that quality as it affects
his production which forms the basis of Mr. Eglington's
article. This is more, however, than a consideration of one
sculptor. The whole modern field is hinted at.

Nowadays books are decorated rather than illustrated.
Aubrey Beardsley gave the idea its initial urge and it has
kept growing. But there was a time, around the middle of
the last century, when the highest praise that could be
bestowed on book embellishment was to say that the
pictures were actual representations of the people in the
book doing the things the author described them as doing.
And pre-eminent among illustrators on this side of the
Atlantic was F. O. C. Darley. He reproduced the char-
acters of fiction so tellingly that they seemed to live on the
printed page, and he put drama into their actions. He did
this for Dickens, for Irving, for Trowbridge and for Cooper,
Jane Porter, Poe, Longfellow, Sigourney, Ik Marvel,
Frank Forester, Charles Dudley Warner, Ned Buntline,
and divers others of the time. Frank Weitenkamp, an
authority on prints, has written about him for the March
number, and many typical reproductions will show what
a wonderful stage manager Darley was.

Iegends around himself, not because he has fostered them; burn, reproduced on the cover of this issue, is used by
but because his art is so unusual that picturesque tales courtesy of the Ralston Galleries,
naturally attach themselves to his career. William B.
M'G

ormick, who writes of Mr. Burchfield for the next (~"N\

phantasmagoria that have replaced the facts of the case, y(