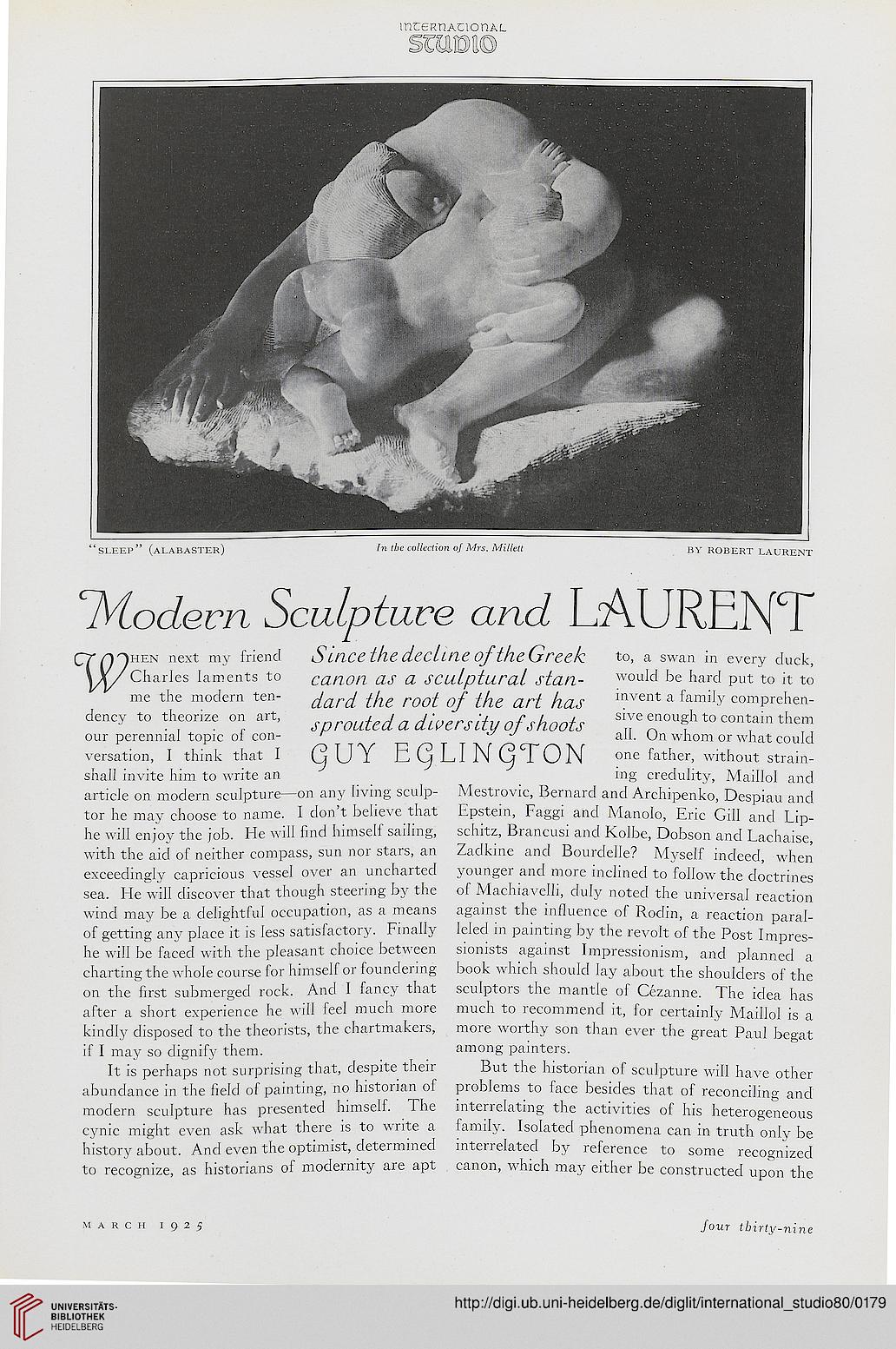 Q-n^HEN next my friend Sincethe decline of the Greek to, a swan in every duck,
\}{/ Charles laments to canon (IS a Sculptural Stan- would be hard put to it to
me the modern ten- fa roof Qf fa ar{ nas invent a family comprehen-

dency to theorize on art, sprouted a diversity of shoots SI|e ^ouf ^ contain them
our perennial topic of con- r ^ all. Un whom or what could

versation, I think that I GUY EC^LINC^TON one father, without strain-
shall invite him to write an ing credulity, Maillol and
article on modern sculpture—on any living sculp- Mestrovic, Bernard and Archipenko, Despiau and
tor he may choose to name. I don't believe that Epstein, Faggi and Manolo, Eric Gill and Lip-
he will enjoy the job. He will find himself sailing, schitz, Brancusi and Kolbe, Dobson and Lachaise,
with the aid of neither compass, sun nor stars, an Zadkine and Bourdelle? Myself indeed, when
exceedingly capricious vessel over an uncharted younger and more inclined to follow the doctrines
sea. He will discover that though steering by the of Machiavelli, duly noted the universal reaction
wind may be a delightful occupation, as a means against the influence of Rodin, a reaction paral-
of getting any place it is less satisfactory. Finally Ieled in painting by the revolt of the Post Impres-
he will be faced with the pleasant choice between sionists against Impressionism, and planned a
charting the whole course for himself or foundering book which should lay about the shoulders of the
on the first submerged rock. And 1 fancy that sculptors the mantle of Cezanne. The idea has
after a short experience he will feel much more much to recommend it, for certainly Maillol is a
kindly disposed to the theorists, the chartmakers, more worthy son than ever the great Paul begat
if I may so dignify them. _ among painters.

It is perhaps not surprising that, despite their But the historian of sculpture will have other
abundance in the field of painting, no historian of problems to face besides that of reconciling and
modern sculpture has presented himself. The interrelating the activities of his heterogeneous
cynic might even ask what there is to write a family. Isolated phenomena can in truth only be
history about. And even the optimist, determined interrelated by reference to some recognized
to recognize, as historians of modernity are apt canon, which may either be constructed upon the