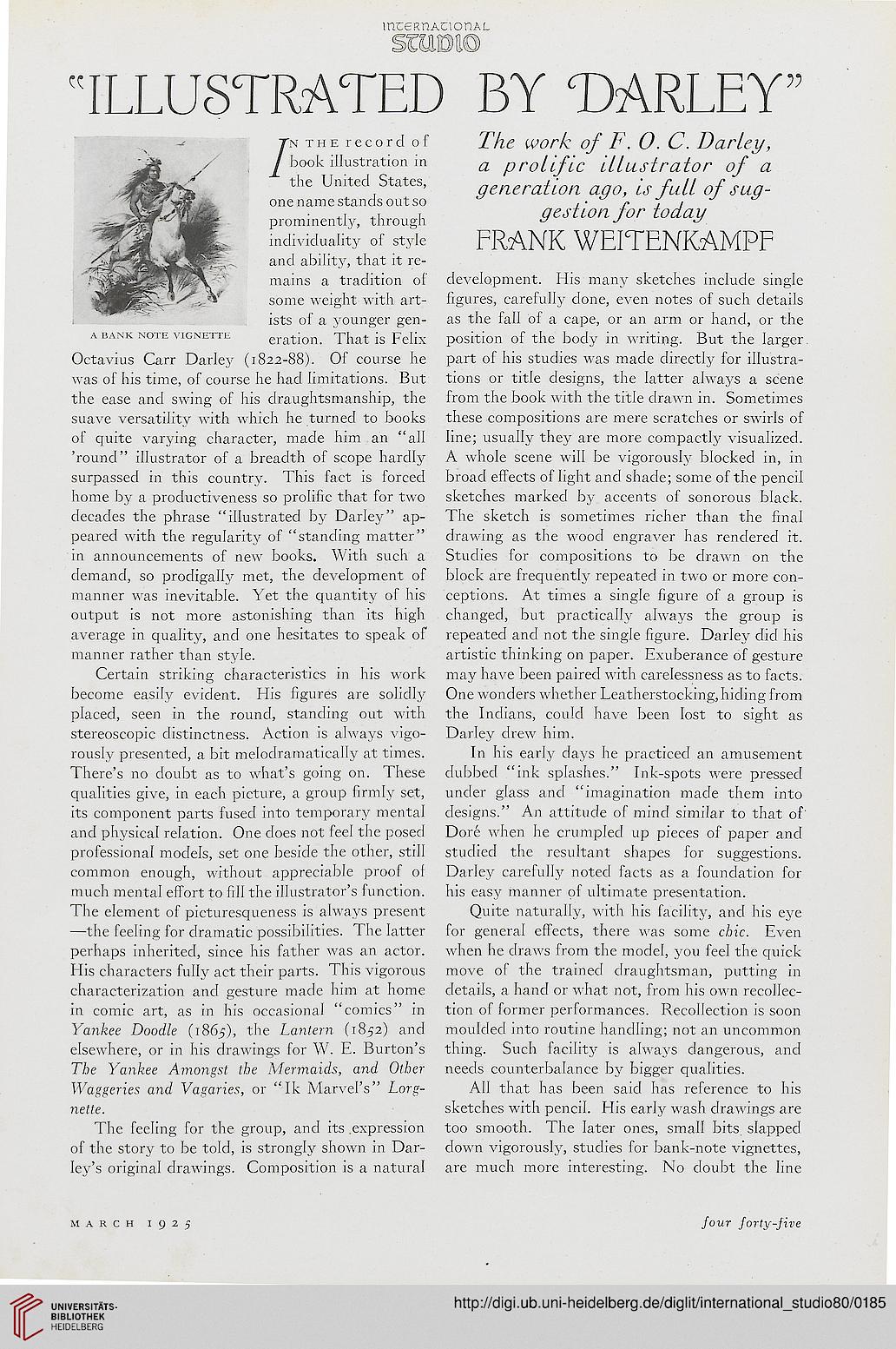 book illustration in a prollfLC illustrator of a

the United States, generation ago, is full of sug-

prominently, through & J
individuality of style PRANK WEITENKAMPF
and ability, that it re-
mains a tradition of development. His many sketches include single
some weight with art- figures, carefully done, even notes of such details
ists of a younger gen- as the fall of a cape, or an arm or hand, or the
a bank note vignette eration. That is Felix position of the body in writing. But the larger
Octavius Carr Darley (1822-88). Of course he part of his studies was made directly for illustra-
was of his time, of course he had limitations. But tions or title designs, the latter always a scene
the ease and swing of his draughtsmanship, the from the book with the title drawn in. Sometimes
suave versatility with which he turned to books these compositions are mere scratches or swirls of
of quite varying character, made him an "all line; usually they are more compactly visualized,
'round" illustrator of a breadth of scope hardly A whole scene will be vigorously blocked in, in
surpassed in this country. This fact is forced broad effects of light and shade; some of the pencil
home by a productiveness so prolific that for two sketches marked by accents of sonorous black,
decades the phrase "illustrated by Darley" ap- The sketch is sometimes richer than the final
peared with the regularity of "standing matter" drawing as the wood engraver has rendered it.
in announcements of new books. With such a Studies for compositions to be drawn on the
demand, so prodigally met, the development of block are frequently repeated in two or more con-
manner was inevitable. Yet the quantity of his ceptions. At times a single figure of a group is
output is not more astonishing than its high changed, but practically always the group is
average in quality, and one hesitates to speak of repeated and not the single figure. Darley did his
manner rather than style. artistic thinking on paper. Exuberance of gesture
Certain striking characteristics in his work may have been paired with carelessness as to facts,
become easily evident. His figures are solidly One wonders whether Leatherstocking, hiding from
placed, seen in the round, standing out with the Indians, could have been lost to sight as
stereoscopic distinctness. Action is always vigo- Darley drew him.

rously presented, a bit melodramatically at times. In his early days he practiced an amusement

There's no doubt as to what's going on. These dubbed "ink splashes." Ink-spots were pressed

qualities give, in each picture, a group firmly set, under glass and "imagination made them into

its component parts fused into temporary mental designs." An attitude of mind similar to that of

and physical relation. One does not feel the posed Dore when he crumpled up pieces of paper and

professional models, set one beside the other, still studied the resultant shapes for suggestions,

common enough, without appreciable proof of Darley carefully noted facts as a foundation for

much mental effort to fill the illustrator's function, his easy manner of ultimate presentation.

The element of picturesqueness is always present Quite naturally, with his facility, and his eye

—the feeling for dramatic possibilities. The latter for general effects, there was some chic. Even

perhaps inherited, since his father was an actor, when he draws from the model, you feel the quick

His characters fully act their parts. This vigorous move of the trained draughtsman, putting in

characterization and gesture made him at home details, a hand or what not, from his own recollec-

in comic art, as in his occasional "comics" in tion of former performances. Recollection is soon

Yankee Doodle (1865), the Lantern (1852) and moulded into routine handling; not an uncommon

elsewhere, or in his drawings for W. E. Burton's thing. Such facility is always dangerous, and

The Yankee Amongst the Mermaids, and Other needs counterbalance by bigger qualities.

Waggeries and Vagaries, or "Ik Marvel's" Lorg- All that has been said has reference to his

nette. sketches with pencil. His early wash drawings are

The feeling for the group, and its expression too smooth. The later ones, small bits slapped

of the story to be told, is strongly shown in Dar- down vigorously, studies for bank-note vignettes,

ley's original drawings. Composition is a natural are much more interesting. No doubt the line