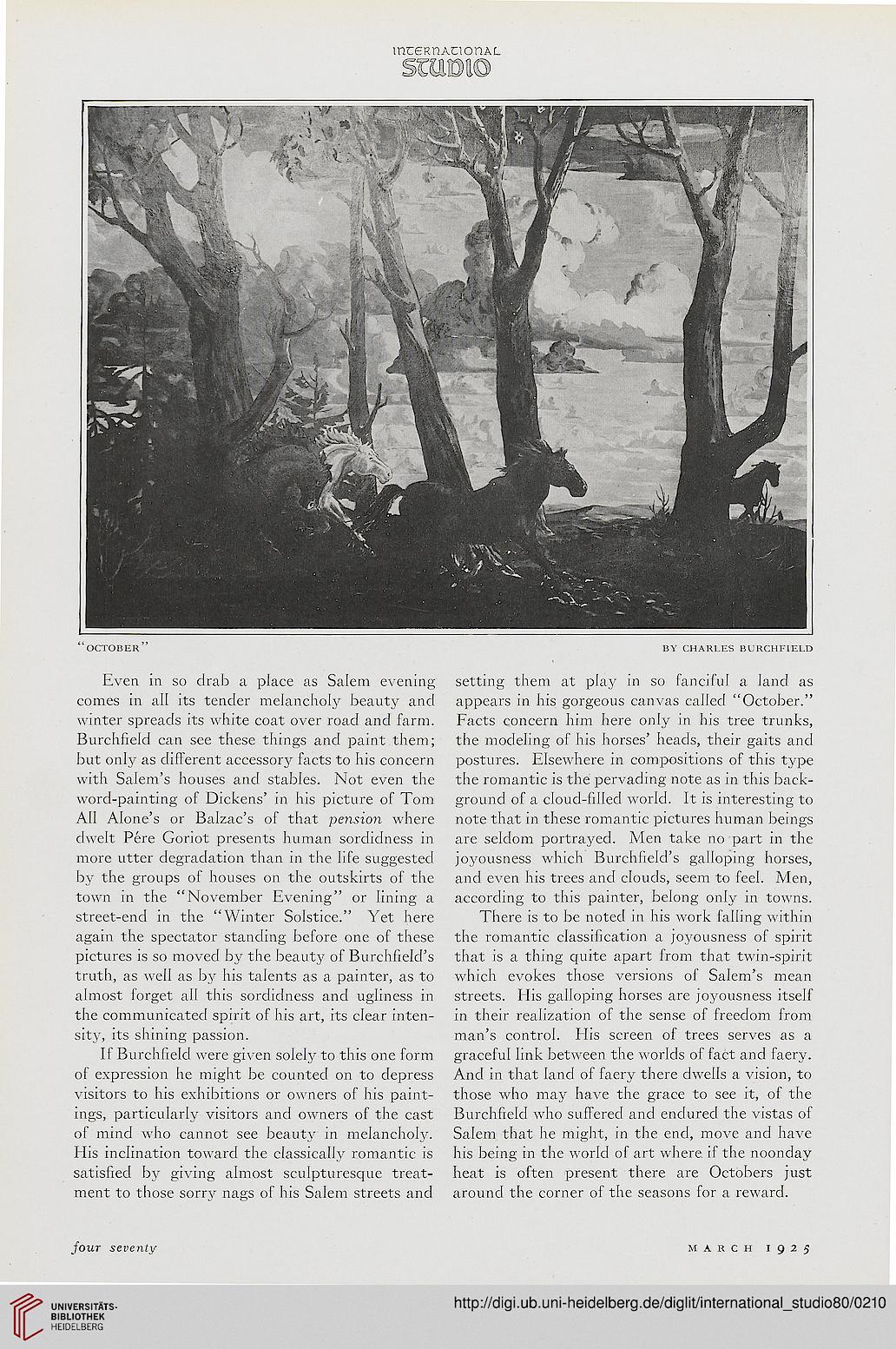 Even in so drab a place as Salem evening setting them at play in so ianciful a land as
comes in all its tender melancholy beauty and appears in his gorgeous canvas called "October."
winter spreads its white coat over road and farm. Facts concern him here only in his tree trunks,
Burchfield can see these things and paint them; the modeling of his horses' heads, their gaits and
but only as different accessory facts to his concern postures. Elsewhere in compositions of this type
with Salem's houses and stables. Not even the the romantic is the pervading note as in this back-
word-painting of Dickens' in his picture of Tom ground of a cloud-filled world. It is interesting to
All Alone's or Balzac's of that pension where note that in these romantic pictures human beings
dwelt Pere Gonot presents human sordidness in are seldom portrayed. Men take no part in the
more utter degradation than in the life suggested joyousness which Burchlield's galloping horses,
by the groups of houses on the outskirts of the and even his trees and clouds, seem to feel. Men,
town in the "November Evening" or lining a according to this painter, belong only in towns,
street-end in the "Winter Solstice." Yet here There is to be noted in his work falling within
again the spectator standing before one of these the romantic classification a joyousness of spirit
pictures is so moved by the beauty of Burchfield's that is a thing quite apart from that twin-spirit
truth, as well as by his talents as a painter, as to which evokes those versions of Salem's mean
almost forget all this sordidness and ugliness in streets. His galloping horses are joyousness itself
the communicated spirit of his art, its clear inten- in their realization of the sense of freedom from
sity, its shining passion. man's control. His screen of trees serves as a

If Burchfield were given solely to this one form graceful link between the worlds of fact and faery,

of expression he might be counted on to depress And in that land of faery there dwells a vision, to

visitors to his exhibitions or owners of his paint- those who may have the grace to see it, of the

ings, particularly visitors and owners of the cast Burchfield who suffered and endured the vistas of

ol mind who cannot see beauty in melancholy. Salem that he might, in the end, move and have

ment to those sorry nags of his Salem streets and around the corner of the seasons for a reward.