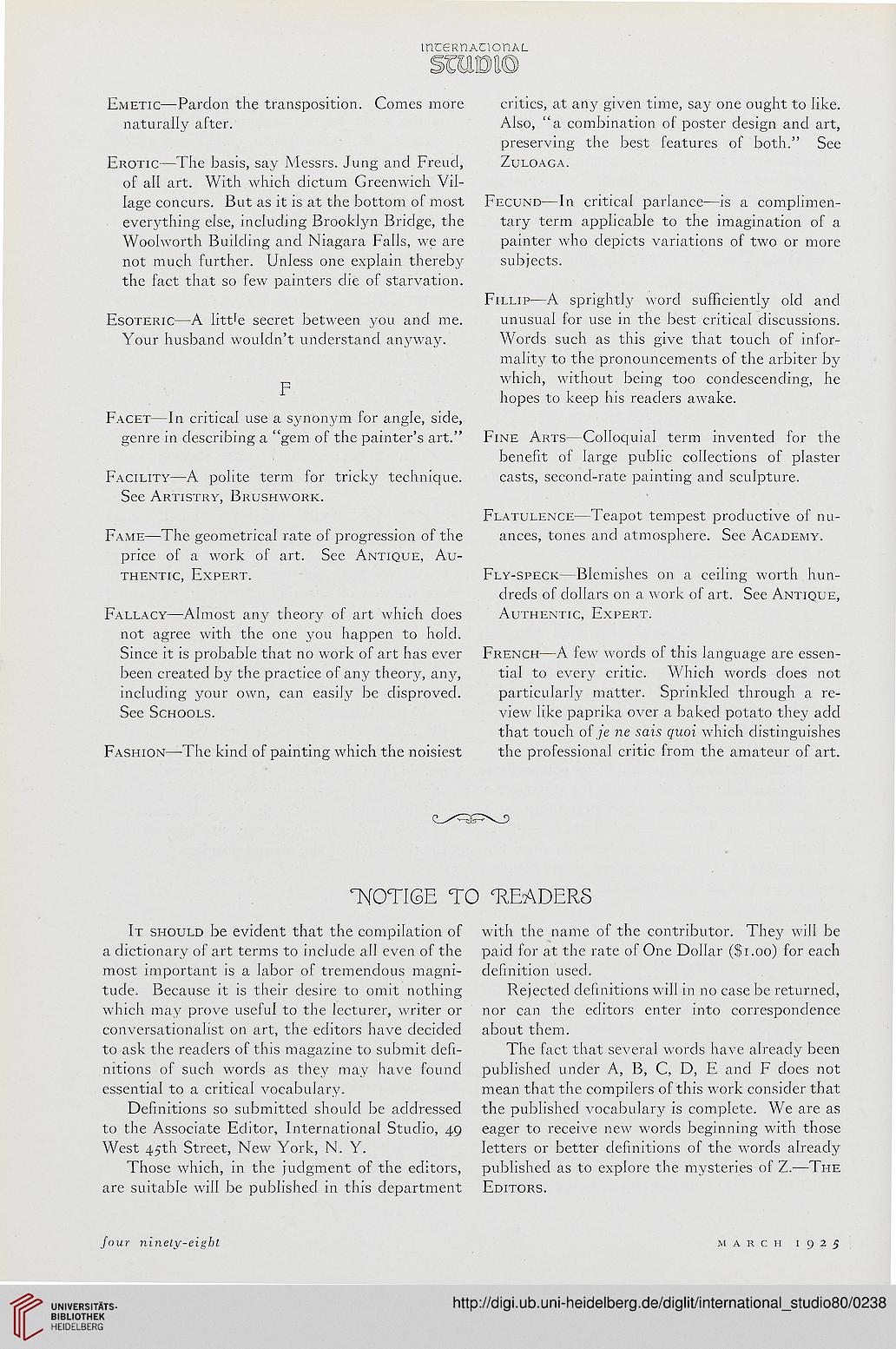 Erotic—The basis, say Messrs. Jung and Freud,
of all art. With which dictum Greenwich Vil-
lage concurs. But as it is at the bottom of most
everything else, including Brooklyn Bridge, the
Woolworth Building and Niagara Falls, we are
not much further. Unless one explain thereby
the fact that so few painters die of starvation.

Esoteric—A Iitt'e secret between you and me.
Your husband wouldn't understand anyway.

Facet—In critical use a synonym for angle, side,
genre in describing a "gem of the painter's art."

Fame—The geometrical rate of progression of the
price of a work of art. Sec Antique, Au-
thentic, Expert.

Fallacy—Almost any theory of art which does
not agree with the one you happen to hold.
Since it is probable that no work of art has ever
been created by the practice of any theory, any,
including your own, can easily be disproved.
See Schools.

Fashion—The kind of painting which the noisiest

critics, at any given time, say one ought to like.
Also, "a combination of poster design and art,
preserving the best features of both." See
Zuloaga.

Fecund—In critical parlance—is a complimen-
tary term applicable to the imagination of a
painter who depicts variations of two or more
subjects.

Fillip—A sprightly word sufficiently old and
unusual for use in the best critical discussions.
Words such as this give that touch of infor-
mality to the pronouncements of the arbiter by
which, without being too condescending, he
hopes to keep his readers awake.

Fly-speck—Blemishes on a ceiling worth hun-
dreds of dollars on a work of art. See Antique,
Authentic, Expert.

French—A few words of this language are essen-
tial to every critic. Which words does not
particularly matter. Sprinkled through a re-
view like paprika over a baked potato they add
that touch of je ne sais quoi which distinguishes
the professional critic from the amateur of art.

It should be evident that the compilation of
a dictionary of art terms to include all even of the
most important is a labor of tremendous magni-
tude. Because it is their desire to omit nothing
which may prove useful to the lecturer, writer or
conversationalist on art, the editors have decided
to ask the readers of this magazine to submit defi-
nitions of such words as they may have found
essential to a critical vocabulary-
Definitions so submitted should be addressed
to the Associate Editor, International Studio, 49
West 45th Street, New York, N. Y.

Those which, in the judgment of the editors,
are suitable will be published in this department

with the name of the contributor. They will be
paid for at the rate of One Dollar ($1.00) for each
definition used.

Rejected definitions will in no case be returned,
nor can the editors enter into correspondence
about them.

The fact that several words have already been
published under A, B, C, D, E and F does not
mean that the compilers of this work consider that
the published vocabulary is complete. We are as
eager to receive new words beginning with those
letters or better definitions of the words already
published as to explore the mysteries of Z.—The
Editors.