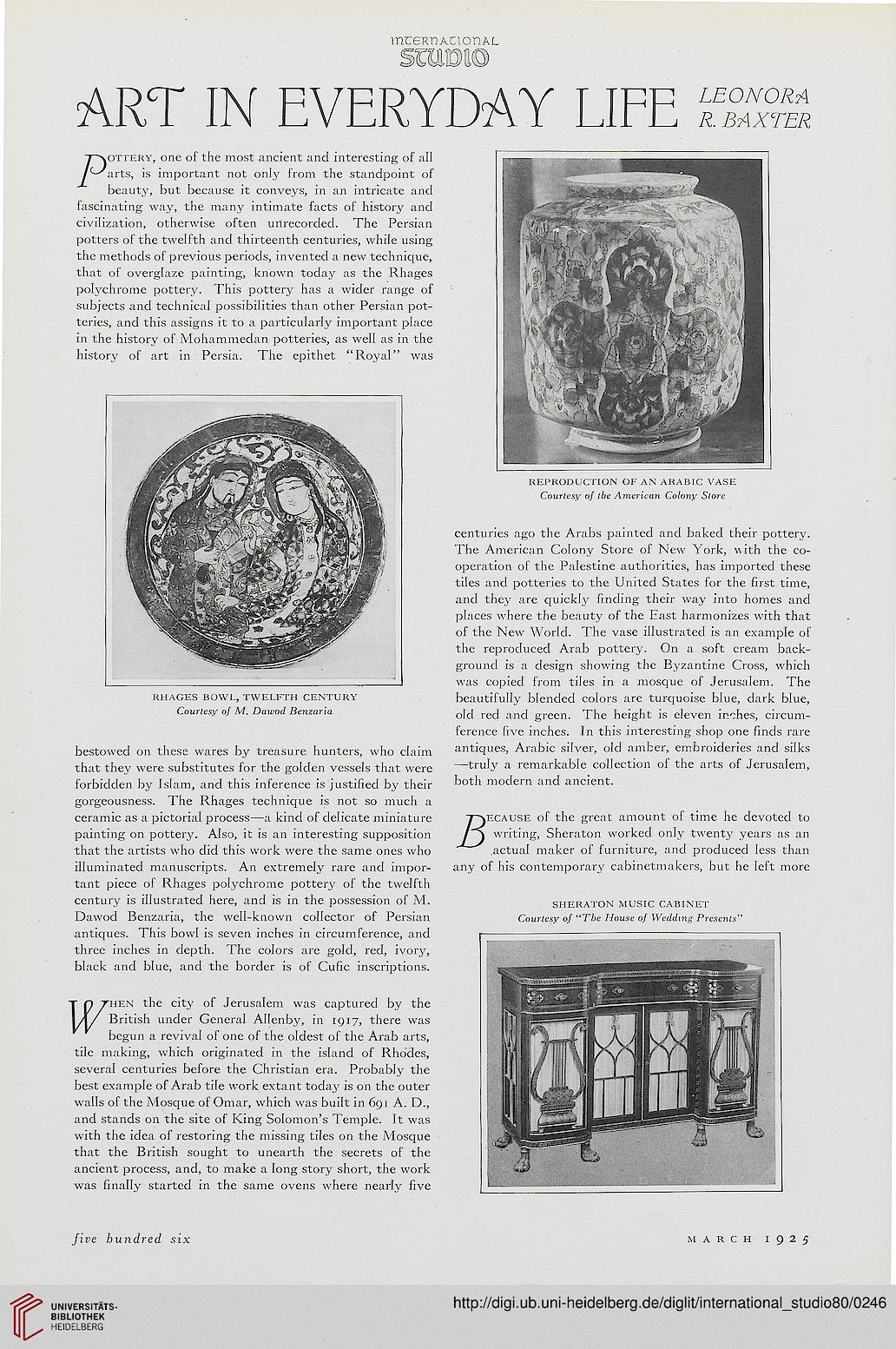 Pottery, one of the most ancient and interesting of all
arts, is important not only from the standpoint of
beauty, but because it conveys, in an intricate and
fascinating way, the many intimate facts of history and
civilization, otherwise often unrecorded. The Persian
potters of the twelfth and thirteenth centuries, while using
the methods of previous periods, invented a new technique,
that of overglaze painting, known today as the Rhages
polychrome pottery. This pottery has a wider range of
subjects and technical possibilities than other Persian pot-
teries, and this assigns it to a particularly important place
in the history of Mohammedan potteries, as well as in the
history of art in Persia. The epithet "Royal" was

centuries ago the Arabs painted and baked their pottery.
The American Colony Store of New York, with the co-
operation of the Palestine authorities, has imported these
tiles and potteries to the United States for the first time,
and they are quickly finding their way into homes and
places where the beauty of the East harmonizes with that
of the New World. The vase illustrated is an example of
the reproduced Arab pottery. On a soft cream back-
ground is a design showing the Byzantine Cross, which
was copied from tiles in a mosque of Jerusalem. The
beautifully blended colors are turquoise blue, dark blue,
old red and green. The height is eleven inches, circum-
ference five inches. In this interesting shop one finds rare
bestowed on these wares by treasure hunters, who claim antiques, Arabic silver, old amber, embroideries and silks
that they were substitutes for the golden vessels that were —truly a remarkable collection of the arts of Jerusalem,
forbidden by Islam, and this inference is justified by their DOtn modern and ancient,
gorgeousness. The Rhages technique is not so much a

ceramic as a pictorial process—a kind of delicate miniature t~\ecause of the great amount of time he devoted to
painting on pottery. Also, it is an interesting supposition / y writing, Sheraton worked only twenty years as an
that the artists who did this work were the same ones who actual maker of furniture, and produced less than

illuminated manuscripts. An extremely rare and impor- any of his contemporary cabinetmakers, but he left more
tant piece of Rhages polychrome pottery of the twelfth

century is illustrated here, and is in the possession of M. sheraton music cabinet

antiques. This bowl is seven inches in circumference, and
three inches in depth. The colors are gold, red, ivory,
black and blue, and the border is of Cufic inscriptions.

t n Then the city of Jerusalem was captured by the
\A/ British under General Allenby, in 1917, there was
begun a revival of one of the oldest of the Arab arts,
tile making, which originated in the island of Rhodes,
several centuries before the Christian era. Probably the
best example of Arab tile work extant today is on the outer
walls of the Mosque of Omar, which was built in 691 A. D.,
and stands on the site of King Solomon's Temple. It was
with the idea of restoring the missing tiles on the Mosque
that the British sought to unearth the secrets of the
ancient process, and, to make a long story short, the work
was finally started in the same ovens where nearly five