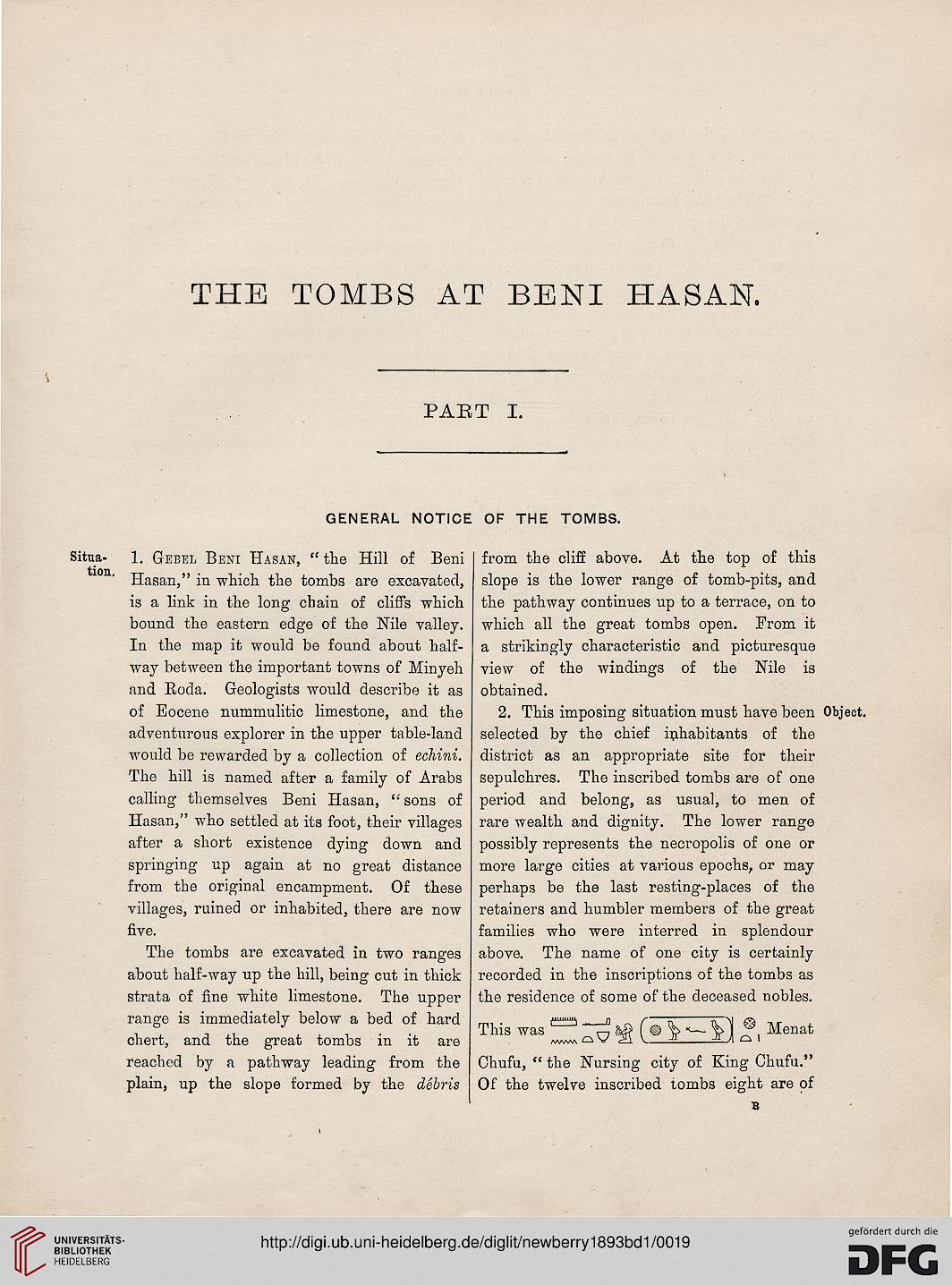 Information about OCR text
THE TOMBS AT BENI HASAN.

Situa- 1. Gebel Bbni Hasan, " the Hill of Beni
Hasan," in which the tombs are excavated,
is a link in the long chain of cliffs which
bound the eastern edge of the Nile valley.
In the map it would be found about half-
way between the important towns of Minyeh
and Eoda. Geologists would describe it as
of Eocene nummulitic limestone, and the
adventurous explorer in the upper table-land
would be rewarded by a collection of echini.
The hill is named after a family of Arabs
calling themselves Beni Hasan, " sons of
Hasan," who settled at its foot, their villages
after a short existence dying down and
springing up again at no great distance
from the original encampment. Of these
villages, ruined or inhabited, there are now
five.

The tombs are excavated in two ranges
about half-way up the hill, being cut in thick
strata of fine white limestone. The upper
range is immediately below a bed of hard
chert, and the great tombs in it are
reached by a pathway leading from the
plain, up the slope formed by the debris

from the cliff above. At the top of this
slope is the lower range of tomb-pits, and
the pathway continues up to a terrace, on to
which all the great tombs open. From it
a strikingly characteristic and picturesque
view of the windings of the Nile is
obtained.

2. This imposing situation must have been Object,
selected by the chief inhabitants of the
district as an appropriate site for their
sepulchres. The inscribed tombs are of one
period and belong, as usual, to men of
rare wealth and dignity. The lower range
possibly represents the necropolis of one or
more large cities at various epochs, or may
perhaps be the last resting-places of the
retainers and humbler members of the great
families who were interred in splendour
above. The name of one city is certainly
recorded in the inscriptions of the tombs as
the residence of some of the deceased nobles.

Chufu, " the Nursing city of King Chufu."
Of the twelve inscribed tombs eight are of