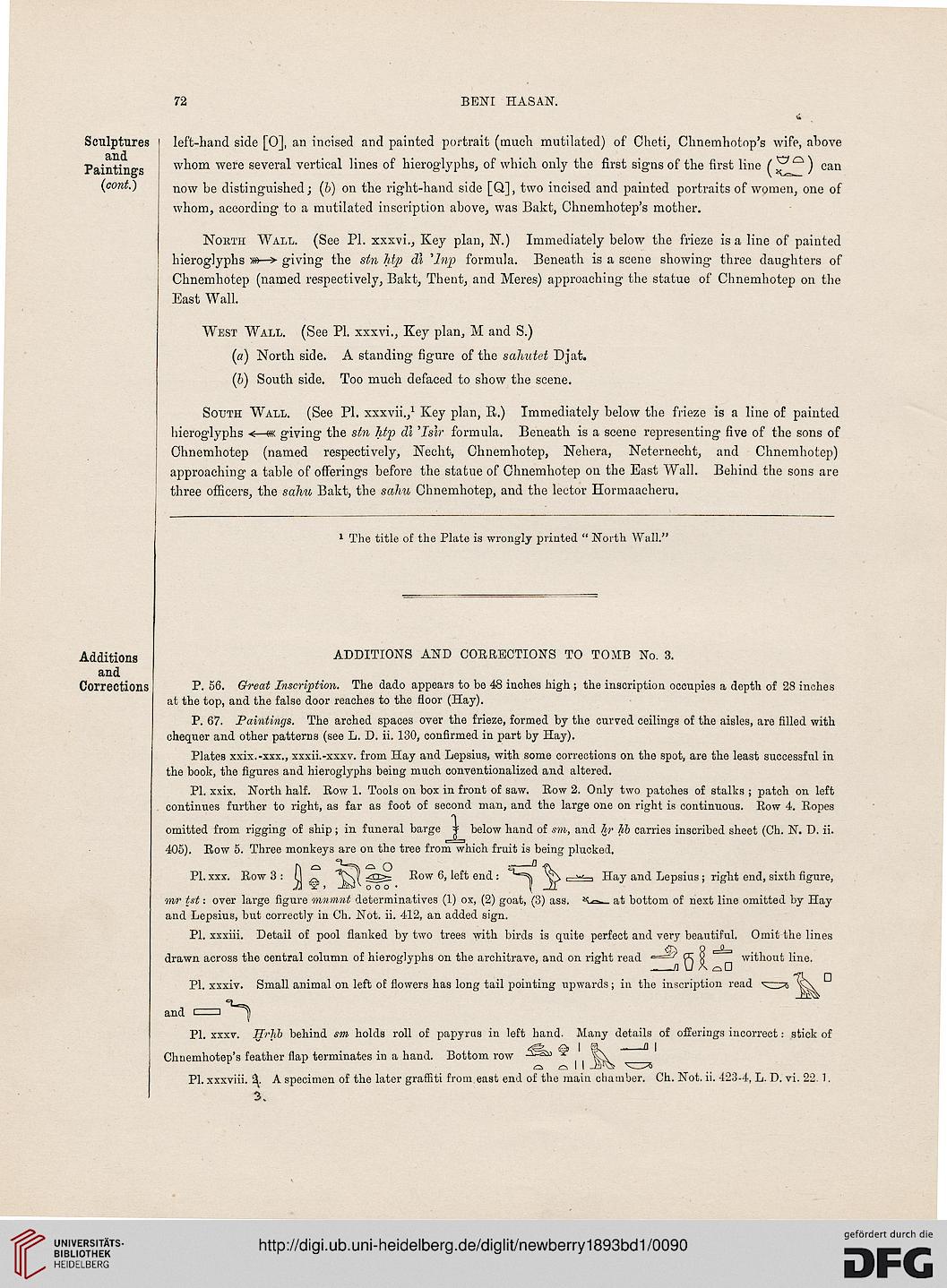 left-hand side [0], an incised and painted portrait (much mutilated) of Cheti, Chnemhotop's wife, ahove
whom were several vertical lines of hieroglyphs, of which only the first signs of the first line ( ^Q ) can
now be distinguished; (b) on the right-hand side [Q], two incised and painted portraits of women, one of
whom, according to a mutilated inscription above, was Bakt, Chnemhotep's mother.

North Wall. (See PI. xxxvi., Key plan, N.) Immediately below the frieze is a line of painted
hieroglyphs >»—> giving the stn htp dl Unp formula. Beneath is a scene showing three daughters of
Chnemhotep (named respectively, Bakt, Thent, and Meres) approaching the statue of Chnemhotep on the
East Wall.

(a) North side. A standing figure of the sahutet Djat.

(b) South side. Too much defaced to show the scene.

South Wall. (See PI. xxxvii.,1 Key plan, R.) Immediately below the frieze is a line of painted
hieroglyphs <—wc giving the stn htp di 'Jslr formula. Beneath is a scene representing five of the sons of
Chnemhotep (named respectively, Necht, Chnemhotep, Nehera, Neternecht, and Chnemhotep)
approaching a table of offerings before the statue of Chnemhotep on the East Wall. Behind the sons are
three officers, the sahu Bakt, the salm Chnemhotep, and the lector Hormaacheru.

1 The title of the Plate is wrongly printed " North Wall."

ADDITIONS AND CORRECTIONS TO TOMB No. 3.

P. 56. Great Inscription. The dado appears to be 48 inches high ; the inscription occupies a depth of 28 inches
at the top, and the false door reaches to the floor (Hay).

P. 67. Paintings. The arched spaces over the frieze, formed by the curved ceilings of the aisles, are filled with
chequer and other patterns (see L. D. ii. 130, confirmed in part by Hay).

Plates xxix.-xxx., xxxii.-xxxv. from Hay and Lepsius, with some corrections on the spot, are the least successful in
the book, the figures and hieroglyphs being much conventionalized and altered.

PI. xxix. North half. Row 1. Tools on box in front of saw. Row 2. Only two patches of stalks ; patch on left
continues further to right, as far as foot of second man, and the large one on right is continuous. Row 4. Ropes

omitted from rigging of ship; in funeral barge below hand of sm, and hr Kb carries inscribed sheet (Ch. N. D. ii.
405). Row 5. Three monkeys are on the tree from which fruit is being plucked.

PI. xxxiii. Detail of pool flanked by two trees with birds is quite perfect and very beautiful. Omit the lines

Hay and Lepsius ; right end, sixth figure,
— at bottom of next line omitted by Hay

drawn across the central column of hieroglyphs on the architrave, and on right read