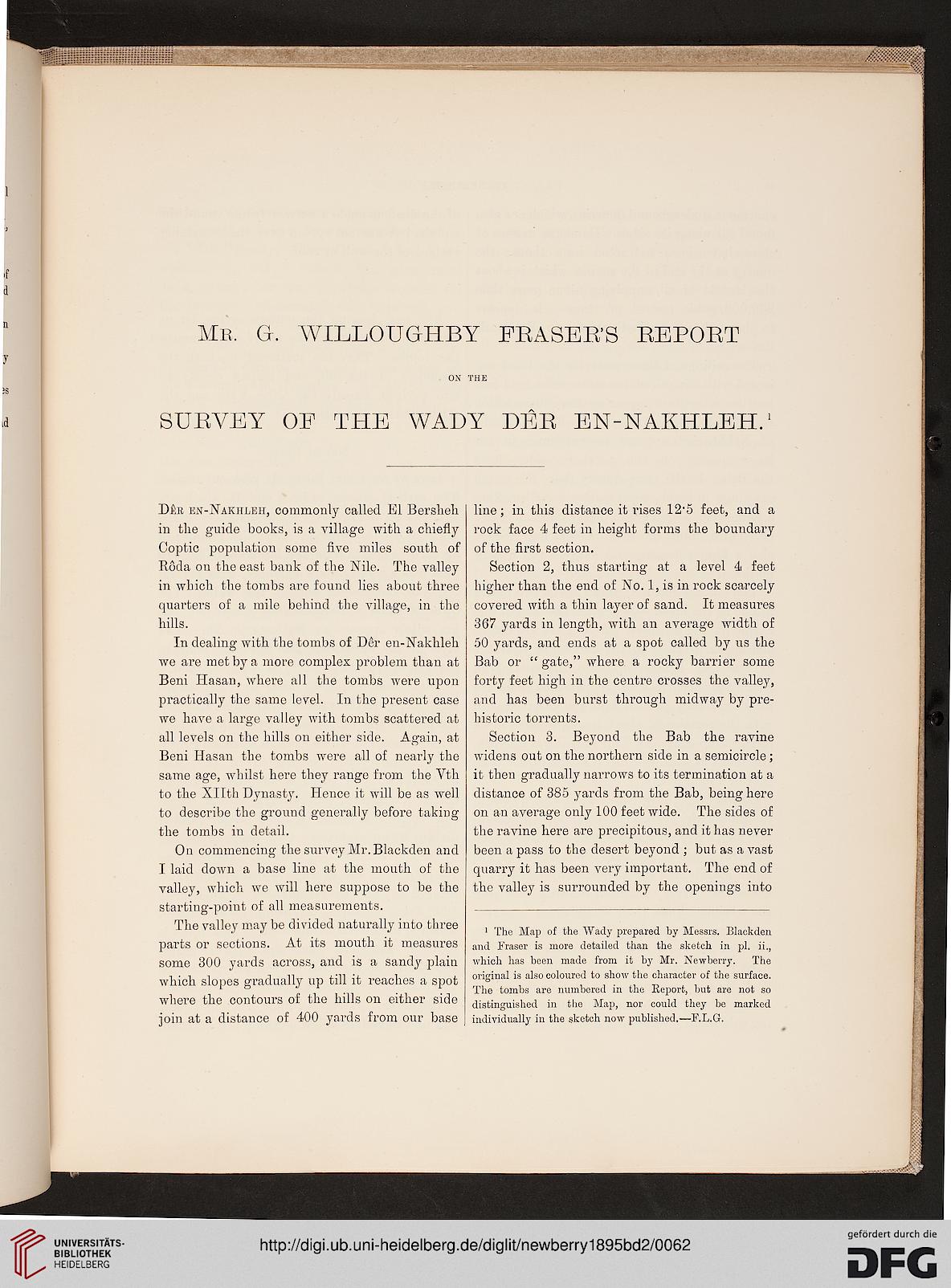 Dkr en-Nakhleh, commonly called El Bersheh
in the guide books, is a village with a chiefly
Coptic population some five miles south of
Roda on the east bank of the Nile. The valley
in which the tombs are found lies about three
quarters of a mile behind the village, in the
hills.

In dealing with the tombs of Der en-Nakhleh
we are met by a more complex problem than at
Beni Hasan, where all the tombs were upon
practically the same level. In the present case
we have a large valley with tombs scattered at
all levels on the hills on either side. Again, at
Beni Hasan the tombs were all of nearly the
same age, whilst here they range from the Vth
to the XHth Dynasty. Hence it will be as well
to describe the ground generally before takiDg
the tombs in detail.

On commencing the survey Mr. Blackden and
I laid down a base line at the mouth of the
valley, which we will here suppose to be the
starting-point of all measurements.

The valley may be divided naturally into three
parts or sections. At its mouth it measures
some 300 yards across, and is a sandy plain
which slopes gradually up till it reaches a spot
where the contours of the hills on either side
join at a distance of 400 yards from our base

line; in this distance it rises 12*5 feet, and a
rock face 4 feet in height forms the boundary
of the first section.

Section 2, thus starting at a level 4 feet
higher than the end of No. 1, is in rock scarcely
covered with a thin layer of sand. It measures
367 yards in length, with an average width of
50 yards, and ends at a spot called by us the
Bab or " gate," where a rocky barrier some
forty feet high in the centre crosses the valley,
and has been burst through midway by pre-
historic torrents.

Section 3. Beyond the Bab the ravine
widens out on the northern side in a semicircle;
it then gradually narrows to its termination at a
distance of 385 yards from the Bab, being here
on an average only 100 feet wide. The sides of
the ravine here are precipitous, and it has never
been a pass to the desert beyond ; but as a vast
quarry it has been very important. The end of
the valley is surrounded by the openings into

1 The Map of the Wady prepared by Messrs. Blackden
and Fraser is more detailed than the sketch in pi. ii.,
which has been made from it by Mr. Newberry. The
original is also coloured to show the character of the surface.
The tombs are numbered in the Eeport, but are not so
distinguished in the Map, nor could they be marked
individually in the sketch now published.—F.L.G.