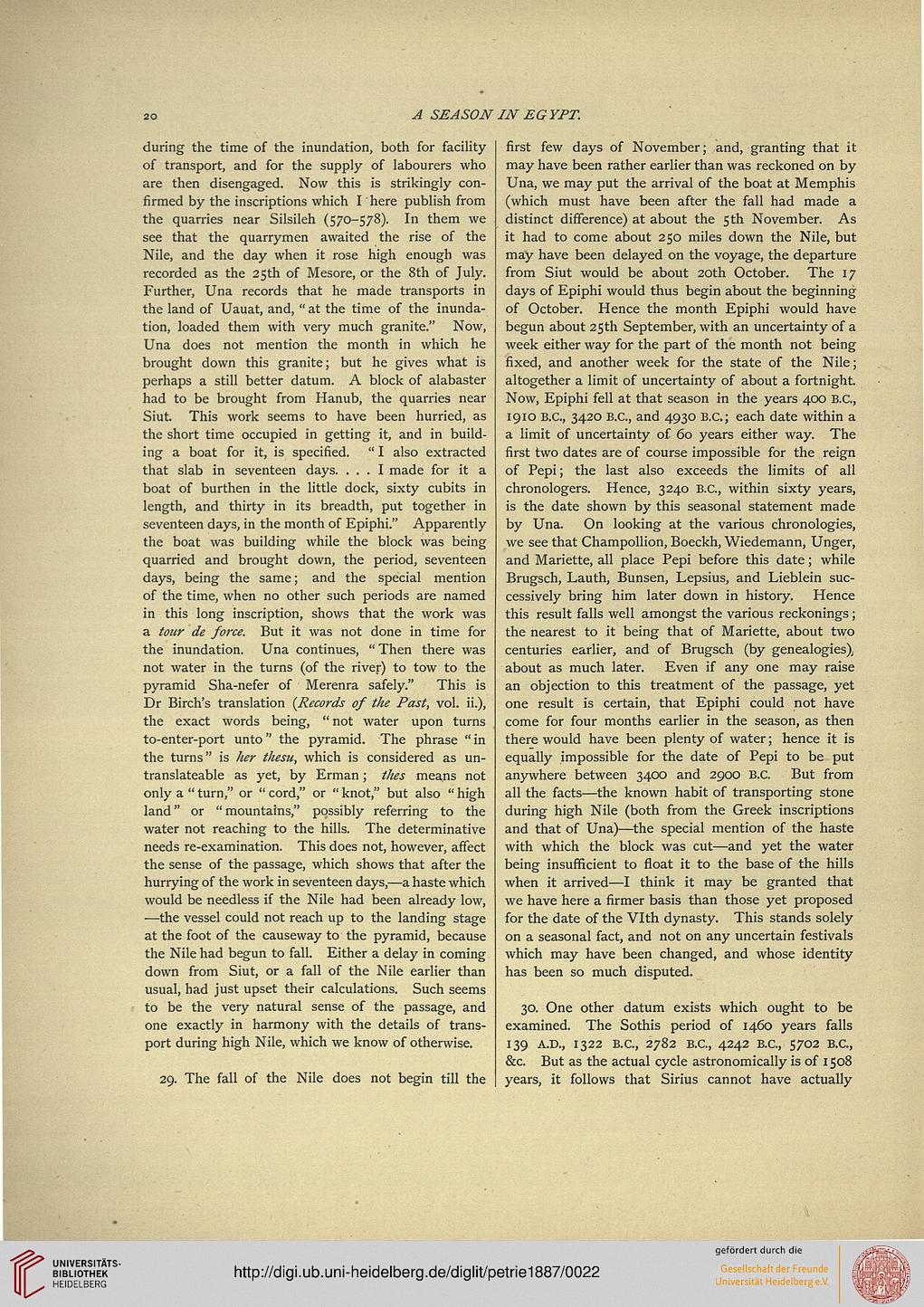 Information about OCR text
A SEASON IN EGYPT.

during the time of the inundation, both for facility
of transport, and for the supply of labourers who
are then disengaged. Now this is strikingly con-
firmed by the inscriptions which I here publish from
the quarries near Silsileh (570-578). In them we
see that the quarrymen awaited the rise of the
Nile, and the day when it rose high enough was
recorded as the 25th of Mesore, or the 8th of July.
Further, Una records that he made transports in
the land of Uauat, and, " at the time of the inunda-
tion, loaded them with very much granite." Now,
Una does not mention the month in which he
brought down this granite; but he gives what is
perhaps a still better datum. A block of alabaster
had to be brought from Hanub, the quarries near
Siut. This work seems to have been hurried, as
the short time occupied in getting it, and in build-
ing a boat for it, is specified. " I also extracted
that slab in seventeen days. ... I made for it a
boat of burthen in the little dock, sixty cubits in
length, and thirty in its breadth, put together in
seventeen days, in the month of Epiphi." Apparently
the boat was building while the block was being
quarried and brought down, the period, seventeen
days, being the same; and the special mention
of the time, when no other such periods are named
in this long inscription, shows that the work was
a tour de force. But it was not done in time for
the inundation. Una continues, "Then there was
not water in the turns (of the river) to tow to the
pyramid Sha-nefer of Merenra safely." This is
Dr Birch's translation {Records of the Past, vol. ii.),
the exact words being, "not water upon turns
to-enter-port unto" the pyramid. The phrase "in
the turns" is her thesu, which is considered as un-
translateable as yet, by Erman; thes means not
only a " turn," or " cord," or " knot," but also " high
land" or "mountains," possibly referring to the
water not reaching to the hills. The determinative
needs re-examination. This does not, however, affect
the sense of the passage, which shows that after the
hurrying of the work in seventeen days,—a haste which
would be needless if the Nile had been already low,
—the vessel could not reach up to the landing stage
at the foot of the causeway to the pyramid, because
the Nile had begun to fall. Either a delay in coming
down from Siut, or a fall of the Nile earlier than
usual, had just upset their calculations. Such seems
to be the very natural sense of the passage, and
one exactly in harmony with the details of trans-
port during high Nile, which we know of otherwise.

29. The fall of the Nile does not begin till the

first few days of November; and, granting that it
may have been rather earlier than was reckoned on by
Una, we may put the arrival of the boat at Memphis
(which must have been after the fall had made a
distinct difference) at about the 5th November. As
it had to come about 250 miles down the Nile, but
may have been delayed on the voyage, the departure
from Siut would be about 20th October. The 17
days of Epiphi would thus begin about the beginning
of October. Hence the month Epiphi would have
begun about 25th September, with an uncertainty of a
week either way for the part of the month not being
fixed, and another week for the state of the Nile;
altogether a limit of uncertainty of about a fortnight.
Now, Epiphi fell at that season in the years 400 B.C.,
1910 B.C., 3420 B.C., and 4930 B.C.; each date within a
a limit of uncertainty of 60 years either way. The
first two dates are of course impossible for the reign
of Pepi; the last also exceeds the limits of all
chronologers. Hence, 3240 B.C., within sixty years,
is the date shown by this seasonal statement made
by Una. On looking at the various chronologies,
we see that Champollion, Boeckh, Wiedemann, Unger,
and Mariette, all place Pepi before this date; while
Brugsch, Lauth, Bunsen, Lepsius, and Lieblein suc-
cessively bring him later down in history. Hence
this result falls well amongst the various reckonings;
the nearest to it being that of Mariette, about two
centuries earlier, and of Brugsch (by genealogies);
about as much later. Even if any one may raise
an objection to this treatment of the passage, yet
one result is certain, that Epiphi could not have
come for four months earlier in the season, as then
there would have been plenty of water; hence it is
equally impossible for the date of Pepi to be put
anywhere between 3400 and 2900 B.C. But from
all the facts—the known habit of transporting stone
during high Nile (both from the Greek inscriptions
and that of Una)—the special mention of the haste
with which the block was cut—and yet the water
being insufficient to float it to the base of the hills
when it arrived—I think it may be granted that
we have here a firmer basis than those yet proposed
for the date of the Vlth dynasty. This stands solely
on a seasonal fact, and not on any uncertain festivals
which may have been changed, and whose identity
has been so much disputed.