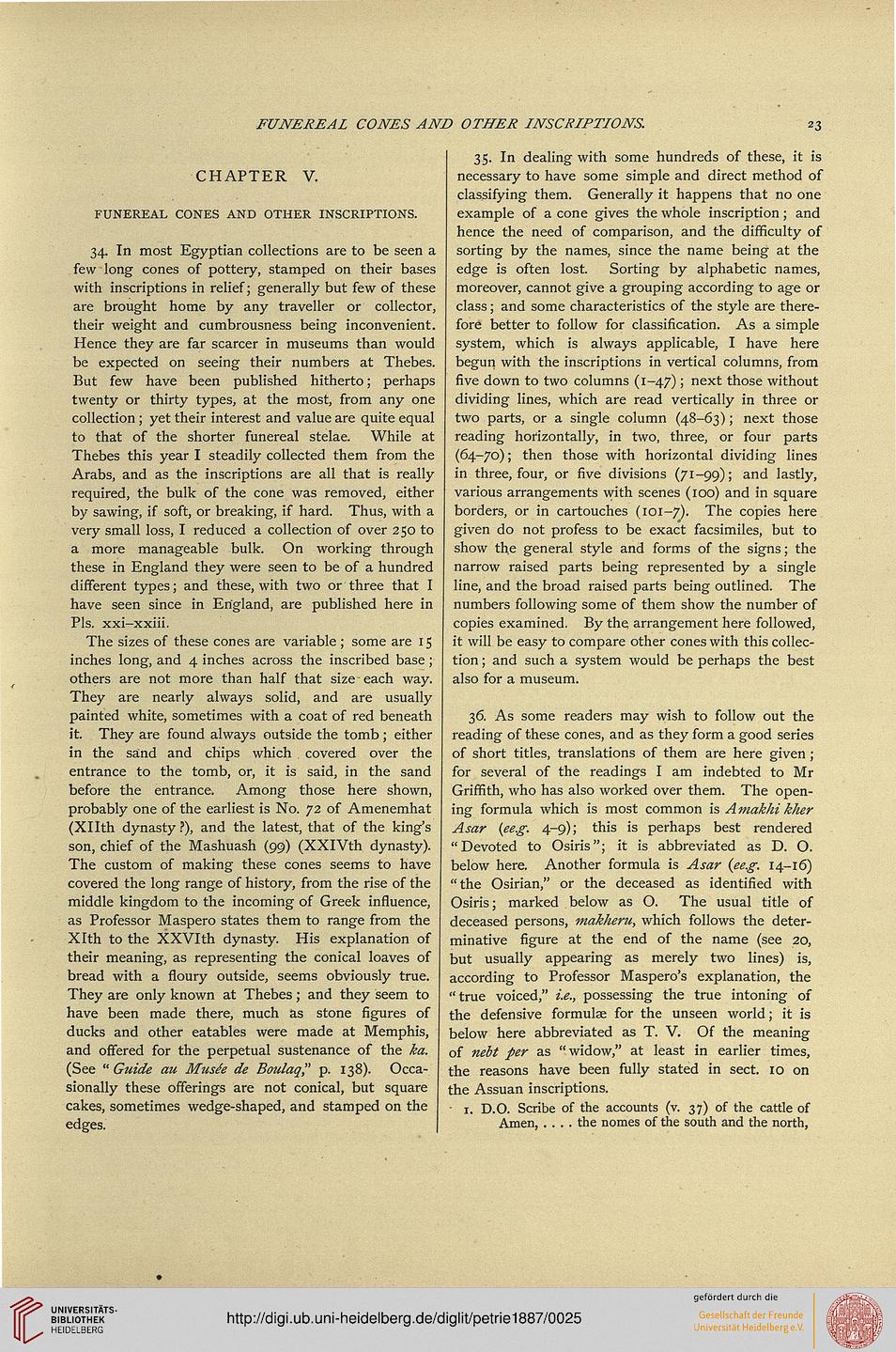 Information about OCR text
FUNEREAL CONES AND OTHER INSCRIPTIONS.

FUNEREAL CONES AND OTHER INSCRIPTIONS.

34. In most Egyptian collections are to be seen a
few long cones of pottery, stamped on their bases
with inscriptions in relief; generally but few of these
are brought home by any traveller or collector,
their weight and cumbrousness being inconvenient.
Hence they are far scarcer in museums than would
be expected on seeing their numbers at Thebes.
But few have been published hitherto; perhaps
twenty or thirty types, at the most, from any one
collection; yet their interest and value are quite equal
to that of the shorter funereal stelae. While at
Thebes this year I steadily collected them from the
Arabs, and as the inscriptions are all that is really
required, the bulk of the cone was removed, either
by sawing, if soft, or breaking, if hard. Thus, with a
very small loss, I reduced a collection of over 250 to
a more manageable bulk. On working through
these in England they were seen to be of a hundred
different types; and these, with two or three that I
have seen since in England, are published here in
Pis. xxi-xxiii.

The sizes of these cones are variable ; some are 15
inches long, and 4 inches across the inscribed base;
others are not more than half that size-each way.
They are nearly always solid, and are usually
painted white, sometimes with a coat of red beneath
it. They are found always outside the tomb; either
in the sand and chips which covered over the
entrance to the tomb, or, it is said, in the sand
before the entrance. Among those here shown,
probably one of the earliest is No. 72 of Amenemhat
(Xllth dynasty ?), and the latest, that of the king's
son, chief of the Mashuash (99) (XXIVth dynasty).
The custom of making these cones seems to have
covered the long range of history, from the rise of the
middle kingdom to the incoming of Greek influence,
as Professor Maspero states them to range from the
Xlth to the XXVIth dynasty. His explanation of
their meaning, as representing the conical loaves of
bread with a floury outside, seems obviously true.
They are only known at Thebes; and they seem to
have been made there, much as stone figures of
ducks and other eatables were made at Memphis,
and offered for the perpetual sustenance of the ka.
(See " Guide au Musie de Boulaq" p. 138). Occa-
sionally these offerings are not conical, but square
cakes, sometimes wedge-shaped, and stamped on the
edges.

35. In dealing with some hundreds of these, it is
necessary to have some simple and direct method of
classifying them. Generally it happens that no one
example of a cone gives the whole inscription; and
hence the need of comparison, and the difficulty of
sorting by the names, since the name being at the
edge is often lost. Sorting by alphabetic names,
moreover, cannot give a grouping according to age or
class; and some characteristics of the style are there-
fore better to follow for classification. As a simple
system, which is always applicable, I have here
begun with the inscriptions in vertical columns, from
five down to two columns (1-47); next those without
dividing lines, which are read vertically in three or
two parts, or a single column (48-63); next those
reading horizontally, in two, three, or four parts
(64-70); then those with horizontal dividing lines
in three, four, or five divisions (71-99); and lastly,
various arrangements with scenes (100) and in square
borders, or in cartouches (101-7). The copies here
given do not profess to be exact facsimiles, but to
show the general style and forms of the signs; the
narrow raised parts being represented by a single
line, and the broad raised parts being outlined. The
numbers following some of them show the number of
copies examined. By the, arrangement here followed,
it will be easy to compare other cones with this collec-
tion ; and such a system would be perhaps the best
also for a museum.

36. As some readers may wish to follow out the
reading of these cones, and as they form a good series
of short titles, translations of them are here given ;
for several of the readings I am indebted to Mr
Griffith, who has also worked over them. The open-
ing formula which is most common is Amakhi kher
Asar {ee.g. 4-9); this is perhaps best rendered
"Devoted to Osiris"; it is abbreviated as D. O.
below here. Another formula is Asar {ee.g. 14-16)
"the Osirian," or the deceased as identified with
Osiris; marked below as O. The usual title of
deceased persons, makheru, which follows the deter-
minative figure at the end of the name (see 20,
but usually appearing as merely two lines) is,
according to Professor Maspero's explanation, the
" true voiced," i.e., possessing the true intoning of
the defensive formulae for the unseen world; it is
below here abbreviated as T. V. Of the meaning
of nebt per as "widow," at least in earlier times,
the reasons have been fully stated in sect. 10 on
the Assuan inscriptions.