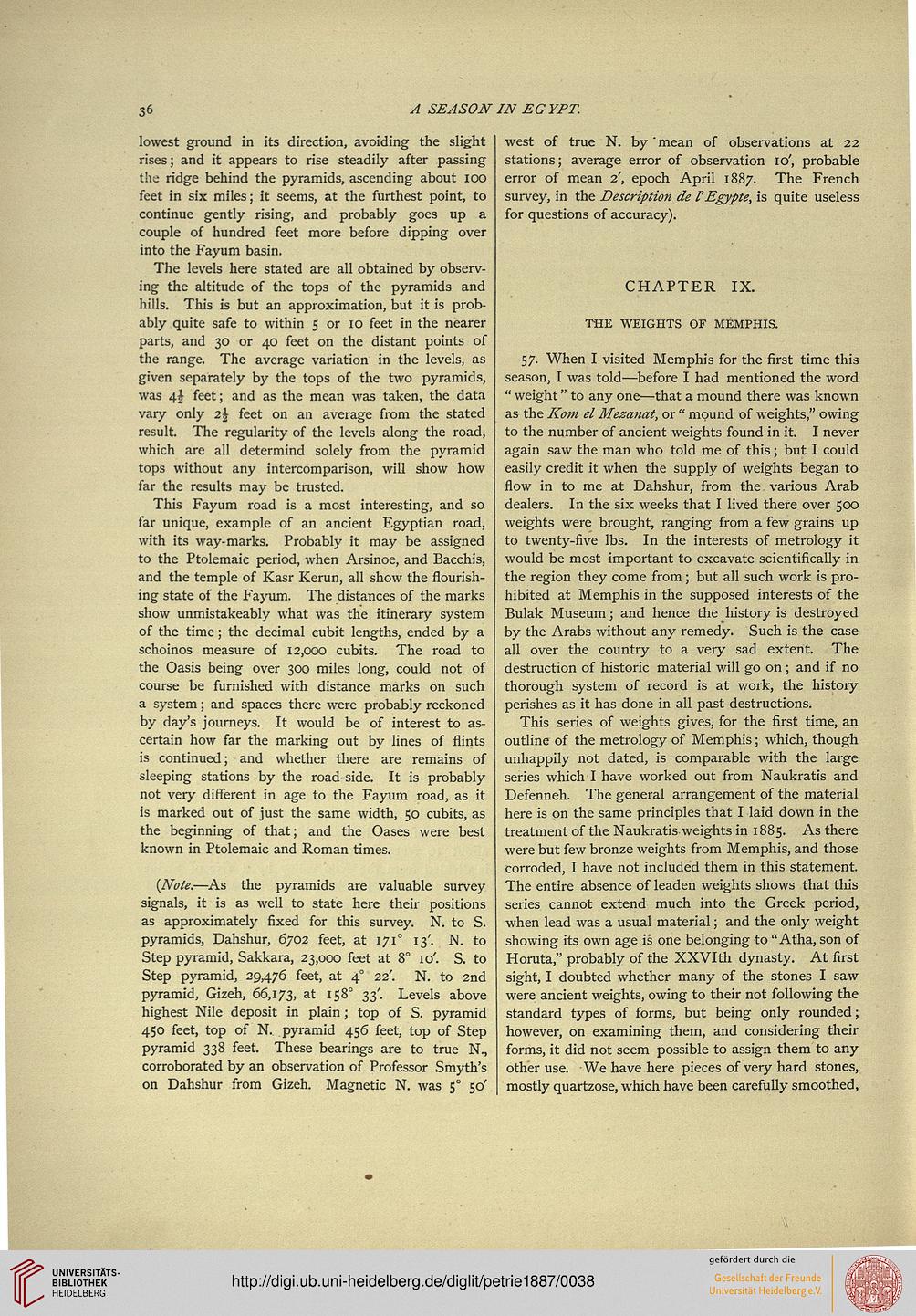 lowest ground in its direction, avoiding the slight
rises; and it appears to rise steadily after passing
the ridge behind the pyramids, ascending about ioo
feet in six miles; it seems, at the furthest point, to
continue gently rising, and probably goes up a
couple of hundred feet more before dipping over
into the Fayum basin.

The levels here stated are all obtained by observ-
ing the altitude of the tops of the pyramids and
hills. This is but an approximation, but it is prob-
ably quite safe to within 5 or 10 feet in the nearer
parts, and 30 or 40 feet on the distant points of
the range. The average variation in the levels, as
given separately by the tops of the two pyramids,
was 4£ feet; and as the mean was taken, the data
vary only 2§ feet on an average from the stated
result. The regularity of the levels along the road,
which are all determind solely from the pyramid
tops without any intercomparison, will show how
far the results may be trusted.

This Fayum road is a most interesting, and so
far unique, example of an ancient Egyptian road,
with its way-marks. Probably it may be assigned
to the Ptolemaic period, when Arsinoe, and Bacchis,
and the temple of Kasr Kerun, all show the flourish-
ing state of the Fayum. The distances of the marks
show unmistakeably what was the itinerary system
of the time; the decimal cubit lengths, ended by a
schoinos measure of 12,000 cubits. The road to
the Oasis being over 300 miles long, could not of
course be furnished with distance marks on such
a system; and spaces there were probably reckoned
by day's journeys. It would be of interest to as-
certain how far the marking out by lines of flints
is continued; and whether there are remains of
sleeping stations by the road-side. It is probably
not very different in age to the Fayum road, as it
is marked out of just the same width, 50 cubits, as
the beginning of that; and the Oases were best
known in Ptolemaic and Roman times.

west of true N. by' mean of observations at 22
stations; average error of observation 10', probable
error of mean 2', epoch April 1887. The French
survey, in the Description de FEgypte, is quite useless
for questions of accuracy).

THE WEIGHTS OF MEMPHIS.

57. When I visited Memphis for the first time this
season, I was told—before I had mentioned the word
" weight" to any one—that a mound there was known
as the Kom el Mezajiat, or " mound of weights," owing
to the number of ancient weights found in it. I never
again saw the man who told me of this; but I could
easily credit it when the supply of weights began to
flow in to me at Dahshur, from the. various Arab
dealers. In the six weeks that I lived there over 500
weights were brought, ranging from a few grains up
to twenty-five lbs. In the interests of metrology it
would be most important to excavate scientifically in
the region they come from; but all such work is pro-
hibited at Memphis in the supposed interests of the
Bulak Museum; and hence the history is destroyed
by the Arabs without any remedy. Such is the case
all over the country to a very sad extent. The
destruction of historic material will go on ; and if no
thorough system of record is at work, the history
perishes as it has done in all past destructions.

This series of weights gives, for the first time, an
outline of the metrology of Memphis; which, though
unhappily not dated, is comparable with the large
series which I have worked out from Naukratis and
Defenneh. The general arrangement of the material
here is on the same principles that I laid down in the
treatment of the Naukratis weights in 1885. As there
were but few bronze weights from Memphis, and those
corroded, I have not included them in this statement.
The entire absence of leaden weights shows that this
series cannot extend much into the Greek period,
when lead was a usual material; and the only weight
showing its own age is one belonging to "Atha, son of
Horuta," probably of the XXVIth dynasty. At first
sight, I doubted whether many of the stones I saw
were ancient weights, owing to their not following the
standard types of forms, but being only rounded;
however, on examining them, and considering their
forms, it did not seem possible to assign them to any
other use. We have here pieces of very hard stones,
mostly quartzose, which have been carefully smoothed,