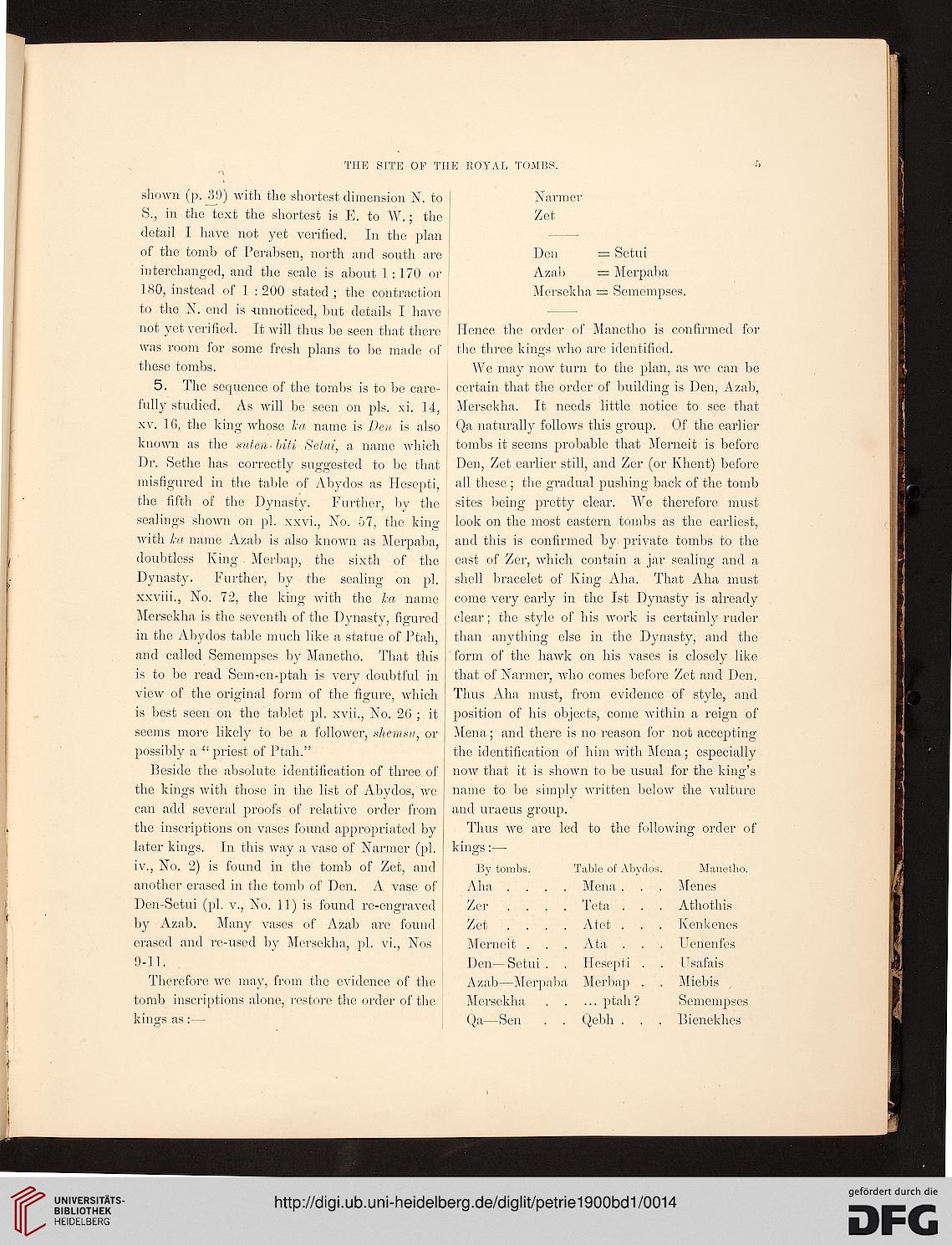 Information about OCR text
THE SITE OP THE EOYAL TOMBS.

shown (p. 39) with the shortest dimension N. to
S., in the text the shortest is E. to W.; the
detail I have not yet verified. In the plan
of the tomb of Perabsen, north and south are
interchanged, and the scale is about 1:170 or
180, instead of 1 : 200 stated; the contraction
to the N. end is unnoticed, but details I have
not yet verified. It will thus be seen that there
was room for some fresh plans to be made of
these tombs.

5. The sequence of the tombs is to be care-
fully studied. As will be seen on pis. xi. 14,
xv. 16, the king whose Jca name is Den is also
known as the suten*biti 8etui, a name which

Hence the order of Manetho is confirmed for
the three kings who are identified.

We may now turn to the plan, as we can be
certain that the order of building is Den, Azab,
Mersekha. It needs little notice to see that
Qa naturally follows this group. Of the earlier
tombs it seems probable that Merneit is before
Dr. Sethe has correctly suggested to be that Den, Zet earlier still, and Zer (or Khent) before
misfigured in the table of Abyclos as Hesepti, all these ; the gradual pushing back of the tomb
the fifth of the Dynasty. Further, by the , sites being pretty clear. We therefore must
sealings shown on pi. xxvi., No. -57, the kino- look on the most eastern tombs as the earliest,
with Jca name Azab is also known as Merpaba, '[ and this is confirmed by private tombs to the

doubtless King Merbap, the sixth
Dynasty. Further, by the

xxviii., No. 72, the king with the Jca name
Mersekha is the seventh of the Dynasty, figured
in the Abydos table much like a statue of Ptah,
and called Semempses by Manetho. That this
is to be read Sem-en-ptah is very doubtful in
vieAV of the original form of the figure, which
is best seen on the tablet pi. xvii., No. 2G ; it
seems more likely to be a follower, shemsu, or
possibly a ': priest of Ptah."

Beside the absolute identification of three of
the kings with those in the list of Abydos, we
can add several proofs of relative order from
the inscriptions on vases found appmpriated by
later kings. In this way a vase of Narmer (pi.
iv., No. 2) is found in the tomb of Zet, and
another erased in the tomb of Den. A vase of
Den-Setui (pi. v., No. 11) is found re-engraved
by Azab. Many vases of Azab arc found
erased and re-used by Mersekha, pi. vi., Nos
9-11.

Therefore we may, from the evidence of the
tomb inscriptions alone, restore the order of the
kings as:—

east of Zer, Avhich contain a jar sealing and a
shell bracelet of King Aha. That Aha must
come very early in the 1st Dynasty is already
clear; the style of his work is certainly ruder
than anything else in the Dynasty, and the
form of the hawk on his vases is closely like
that of Narmer, who comes before Zet and Den.
Thus Aha must, from evidence of style, and
position of his objects, come Avithin a reign of
Mena; and there is no reason for not accepting
the identification of him Avith Mena ; especially
noAV that it is shoAvn to be usual for the king's
name to be simply Avritten beloAv the vulture
and uraeus group.

Thus Ave are led to the folloAving order of
kings:—■