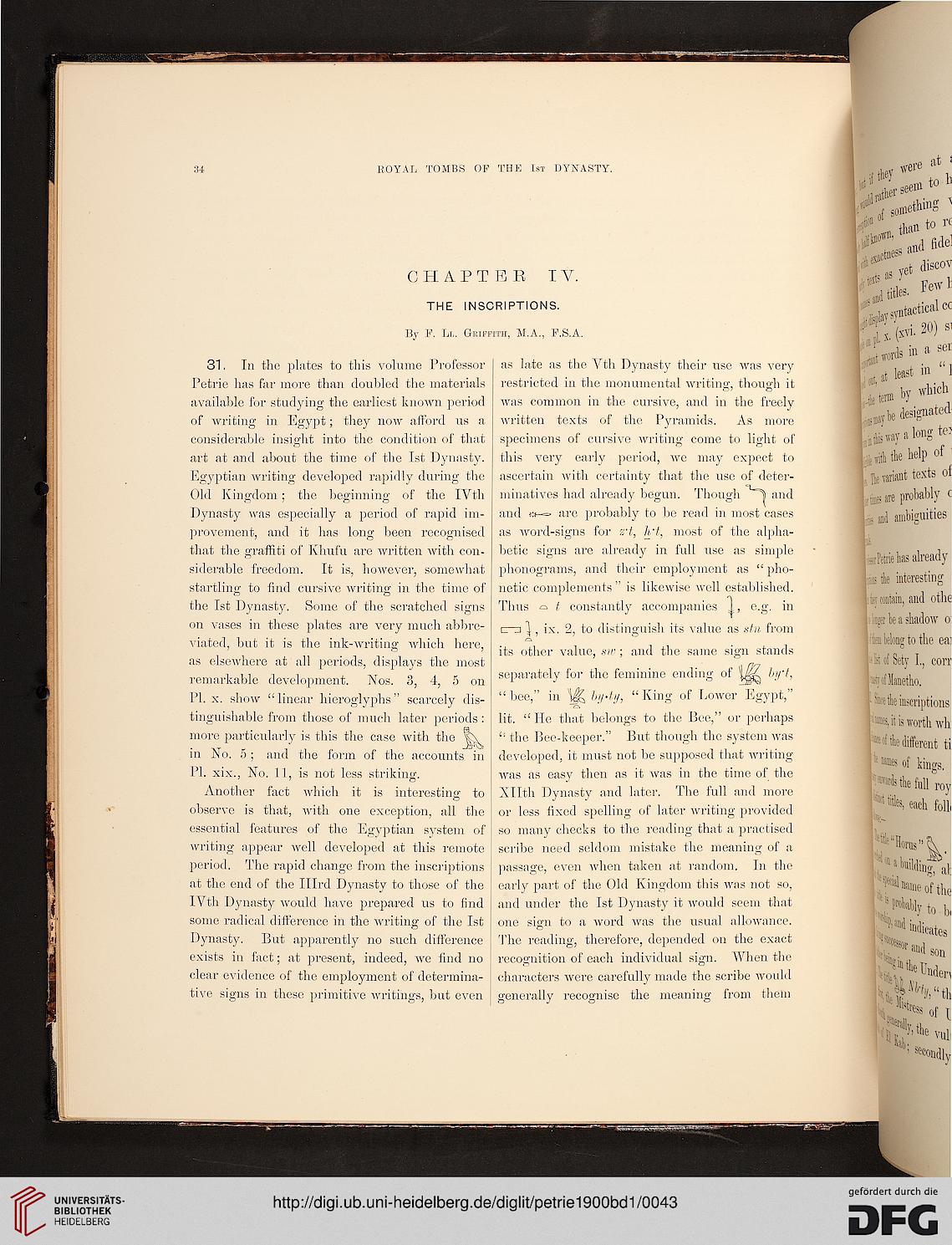 ROYAL TOMBS OF THE 1st DYNASTY.

31. In the plates to this volume Professor
Petrie has far more than doubled the materials
available for studying the earliest known period
of writing in Egypt; they now afford us a
considerable insight into the condition of that
art at and about the time of the 1st Dynasty.
Egyptian writing developed rapidly during the
Old Kingdom; the beginning of the IVth
Dynasty was especially a period of rapid im-
provement, and it lias long been recognised
that the graffiti of Khufu are written Avith con-
siderable freedom. It is, however, somewhat
startling; to find cursive writing in the time of
the 1st Dynasty. Some of the scratched signs
on vases in these plates are very much abbre-
viated, but it is the ink-writing which here,
as elseAvhere at all periods, displays the most
remarkable development. Nos. 3, 4, 5 on
PI. x. show " linear hieroglyphs" scarcely dis-
tinguishable from those of much later periods :
more particularly is this the case with the f\
in No. 5 ; and the form of the accounts in
PI. xix., No. 11, is not less striking.

Another fact which it is interesting to
observe is that, with one exception, all the
essential features of the Egyptian system of
writing appear well developed at this remote
period. The rapid change from the inscriptions
at the end of the Illrd Dynasty to those of the
IVth Dynasty would have prepared us to find
some radical difference in the writing of the 1st
Dynasty. But apparently no such difference
exists in fact; at present, indeed, we find no
clear evidence of the employment of determina-
tive signs in these primitive writings, but even

as late as the Vth Dynasty their use was very
restricted in the monumental writing, though it
was common in the cursive, and in the freely
written texts of the Pyramids. As more
specimens of cursive writing come to light of
this very early period, Ave may expect to
ascertain Avith certainty that the use of deter-
minatives had already begun. Though ^"1 and
and **-=> are probably to be read in most cases
as Avord-signs for z't, h't, most of the alpha-
betic signs are already in full use as simple
phonograms, and their employment as " pho-
netic complements " is likewise well established.

Thus ^ / constantly accompanies
cr-=i ^ , ix. 2, to distinguish its value as stn from
its other value, sw ; and the same sign stands
separately for the feminine ending of m£ by't,
"bee," in \J^ by4y, "King of Lower Egypt,"
lit. "He that belongs to the Bee," or perhaps
'•' the Bee-keeper." But though the system was
developed, it must not be supposed that writing
was as easy then as it was in the time of the
Xllth Dynasty and later. The full and more
or less fixed spelling of later writing provided
so many checks to the reading that a practised
scribe need seldom mistake the meaning of a
passage, even Avhen taken at random. In the
early part of the Old Kingdom this was not so,
and under the 1st Dynasty it would seem that
one sign to a word Avas the usual allowance.

The reading, therefore, depended on the exact
recognition of each individual sign. When the
characters were carefully made the scribe would
generally recognise the meaning from thein

*il the help of
He variant texts of

ies are probably c
i and ambiguities

■v the interesting
tain, and othe
be a shadow o:

lb belong to the eai

inscriptions
■a, it is worth wh
Sof the different ti
-f nmfis of kings,
^ards the M roy
" titles, each foil,