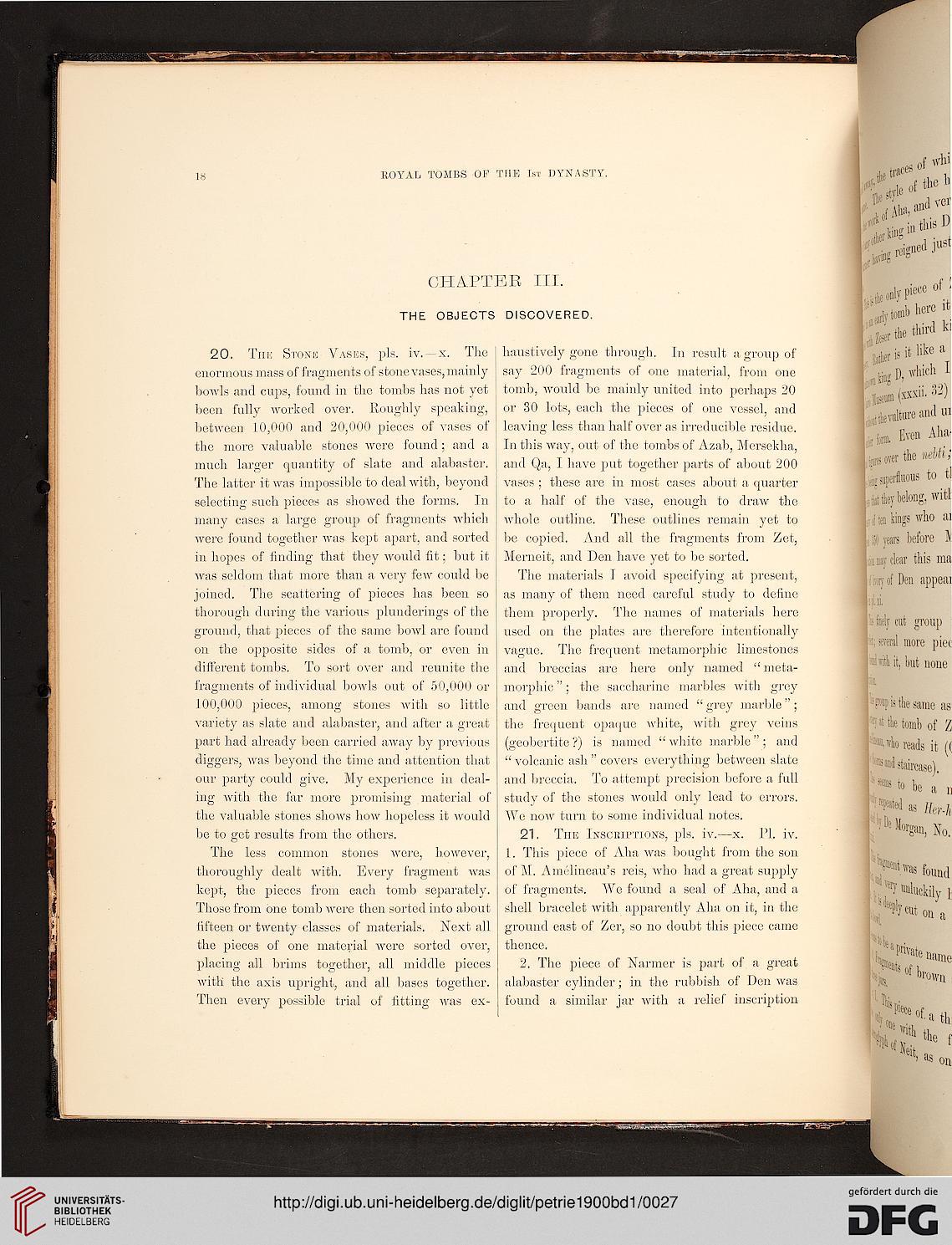 ROYAL TOMBS OF THE 1st DYNASTY.

20. Tiim Stone Vases, pis. iv. -x. The
enormous mass of fragments of stone vases, mainly
bowls and cups, found in the tombs has not yet
been fully worked over. Roughly speaking,
between 10,000 and 20,000 pieces of vases of
the more valuable stones were found; and a
much larger quantity of slate and alabaster.
The latter it was impossible to deal with, beyond
selecting such pieces as showed the forms. In
many cases a large group of fragments which
were found together was kept apart, and sorted
in hopes of finding that they would fit; but it
was seldom that more than a very few could be
joined. The scattering of pieces has been so
thorough during the various plundering^ of the
ground, that pieces of the same bowl are found
on the opposite sides of a tomb, or even in
different tombs. To sort over and reunite the
fragments of individual bowls out of 50,000 or

variety as slate and alabaster, and after a great
part had already been carried away by previous
diggers, was beyond the time and attention that
our party could give. My experience in deal-
ing Avith the far more promising material of
the valuable stones sIioavs how hopeless it Avould
be to get results from the others.

The less common stones Avere, hoAvcATer,
thoroughly dealt Avith. Every fragment Avas
kept, the pieces from each tomb separately.
Those from one tomb Avere then sorted into about
fifteen or twenty classes of materials. Next all
the pieces of one material Avere sorted over,
placing all brims together, all middle pieces
Avitli the axis upright, and all bases together.
Then every possible trial of fitting Avas ex-

haustively gone through. In result a group of
say 200 fragments of one material, from one
tomb, would be mainly united into perhaps 20
or 30 lots, each the pieces of one vessel, and
leaving less than half over as irreducible residue.
In this Avay, out of the tombs of Azab, Mersekha,
and Qa, I have put together parts of about 200
vases ; these are in most cases about a quarter
to a half of the vase, enough to draw the
Avhole outline. These outlines remain yet to
be copied. And all the fragments from Zet,
Merneit, and Den have yet to be sorted.

The materials I avoid specifying at present,
as many of them need careful study to define
them properly. The names of materials here
used on the plates are therefore intentionally
vague. The frequent metamorphic limestones
and breccias are here only named " meta-
morphic "; the saccharine marbles Avith grey
and green bands are named " grey marble" :
the frequent opaque Avhite, with grey A^eins
(geobertite ?) is named " white marble " ; and
" volcanic ash " covers everything between slate
and breccia. To attempt precision before a full
study of the stones Avould only lead to errors.
We noAv turn to some individual notes.

21. The Inscriptions, pis. iv.—x. PI. iv.
1. This piece of Aha Avas bought from the son
of M. Amelineau's reis, avIio had a great supply
of fragments. We found a seal of Aha, and a
shell bracelet with apparently Aha on it, in the
ground east of Zer, so no doubt this piece came
thence.

2. The piece of Narmer is part of a great
alabaster cylinder; in the rubbish of Den was
found a similar jar with a relief inscription

rvlc of ^ b
The style

^ rlY tomb here it
jr the third to

cut group
ral more piec
Ik it, but none

■iroup is the same as
the tomb of Z
to reads it ((
Staircase).