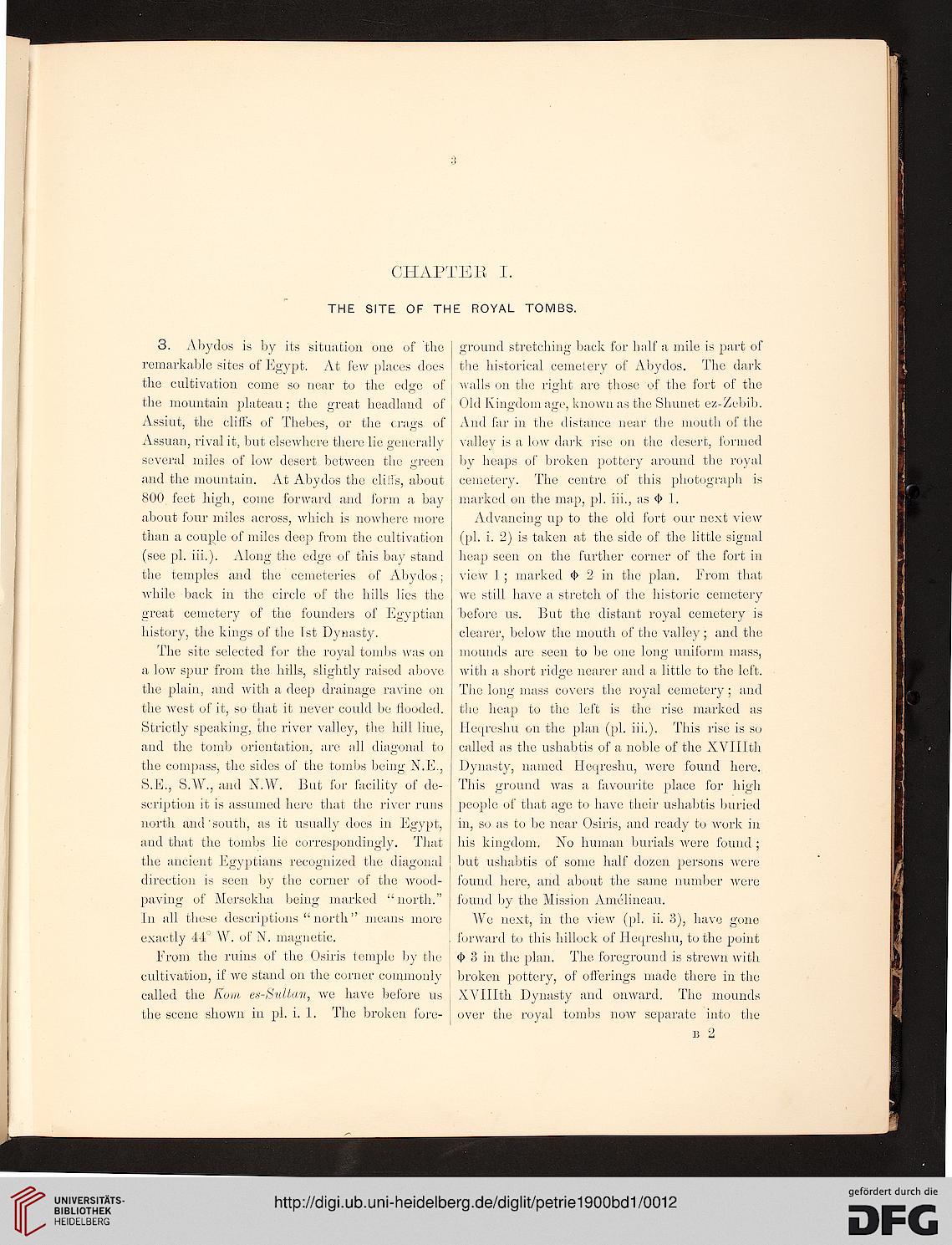 Information about OCR text
CHAPTER I.

THE SITE OF THE ROYAL TOMBS.

3. Abydos is by its situation one of 'the
remarkable sites of Egypt. At few places docs
the cultivation come so near to the edge of
the mountain plateau; the great headland of
Assiut, the cliffs of Thebes, or the crags of
Assuan, rival it, but elsewhere there lie generally
several miles of low desert between the green
and the mountain. At Abydos the cliffs, about
800 feet high, come forward and form a bay
about four miles across, which is nowhere more
than a couple of miles deep from the cultivation
(see pi. iii.). Along the edge of this bay stand
the temples and the cemeteries of Abydos;
while back in the circle of the hills lies the
great cemetery of the founders of Egyptian
history, the kings of the 1st Dynasty.

The site selected for the royal tombs was on
a low spur from the hills, slightly raised above
the plain, and with a deep drainage ravine on
the west of it, so that it never could be flooded.
Strictly speaking, the river valley, the hill line,
and the tomb orientation, are all diagonal to
the compass, the sides of the tombs being N.E.,
S.E., S.W., and N.W. But for facility of de-
scription it is assumed here that the river runs
north and'south, as it usually does in Egypt,
and that the tombs lie correspondingly. That
the ancient Egyptians recognized the diagonal
direction is seen by the corner of the wood-
paving of Mersekha being marked "north."
In all those descriptions " north" means more
exactly 44° W. of N". magnetic.

From the ruins of the Osiris temple by the
cultivation, if we stand on the corner commonly
called the Kom es-Sultan, we have before us
the scene shown in pi. i. 1. The broken fore-

ground stretching back for half a mile is part of
the historical cemetery of Abydos. The dark
Avails on the right are those of the fort of the
Old Kingdom age, known as the Shunet ez-Zcbib.
And far in the distance near the mouth of the
valley is a low dark rise on the desert, formed
by heaps of broken pottery around the royal
cemetery. The centre of this photograph is
marked on the map, pi. iii., as <!> 1.

Advancing up to the old fort our next view
(pi. i. 2) is taken at the side of the little signal
heap seen on the further corner of the fort in
view 1 ; marked <t> 2 in the plan. From that
we still have a stretch of the historic cemetery
before us. But the distant royal cemetery is
clearer, below the mouth of the valley ; and the
mounds are seen to be one long uniform mass,
with a short ridge nearer and a little to the left.
The long mass covers the royal cemetery; and
the heap to the left is the rise marked as
Heqreshu on the plan (pi. iii.). This rise is so
called as the ushabtis of a noble of the XVIIIth
Dynasty, named Heqreshu, were found here.
This ground was a favourite place for high
people of that age to have their ushabtis buried
in, so as to be near Osiris, and ready to work in
his kingdom. No human burials were found ;
but ushabtis of some half dozen persons were
found here, and about the same number were
found by the Mission Amelineau.

We next, in the view (pi. ii. 3), have gone
forward to this hillock of Heqreshu, to the point
<!> 3 in the plan. The foreground is strewn with
broken pottery, of offerings made there in the
XVIIIth Dynasty and onward. The mounds
over the royal tombs now separate into the