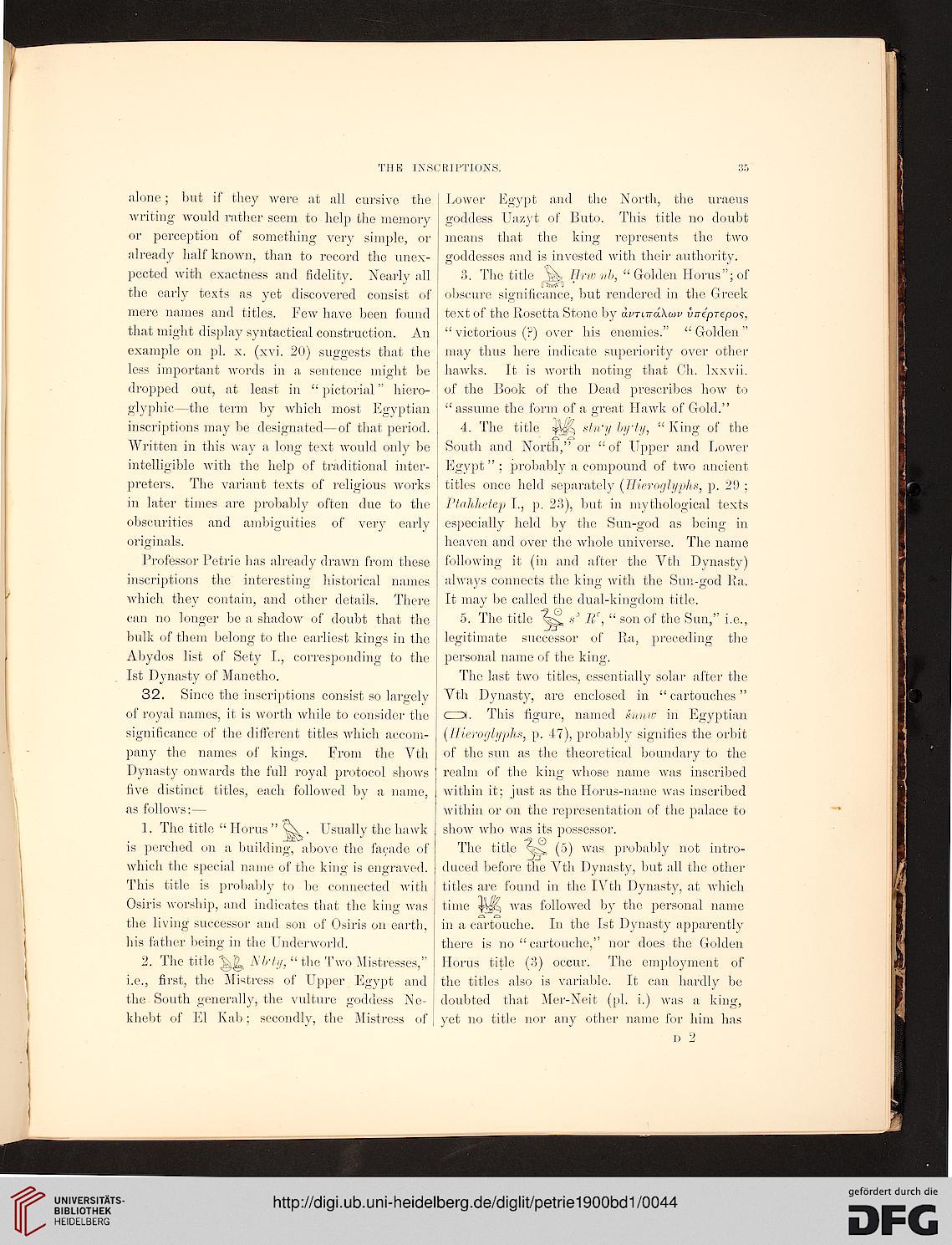 Information about OCR text
THE INSCRIPTIONS.

alone ; but if they were at all cursive the
writing would rather seem to help the memory
or perception of something very simple, or
already half known, than to record the unex-
pected with exactness and fidelity. Nearly all
the early texts as yet discovered consist of
mere names and titles. Few have been found
that might display syntactical construction. An
example on pi. x. (xvi. 20) suggests that the
less important words in a sentence might be
dropped out, at least in " pictorial" hiero-
glyphic—the term by which most Egyptian
inscriptions may be designated—of that period.
Written in this way a long text would only be
intelligible with the help of traditional inter-
preters. The variant texts of religious works
in later times are probably often due to the
obscurities and ambiguities of very early
originals.

Professor Petrie has already drawn from these
inscriptions the interesting historical names
which they contain, and other details. There
can no longer be a shadow of doubt that the
bulk of them belong to the earliest kings in the
Abydos list of Sety I., corresponding to the
1st Dynasty of Manetho.

32, Since the inscriptions consist so largely
of royal names, it is worth Avhile to consider the
significance of the different titles which accom-
pany the names of kings. From the Vth
Dynasty omvards the full royal protocol shows
five distinct titles, each followed by a name,
as follows:—

1. The title " Horus " ^. Usually the hawk
is perched on a building, above the facade of
which the special name of the king is engraved.
This title is probably to be connected witli
Osiris Avorship, and indicates that the king was
the living successor and son of Osiris on earth,
his father being in the Underworld.

2. The title ^ Nfrty, " the Two Mistresses,"
i.e., first, the Mistress of Upper Egypt and
the South generally, the vulture goddess Ne-
khebt of El Kab; secondly, the Mistress of

Lower Egypt and the North, the uraeus
goddess Uazyt of Buto. This title no doubt
means that the king represents the two
goddesses and is invested with their authority.

3. The title $j^ Erw nb, " Golden Horus"; of
obscure significance, but rendered in the Greek
text of the Rosetta Stone by avTLirdkwv vnepTtpos,
" victorious (?) over his enemies." " Golden "
may thus here indicate superiority over other
hawks. It is worth noting that Ch. lxxvii.
of the Book of the Dead prescribes how to
" assume the form of a great Hawk of Gold."

4. The title =j^ stn'y byty, " King of the
South and North," or "of Upper and Lower
Egypt " ; probably a compound of two ancient
titles once held separately [Hieroglyphs, p. 29 ;
Ptahhetep I., p. 23), but in mythological texts
especially held by the Sun-god as being in
heaven and over the whole universe. The name
following it (in and after the Vth Dynasty)
always connects the king with the Sun-god Ra.
It may be called the dual-kingdom title.

legitimate successor of Ra, preceding the
personal name of the king.

The last two titles, essentially solar after the
Vth Dynasty, are enclosed in " cartouches"
czz*. This figure, named snniv in Egyptian
(Hieroglyphs, p. 47), probably signifies the orbit
of the sun as the theoretical boundary to the
realm of the king whose name was inscribed
within it; just as the Horus-name was inscribed
within or on the representation of the palace to
show who was its possessor.

The title ^^ (5) was probably not intro-
duced before the Vth Dynasty, but all the other
titles are found in the IVth Dynasty, at which
time 4^ was followed by the personal name
in a cartouche. In the 1st Dynasty apparently
there is no " cartouche," nor does the Golden
Horus title (3) occur. The employment of
the titles also is variable. It can hardly be
doubted that Mer-Neit (pi. i.) was a king,
yet no title nor any other name for him has