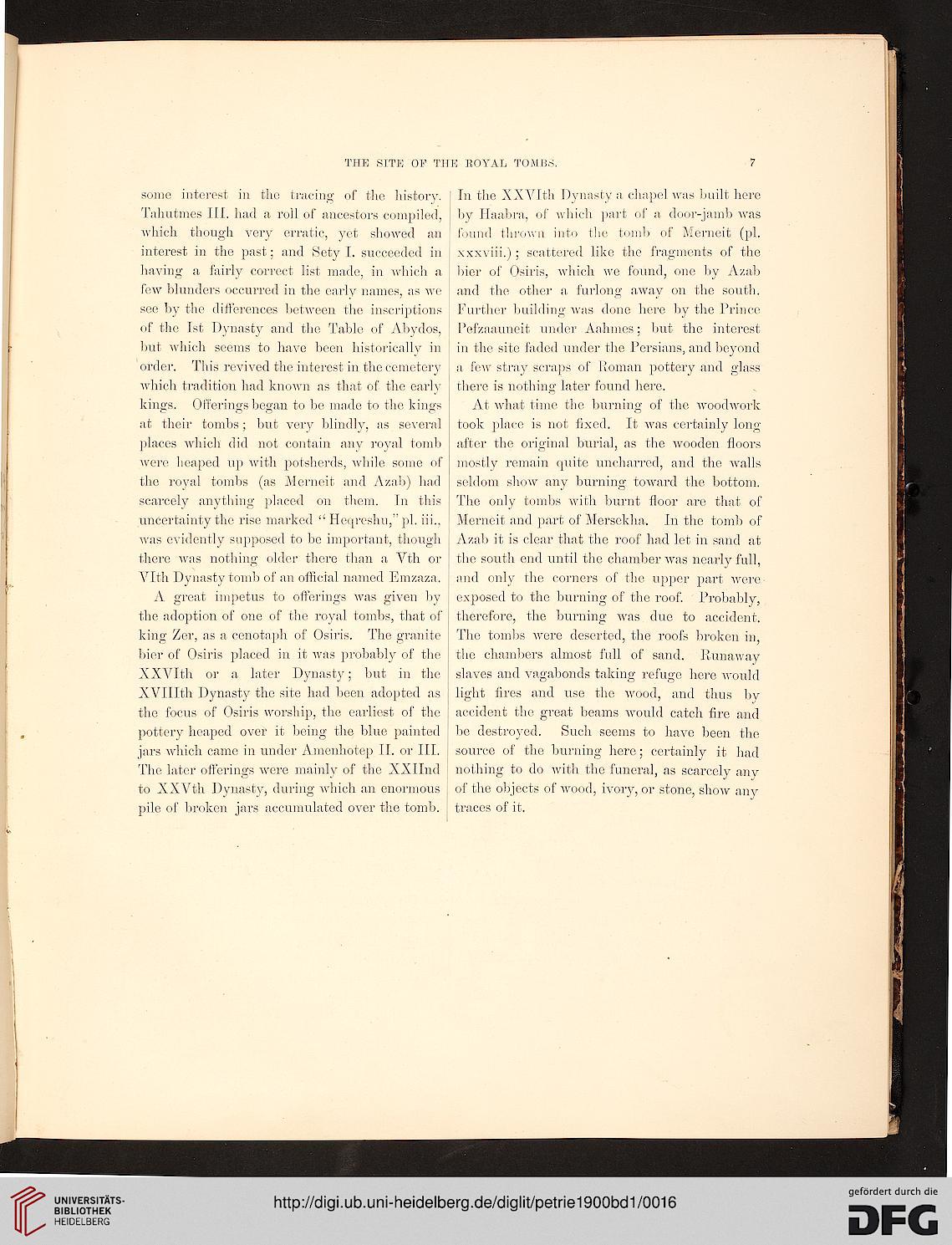 Information about OCR text
THE SITE OF TEE EOTAL TOMBS.

some interest in the tracing of the history.
Tahutmes III. had a roll of ancestors compiled,
which though very erratic, yet showed an
interest in the past; and Sety I. succeeded in
having a fairly correct list made, in which a
few blunders occurred in the early names, as we
see by the differences between the inscriptions
of the 1st Dynasty and the Table of Abydos,
but which seems to have been historically in
order. This revived the interest in the cemetery
which tradition had known as that of the early

Offerings be^an to be made to the kino's

at their tombs; but very blindly, as several
places which did not contain any royal tomb
were heaped up with potsherds, while some of
the royal tombs (as Merneit and Azab) had
scarcely anything placed on them. Tn this
uncertainty the rise marked " Hcqreshu,"pl. iii..
was evidently supposed to be important, though
there was nothing older there than a Vth or
Vlth Dynasty tomb of an official named Emzaza.
A great impetus to offerings was given by
the adoption of one of the royal tombs, that of
king Zer, as a cenotaph of Osiris. The granite
bier of Osiris placed in it was probably of the
XXVIth or a later Dynasty; but in the
XVIIIth Dynasty the site had been adopted as
the focus of Osiris worship, the earliest of the
pottery heaped over it being the blue painted
jars which came in under Amenhotep II. or III.
The later offerings were mainly of the XXIInd
to XXVth Dynasty, during which an enormous
pile of broken jars accumulated over the tomb.

In the XXVIth Dynasty a chapel was built here
by Haabra, of which part of a door-jamb was
found thrown into the tomb of Merneit (pi.
xxxviii.) ; scattered like the fragments of the
bier of Osiris, which we found, one by Azab
and the other a furlong away on the south.
Further building was done here by the Prince
Pefzaauneit under Aahmes; but the interest
in the site faded under the Persians, and beyond
a few stray scraps of Roman pottery and glass
there is nothing later found here.

At what time the burning of the woodwork
took place is not fixed. It was certainly long-
after the original burial, as the wooden floors
mostly remain quite uncharred, and the walls
seldom show anv burning toward the bottom.
The only tombs with burnt floor arc that of
Merneit and part of Mersekha. In the tomb of
Azab it is clear that the roof had let in sand at
the south end until the chamber was nearly full,
and only the corners of the upper part were
exposed to the burning of the roof. Probably,
therefore, the burning was due to accident.
The tombs were deserted, the roofs broken in,
the chambers almost full of sand. Runaway
slaves and vagabonds taking refuge here would
light fires and use the wood, and thus bv
accident the great beams would catch fire and
be destroyed. Such seems to have been the
source of the burning here; certainly it had
nothing to do with the funeral, as scarcely any
of the objects of wood, ivory, or stone, show any
traces of it.