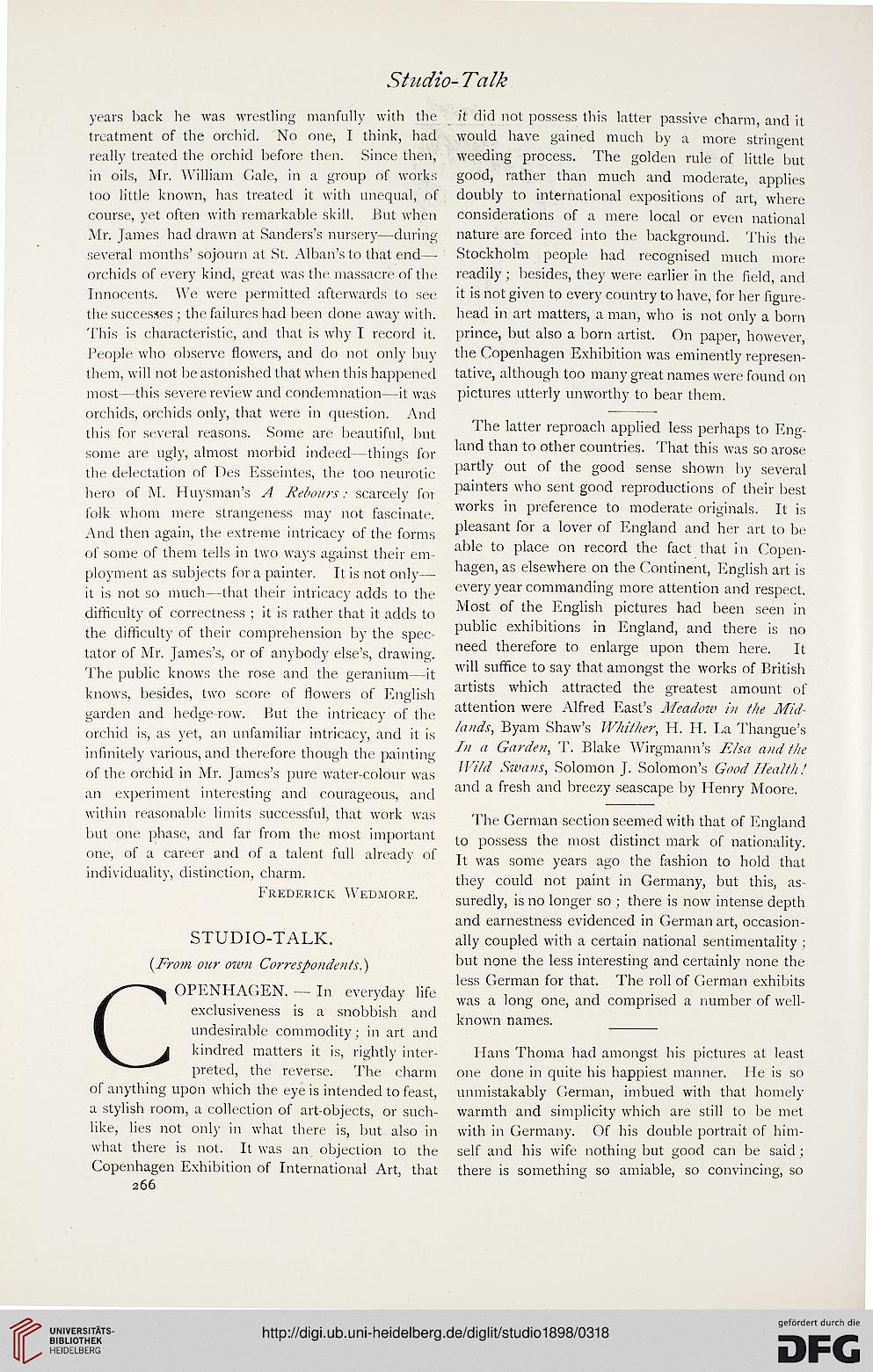 years back he was wrestling manfully with the it did not possess this latter passive charm, and it

treatment of the orchid. No one, I think, had would have gained much by a more stringent

really treated the orchid before then. Since then, weeding process. The golden rule of little but

in oils, Mr. William Gale, in a group of works good, rather than much and moderate, applies

too little known, has treated it with unequal, of doubly to international expositions of art, where

course, yet often with remarkable skill. But when considerations of a mere local or even national

Mr. James had drawn at Sanders's nursery—during nature are forced into the background. This the

several months' sojourn at St. Alban's to that end— Stockholm people had recognised much more

orchids of every kind, great was the massacre of the readily ; besides, they were earlier in the field, and

Innocents. We were permitted afterwards to sec it is not given to every country to have, for her figure-

the successes ; the failures had been done away with. head in art matters, a man, who is not only a born

This is characteristic, and that is why I record it. prince, but also a born artist. On paper, however,

People who observe flowers, and do not only buy the Copenhagen Exhibition was eminently represen-

them, will not be astonished that when this happened tative, although too many great names were found on

most—this severe review and condemnation—it was pictures utterly unworthy to bear them,
orchids, orchids only, that were in question. And

this for several reasons. Some are beautiful, but The latter reProach aPPlied less PerhaPs to Eng"

some are ugly, almost morbid indeed-things for land than tn 0ther c™»^s- Th^ this was so arose

the delectation of Des Esseintes, the too neurotic Partl? out of the Sood sense shown b? several

hero of M. Huysman's A Rebours: scarcely for Pamters who Sent Sond ^productions of their best

folk whom mere strangeness may not fascinate. WOrks in Prefere"ce ^ moderate originals. It is

And then again, the extreme intricacy of the forms Pleasant for a lover °f En§land and her art to be

ployment as subjects for a painter. It is not only- haSen' as ^where on the Continent, English art is

it is not so much-that their intricacy adds to the ever>7 ^ar commanding more attention and respect.

difficulty of correctness ; it is rather that it adds to Mo£* of the. EnSllsh Plctures had been see" in

the difficulty of their comprehension by the spec- v 5 '

1 he public knows the rose and the geranium—it 3 &

infinitely various, and therefore though the painting ' °

of the orchid in Mr. James s pure water-colour was ' J

i i and a fresh and breezy seascape by Henry Moore,

an experiment interesting and courageous, and 3_1 3 3

within reasonable limits successful, that work was The German section seemed with that of England

but one phase, and far from the most important t0 possess the most distinct mark of nationality,

one, of a career and of a talent full already of Tt was some years ago the fashion t0 hold thal

Frederick \\ edmore, suredly, is no longer so ; there is now intense depth

(From our own Correspondents.) but none the less interesting and certainly none the

less German for that. The roll of German exhibits

exclusiveness is a snobbish and
undesirable commodity ; in art and

%^ A kindred matters it is, rightly inter- Hans Thoma had amongst his pictures at least

preted, the reverse. The charm one done in quite his happiest manner. He is so

of anything upon which the eye is intended to feast, unmistakably German, imbued with that homely

a stylish room, a collection of art-objects, or such- warmth and simplicity which are still to be met

like, lies not only in what there is, but also in with in Germany. Of his double portrait of him-

what there is not. It was an objection to the self and his wife nothing but good can be said;

Copenhagen Exhibition of International Art, that there is something so amiable, so convincing, so
266