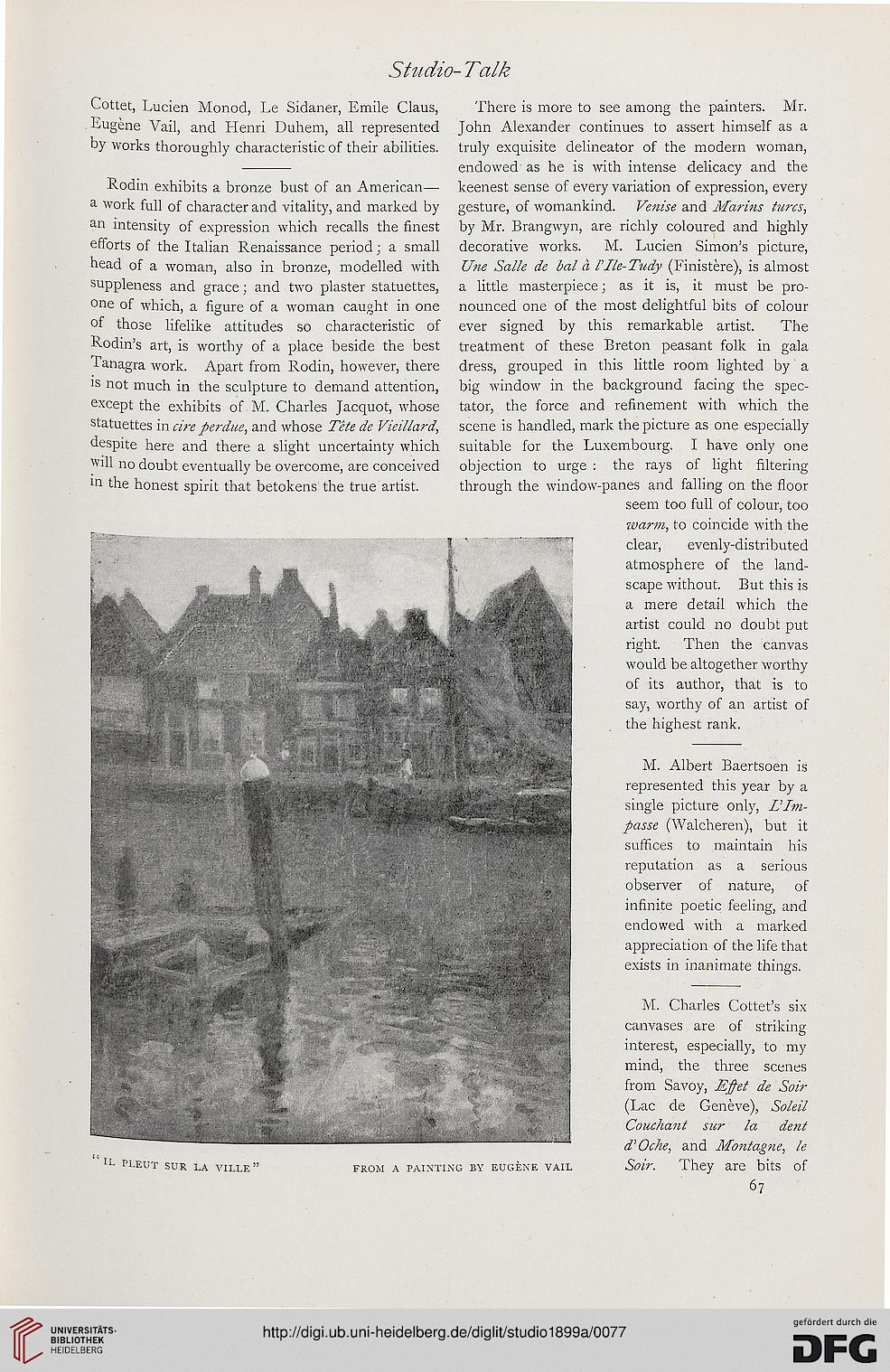 Cottet, Lucien Monod, Le Sidaner, Emile Claus, There is more to see among the painters. Mr.
Eugene Vail, and Henri Duhem, all represented John Alexander continues to assert himself as a
by works thoroughly characteristic of their abilities, truly exquisite delineator of the modem woman,

- endowed as he is with intense delicacy and the

Rodin exhibits a bronze bust of an American— keenest sense of every variation of expression, every
a work full of character and vitality, and marked by gesture, of womankind. Venise and Marins hires,
an intensity of expression which recalls the finest by Mr. Brangwyn, are richly coloured and highly
efforts of the Italian Renaissance period; a small decorative works. M. Lucien Simon's picture,
head of a woman, also in bronze, modelled with Une Salle de bal a TIle-Tudy (Finistere), is almost
suppleness and grace; and two plaster statuettes, a little masterpiece; as it is, it must be pro-
one of which, a figure of a woman caught in one nounced one of the most delightful bits of colour
of those lifelike attitudes so characteristic of ever signed by this remarkable artist. The
Rodin's art, is worthy of a place beside the best treatment of these Breton peasant folk in gala
Tanagra work. Apart from Rodin, however, there dress, grouped in this little room lighted by a
is not much in the sculpture to demand attention, big window in the background facing the spec-
except the exhibits of M. Charles Jacquot, whose tator, the force and refinement with which the
statuettes in eireperdue, and whose Tete de Vieillard, scene is handled, mark the picture as one especially
despite here and there a slight uncertainty which suitable for the Luxembourg. I have only one
will no doubt eventually be overcome, are conceived objection to urge : the rays of light filtering
m the honest spirit that betokens the true artist. through the window-panes and falling on the floor

seem too full of colour, too
ivarm, to coincide with the
clear, evenly-distributed
atmosphere of the land-
scape without. But this is
a mere detail which the
artist could no doubt put
right. Then the canvas
would be altogether worthy
of its author, that is to
say, worthy of an artist of
the highest rank.

M. Albert Baertsoen is
represented this year by a
single picture only, Elm-
passe (Walcheren), but it
suffices to maintain his
reputation as a serious
observer of nature, of
infinite poetic feeling, and
endowed with a marked
appreciation of the life that
exists in inanimate things.

IL PLEUT SUR LA VILLE" FROM A PAINTING BY EUGENE VAIL Soir. They are bitS of