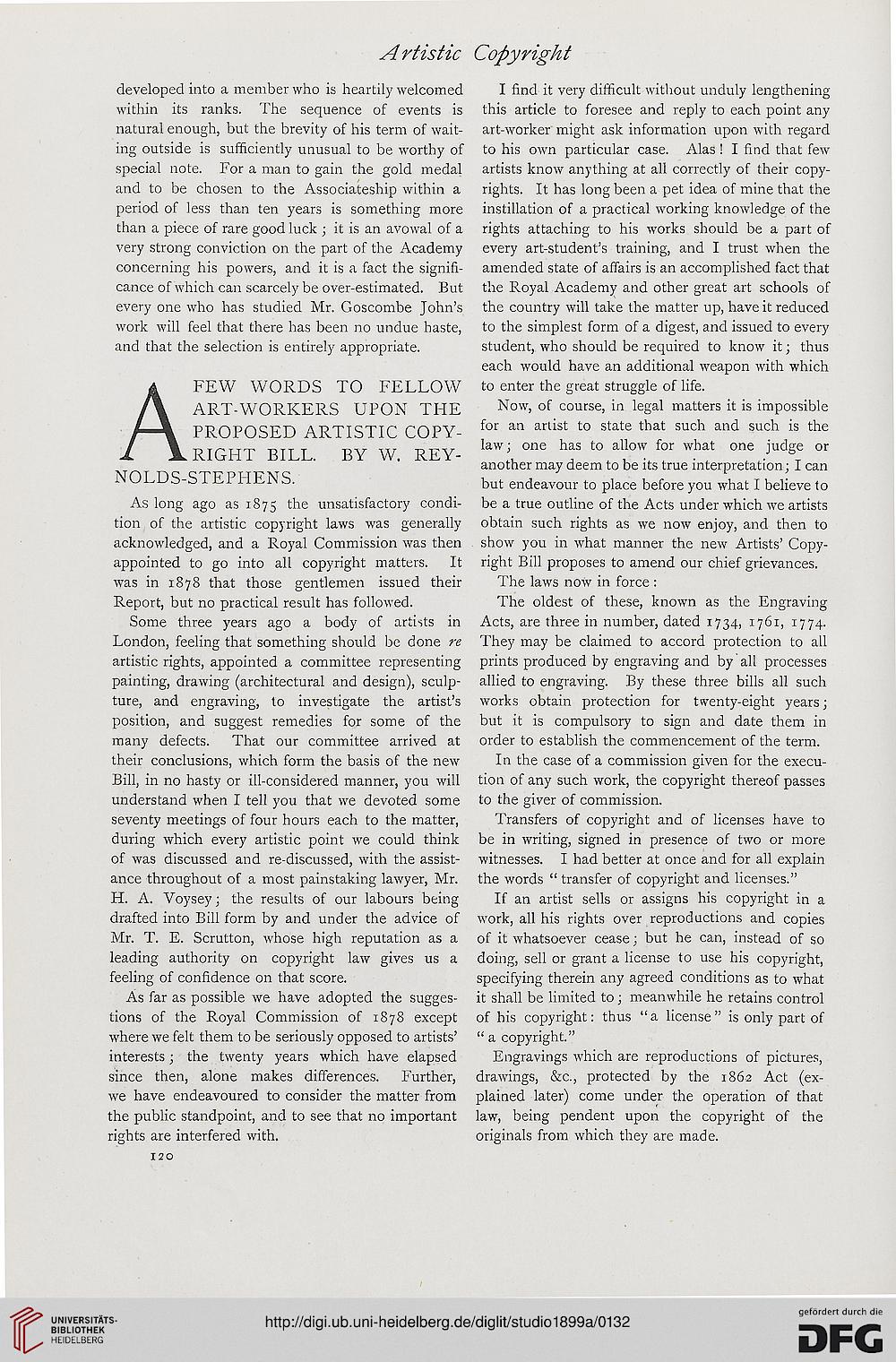 developed into a member who is heartily welcomed
within its ranks. The sequence of events is
natural enough, but the brevity of his term of wait-
ing outside is sufficiently unusual to be worthy of
special note. For a man to gain the gold medal
and to be chosen to the Associateship within a
period of less than ten years is something more
than a piece of rare good luck ; it is an avowal of a
very strong conviction on the part of the Academy
concerning his powers, and it is a fact the signifi-
cance of which can scarcely be over-estimated. But
every one who has studied Mr. Goscombe John's
work will feel that there has been no undue baste,
and that the selection is entirely appropriate.

As long ago as 1875 the unsatisfactory condi-
tion of the artistic copyright laws was generally
acknowledged, and a Royal Commission was then
appointed to go into all copyright matters. It
was in 1878 that those gentlemen issued their
Report, but no practical result has followed.

Some three years ago a body of artists in
London, feeling that something should be done ?-e
artistic rights, appointed a committee representing
painting, drawing (architectural and design), sculp-
ture, and engraving, to investigate the artist's
position, and suggest remedies for some of the
many defects. That our committee arrived at
their conclusions, which form the basis of the new
Bill, in no hasty or ill-considered manner, you will
understand when I tell you that we devoted some
seventy meetings of four hours each to the matter,
during which every artistic point we could think
of was discussed and re-discussed, with the assist-
ance throughout of a most painstaking lawyer, Mr.
H. A. Voysey; the results of our labours being
drafted into Bill form by and under the advice of
Mr. T. E. Scrutton, whose high reputation as a
leading authority on copyright law gives us a
feeling of confidence on that score.

As far as possible we have adopted the sugges-
tions of the Royal Commission of 1878 except
where we felt them to be seriously opposed to artists'
interests; the twenty years which have elapsed
since then, alone makes differences. Further,
we have endeavoured to consider the matter from
the public standpoint, and to see that no important
rights are interfered with.
120

I find it very difficult without unduly lengthening
this article to foresee and reply to each point any
art-worker might ask information upon with regard
to his own particular case. Alas ! I find that few
artists know anything at all correctly of their copy-
rights. It has long been a pet idea of mine that the
instillation of a practical working knowledge of the
rights attaching to his works should be a part of
every art-student's training, and I trust when the
amended state of affairs is an accomplished fact that
the Royal Academy and other great art schools of
the country will take the matter up, have it reduced
to the simplest form of a digest, and issued to every
student, who should be required to know it; thus
each would have an additional weapon with which
to enter the great struggle of life.

Now, of course, in legal matters it is impossible
for an artist to state that such and such is the
law; one has to allow for what one judge or
another may deem to be its true interpretation; I can
but endeavour to place before you what I believe to
be a true outline of the Acts under which we artists
obtain such rights as we now enjoy, and then to
show you in what manner the new Artists' Copy-
right Bill proposes to amend our chief grievances.

The laws now in force :

The oldest of these, known as the Engraving
Acts, are three in number, dated 1734, 1761, 1774.
They may be claimed to accord protection to all
prints produced by engraving and by all processes
allied to engraving. By these three bills all such
works obtain protection for twenty-eight years;
but it is compulsory to sign and date them in
order to establish the commencement of the term.

In the case of a commission given for the execu-
tion of any such work, the copyright thereof passes
to the giver of commission.

Transfers of copyright and of licenses have to
be in writing, signed in presence of two or more
witnesses. I had better at once and for all explain
the words "transfer of copyright and licenses."

If an artist sells or assigns his copyright in a
work, all his rights over reproductions and copies
of it whatsoever cease; but he can, instead of so
doing, sell or grant a license to use his copyright,
specifying therein any agreed conditions as to what
it shall be limited to; meanwhile he retains control
of bis copyright: thus "a license" is only part of
" a copyright."

Engravings which are reproductions of pictures,
drawings, &c, protected by the 1862 Act (ex-
plained later) come under the operation of that
law, being pendent upon the copyright of the
originals from which they are made.