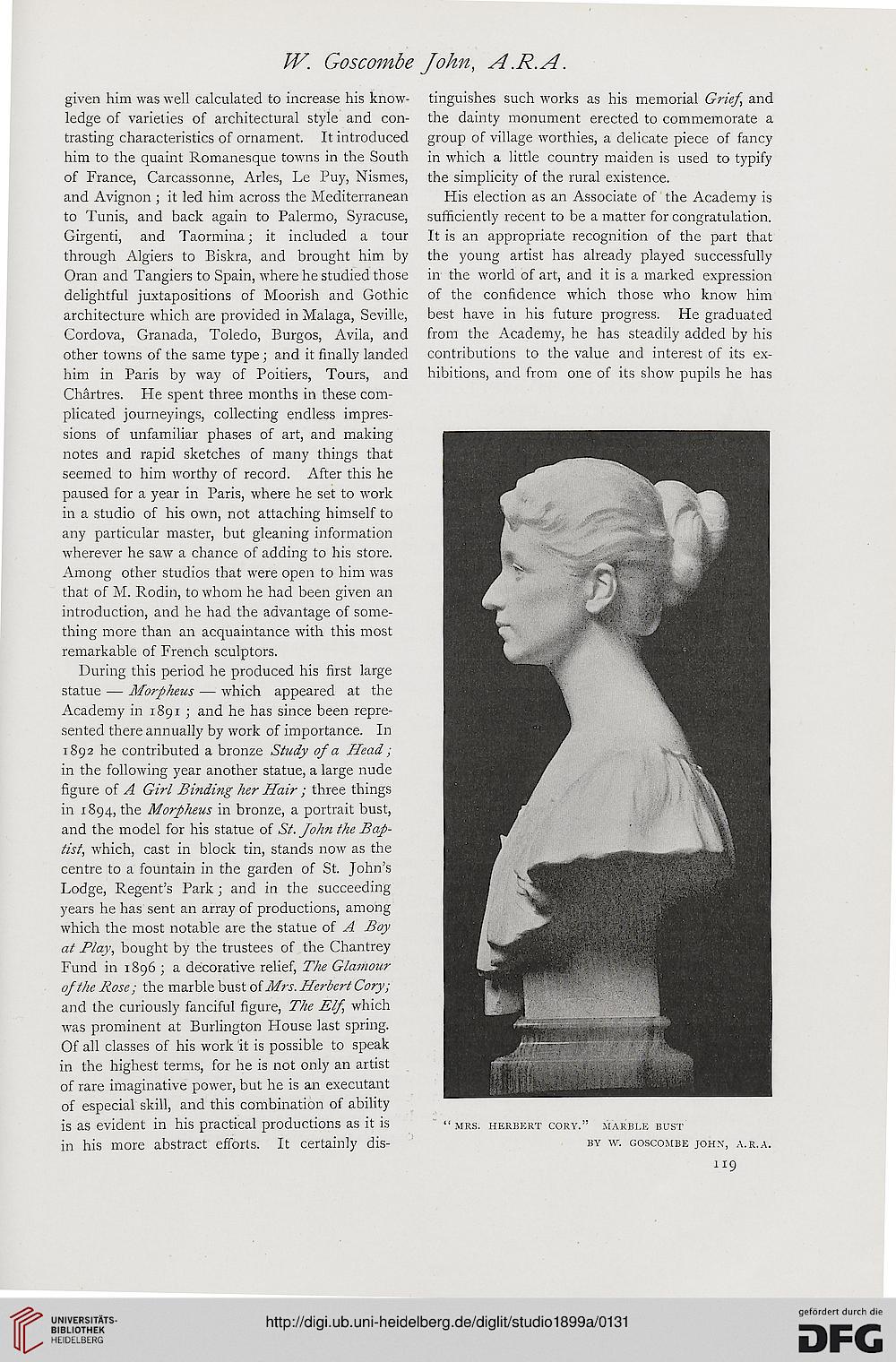 given him was well calculated to increase his know-
ledge of varieties of architectural style and con-
trasting characteristics of ornament. It introduced
him to the quaint Romanesque towns in the South
of France, Carcassonne, Aries, Le Puy, Nismes,
and Avignon ; it led him across the Mediterranean
to Tunis, and back again to Palermo, Syracuse,
Girgenti, and Taormina; it included a tour
through Algiers to Biskra, and brought him by
Oran and Tangiers to Spain, where he studied those
delightful juxtapositions of Moorish and Gothic
architecture which are provided in Malaga, Seville,
Cordova, Granada, Toledo, Burgos, Avila, and
other towns of the same type ; and it finally landed
him in Paris by way of Poitiers, Tours, and
Chaxtres. He spent three months in these com-
plicated journeyings, collecting endless impres-
sions of unfamiliar phases of art, and making
notes and rapid sketches of many things that
seemed to him worthy of record. After this he
paused for a year in Paris, where he set to work
in a studio of his own, not attaching himself to
any particular master, but gleaning information
wherever he saw a chance of adding to his store.
Among other studios that were open to him was
that of M. Rodin, to whom he had been given an
introduction, and he had the advantage of some-
thing more than an acquaintance with this most
remarkable of French sculptors.

During this period he produced his first large
statue — Morpheus — which appeared at the
Academy in 1891 ; and he has since been repre-
sented there annually by work of importance. In
1892 he contributed a bronze Study of a Head ;
in the following year another statue, a large nude
figure of A Girl Binding her Hair ; three things
in 1894, the Morpheus in bronze, a portrait bust,
and the model for his statue of St. John the Bap-
tist, which, cast in block tin, stands now as the
centre to a fountain in the garden of St. John's
Lodge, Regent's Park ; and in the succeeding
years he has sent an array of productions, among
which the most notable are the statue of A Boy
at Play, bought by the trustees of the Chantrey
Fund in 1896 ; a decorative relief, The Glamour
of the Rose; the marble bust of Mrs. Herbert Cory;
and the curiously fanciful figure, The Elf, which
was prominent at Burlington House last spring.
Of all classes of his work it is possible to speak
in the highest terms, for he is not only an artist
of rare imaginative power, but he is an executant
of especial skill, and this combination of ability
is as evident in his practical productions as it is
in his more abstract efforts. It certainly dis-

tinguishes such works as his memorial Grief, and
the dainty monument erected to commemorate a
group of village worthies, a delicate piece of fancy
in which a little country maiden is used to typify
the simplicity of the rural existence.

His election as an Associate of the Academy is
sufficiently recent to be a matter for congratulation.
It is an appropriate recognition of the part that
the young artist has already played successfully
in the world of art, and it is a marked expression
of the confidence which those who know him
best have in his future progress. He graduated
from the Academy, he has steadily added by his
contributions to the value and interest of its ex-
hibitions, and from one of its show pupils he has