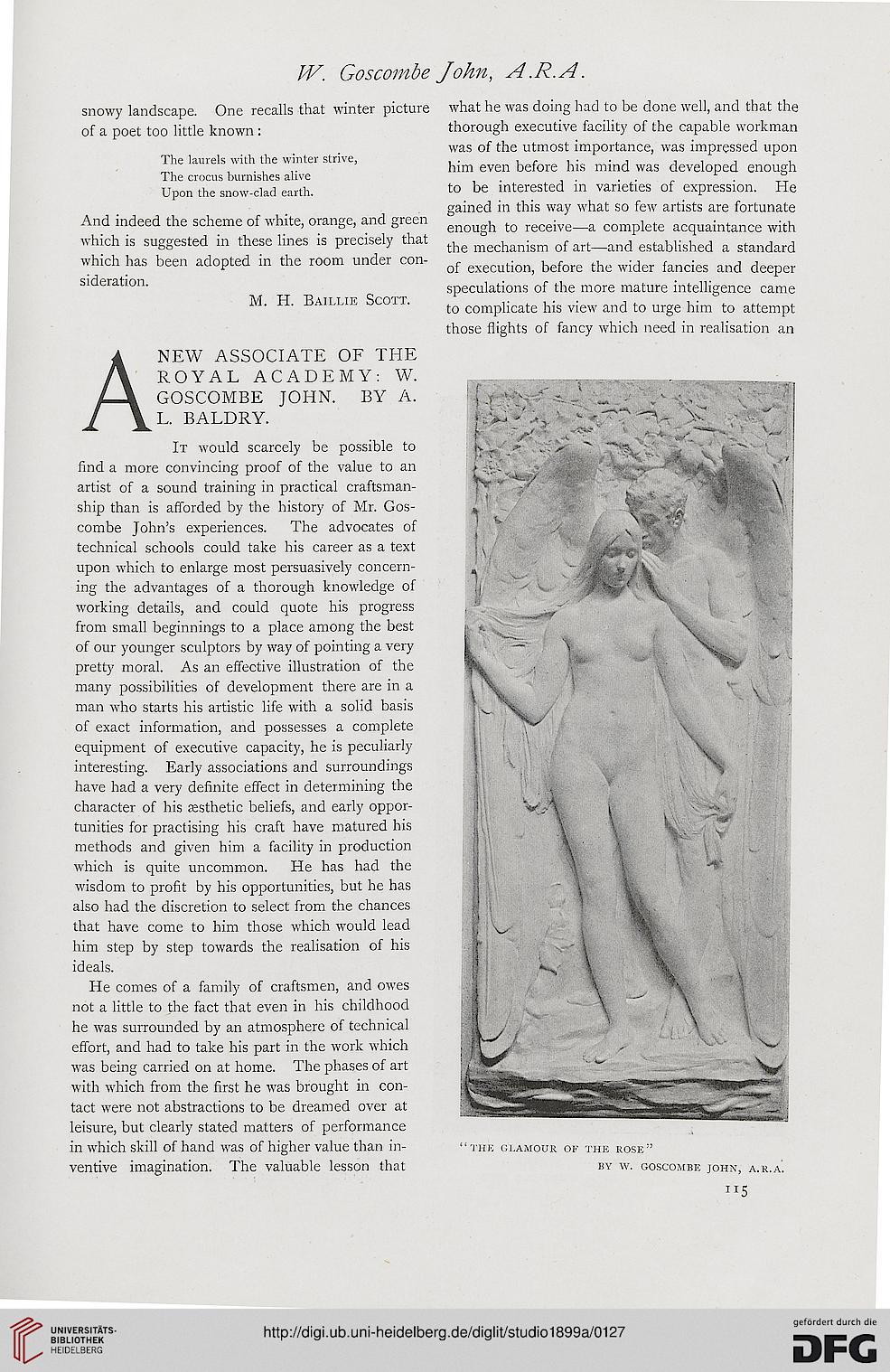 snowy landscape. One recalls that winter picture
of a poet too little known:

The laurels with the winter strive,
The crocus burnishes alive
Upon the snow-clad earth.

And indeed the scheme of white, orange, and green
which is suggested in these lines is precisely that
which has been adopted in the room under con-
sideration.

ANEW ASSOCIATE OF THE
ROYAL ACADEMY: W.
GOSCOMBE JOHN. BY A.
L. BALDRY.

It would scarcely be possible to
find a more convincing proof of the value to an
artist of a sound training in practical craftsman-
ship than is afforded by the history of Mr. Gos-
combe John's experiences. The advocates of
technical schools could take his career as a text
upon which to enlarge most persuasively concern-
ing the advantages of a thorough knowledge of
working details, and could quote his progress
from small beginnings to a place among the best
of our younger sculptors by way of pointing a very
pretty moral. As an effective illustration of the
many possibilities of development there are in a
man who starts his artistic life with a solid basis
of exact information, and possesses a complete
equipment of executive capacity, he is peculiarly
interesting. Early associations and surroundings
have had a very definite effect in determining the
character of his aesthetic beliefs, and early oppor-
tunities for practising his craft have matured his
methods and given him a facility in production
which is quite uncommon. He has had the
wisdom to profit by his opportunities, but he has
also had the discretion to select from the chances
that have come to him those which would lead
him step by step towards the realisation of his
ideals.

He comes of a family of craftsmen, and owes
not a little to the fact that even in his childhood
he was surrounded by an atmosphere of technical
effort, and had to take his part in the work which
was being carried on at home. The phases of art
with which from the first he was brought in con-
tact were not abstractions to be dreamed over at
leisure, but clearly stated matters of performance
in which skill of hand was of higher value than in-
ventive imagination. The valuable lesson that

what he was doing had to be done well, and that the
thorough executive facility of the capable workman
was of the utmost importance, was impressed upon
him even before his mind was developed enough
to be interested in varieties of expression. He
gained in this way what so few artists are fortunate
enough to receive—a complete acquaintance with
the mechanism of art—and established a standard
of execution, before the wider fancies and deeper
speculations of the more mature intelligence came
to complicate his view and to urge him to attempt
those flights of fancy which need in realisation an

"THE GLAMOUR OF THE ROSE"